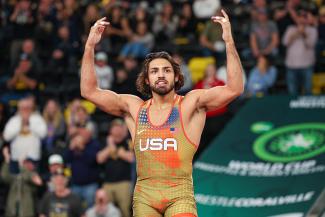 CORALVILLE, Iowa (December 11) -- The USA claimed its 15th World Cup after beating Iran 6-4 in the final Sunday. In a thrilling dual, It was tied at 3-3 after Ali SAVADKOUHI (IRI) stunned everyone by beating Jordan BURROUGHS (USA) at 79kg. But Kyle SNYDER (USA) sealed it with a 5-0 win over Kamran GHASEMPOUR (IRI) at 97kg,

Earlier, Ukraine defeated China 6-4 to clinch the women's World Cup. A story that will be told for years to come.

19:50: Amirreza MASOUMI (IRI) hands Hayden ZILLMER (USA) a 6-1 loss at 125kg but it only makes the scoreline closer. The USA wins the World Cup with a 6-4 score, its 15th World Cup title. What a final. It went down to the wire and a historic moment at 79kg.

19:35: Time for Kyle SNYDER (USA) vs Kamran GHASEMPOUR (IRI) at 97kg. Ghasempour needs to win this to keep Iran in the final. Snyder is the aggressive wrestler and is rewarded for that with a point for Ghasempour's passivity. He leads 1-0 at the break. Ghasempour is feeling the heat of this weight class. Snyder is warned for passivity but he scores a stepout soon. Snyder with another stepouts to lead 3-0. Snyder brings Ghasempour forward but picks the ankle for a takedown. He leads 5-0. That will be the win and the World Cup for the USA!

19:22: Amirhossein FIROUZPOUR (IRI) needs to win this bout against Nathan JACKSON (USA) at 92kg. Jackson with a double leg for four before giving up a stepout. He leads 4-1. Firouzpour circles over Jackson in the danger zone and gets two. The USA challenges the call. It's just one point and par terre for Firouzpour. He tries the gut and gets stuck, reversal for Jackson. He leads 6-2 at the break. Firouzpour is getting tired and is unable to finish his attacks. A lift for two but he gives up a takedown late in the bout and goes down 8-4. The USA now leads 5-3.

19:15: Zahid VALENCIA (USA) gets two takedowns and an activity point. He leads 5-0 against Alireza KARIMI (IRI). Karimi gets a stepout. A late takedown for Karimi but he cannot get the turn. Valencia wins 5-3 at 86kg.

19:00: Now at 79kg. Ali SAVADKOUHI (IRI) and Jordan BURROUGHS (USA) are on the mat. Iran is thinking about that Yasar Dogu match in which Burroughs won by only a point. Savadkouhi begins well and Burroughs put on the clock. With 2 seconds remaining, Burroughs hits the double and gets a turn. 4-0 lead at the break for Burroughs. Savadkouhi gets a takedown in the second period. He cuts the gap to 4-2. He adds another and a turn to lead 6-4. His teammates are pumped now. Burroughs has around a minute to score two points. Savadkouhi is holding his lead. Burroughs with a stepout and fleeing. Savadkouhi holds criteria 6-6. He wins. Savadkouhi has beaten Burroughs!

18:52: This is a huge win for Iran! U23 world champion Mohmmadsadegh FIROUZPOUR (IRI) beats Jason NOLF (USA) 2-1 at 74kg. Nolf led 1-0 for passivity but Firouzpour scored a takedown in the second activity period and kept the lead. USA 3-2 Iran.

18:38: Alec PANTALEO (USA) and Amirmohammad YAZDANI (IRI) at 70kg. This is not a great match-up for Yazdani as Pantaleo is a very physical wrestler with no passive wrestling. He gets on the single leg first and scores a takedown. Stepout for Yazdani. Pantaleo scores another takedown to start the second period. Yazdani needs to up his attack with just a minute remaining. Pantaleo attacks in the dying seconds but Yazdani reverses it and is looking for a turn and he gets it. 5-4 for Yazdani. Pantaleo challenges saying his head was out. The USA wins the challenge. Pantaleo wins 4-3. The USA leads 3-1

18:25: Rematch of the World Championships final as Rahman AMOUZAD (IRI) takes on John DIAKOMIHALIS (USA). Amouzad fails to get his underhook but gets to a single leg and scores the first takedown. He leads 2-0 at the break. Diakomihalis gets outside and converts it into a takedown. He goes duckunder. Another two for Diakomihalis. That was quick. Another attempt but this time Amouzad was ready, he gets exposure. Amouzad leads 4-4 on criteria. A minute remaining now. Amouzad with a stepout. Diakomihalis almost got the takedown but Amouzad wins 5-4.

18:18: Seth GROSS (USA) at 61kg against Ebrahim ELAHI (IRI). Gross was fifth at the World Championships while Elahi was the U17 world champion. Gross with a go behind and gets the two. Gross works his position and gets the turn. He adds three more and wins 10-0. The USA leads 2-0.

18:08: Zane RICHARDS (USA) and Reza MOMENIJOUJADEH (IRI) wrestle at 57kg. Richards gets the first takedown. Momenijoujadeh ends the period with a stepout. Richards leads 2-1 at the break. Momeni with a duck under but Richards stands on his feet and exposure! Richards leads 4-1 now. Momeni has got in good positions time and against but Richards with some crafty defense. He ends the bout with another takedown and the win.

What a story this has been for Ukraine. After all the difficulties, the women's team has won the World Cup to cap off a stunning year in which it finishes on the podium of two World Championships and top-five in Belgrade. First World Cup title for Ukraine. All the players are emotional.

17:40: Ukraine wins the World Cup! What an incredible performance from the team. A 6-4 win over China in the final. Juan WANG (CHN) needed a fall but Anastasiia OSNIACH SHUSTOVA (UKR) won the 76kg bout 9-5.

17:25: QIANDEGENCHAGAN (CHN) gave it all against Alla BELINSKA (UKR) at 72kg and secured a 9-1 win for three classification points. But Juan WANG (CHN) will need to beat Anastasiia SHUSTOVA (UKR) via fall at 76kg to win this for China.

17:12: China is without its veteran Feng ZHOU (CHN) at 68kg. Will this hurt it? Tetiana  RIZHKO (UKR) takes on Yue HAN (CHN), who has been in Zhou's shadow for a long time. Rizhko with a takedown to lead 2-0. But Han also scores one and gets a turn from lace to lead 4-2 at the break. Rizhko with an inside trip for two and a caution against Han for finger-grabbing. Rizhko leads 5-4 with under a minute remaining. Han cannot find a way and Rizhko wins it. Fifth win for Ukraine and it has more or less sealed it.

17:00: 12 points in the first 90 seconds of the 65kg bout between Jia LONG (CHN) and Kateryna ZELENYKH (UKR) who leads 8-4. But Long closes the gap to 8-6 with a takedown. A double leg from Zelenykh for two more. She leads 10-6 at the break. Zelenykh locks Long's arm and drags her down for another takedown to extender her lead 12-6. Long with two go-behinds to bring the match down to 12-10 with 40 seconds remaining. A few fake shots and Zelenykh loses her balance and Long capitalizes by putting her on the back. Zelenykh leads 12-12 but Long gets the fall with 2 seconds remaining. What a twist.

16:53: Olympic bronze medalist Iryna KOLIADENKO (UKR) gets Xinyuan SUN (CHN) into a cradle and gets the fall in two minutes and 16 seconds. Ukraine is running away with this now. It now leads 4-2. China has to win all remaining four bouts

16:45: The action moves to 59kg. Iryna BONDAR (UKR) takes on Qi ZHANG (CHN) to take Ukraine closer to the title. She opens the scoring with a takedown in the danger zone. Zhang answers with a grand-amplitude move for five! She catches Bondar and launches a suplex. She scores a takedown in the second period to win 7-2. An important win for China as it cuts the lead to 3-2

16:37: A 90-second fall for Yulia TAKCH (UKR)! The veteran stepped over Yongxin FENG (CHN) and managed to pancake her long enough for the referee to call the fall. Ukraine with 5 classification points and a 3-1 lead in this World Cup final.

16:32: The wrestlers are leaving it all on the mat. At 55kg, Qianyu PANG (CHN) and Alina HRUSHYNA (UKR) did not let either score any points. Hrushyna led 2-1 on passivity with 30 seconds remaining and Pang needs a point to win. She tried head pinching but gave up a takedown and Hrushyna won 4-1 at 55kg. Ukraine leads 2-1.

16:22: Another thrilling bout and China has pulled back things. Li DENG (CHN) scored a takedown in the first period and decided to defend that 2-0 lead against Albina RILLIA (UKR). She was called passive in the second period for one point but Deng won 2-1.

16:10: First up is Oksana LIVACH (UKR) against Jiang ZHU (CHN) at 50kg. Livach uses her strong defense but Zhu with a takedown in the first period. She gets another in the second to lead 4-0. Livach with a four with 30 seconds remaining and winning the opening bout of the final.

15:55: Welcome to the World Cup finals. China is ready. Ukraine is ready. The women's World Cup winner will be decided in about two hours