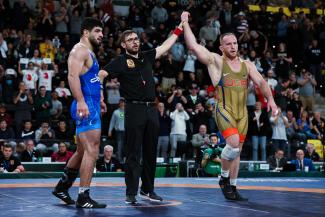 But all that changed when Ali SAVADKOUHI (IRI) used a takedown to gut in a 6-6 criteria win over Burroughs in the World Cup in Iowa on Sunday.

Beating Burroughs in his home country made it even more special for Savadkouhi who became the first Iranian wrestler to beat the 2012 Olympic champion whose career has spanned around 15 years.

The Asian champion may have broken new ground by joining the list, which only has five other wrestlers, to win against Burroughs, but his feat was not enough to guide Iran to the World Cup title as it lost the final to the USA 6-4 and finished second.

The USA, led by world champion Kyle SNYDER (USA), won three straight bouts after the Burroughs loss to claim its 15th World Cup. It caps off an incredible year for the USA freestyle team which also won the team title at the World Championships in Belgrade in September.

Ukraine won the women's World Cup as it stunned China 6-4 in the final and became the first European team to win the coveted trophy.

After beating Mongolia and Georgia in the group stage Saturday, the USA waited for its opponent from the other group. Iran defeated Japan and the All-World team to set a clash against the hosts.

The final began in front of a partisan Iowa crowd that cheered every point by an American wrestler. It cheered the most when Burroughs hit a double on Savadkouhi just before the activity clock expired. He also got a lace to make his score 4-0.

"I knew I was down," Savadkouhi said. "But I was thinking of moving forward and being offensive. I lost one opportunity to score. But I knew from the first minute that he will make a mistake."

Savadkouhi was speaking from experience as he had Burroughs on the line at the Yasar Dogu Ranking Series event in Istanbul in February. He was on his way to winning the bout as Burroughs was put on the activity clock in the final minute but Savadkouhi pulled the singlet and was penalized for it and lost. 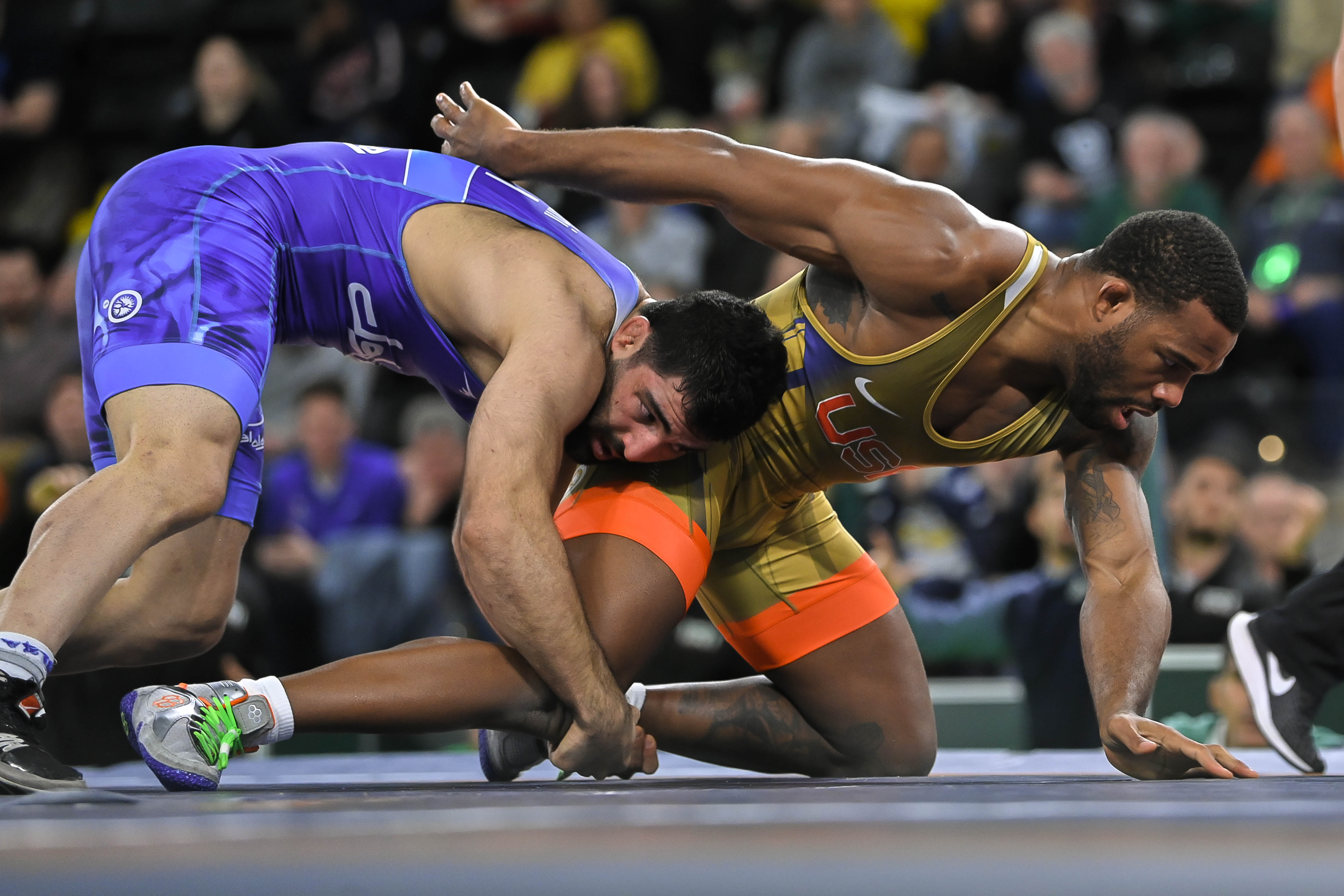 In Iowa, he did not make a mistake. He went on an outside single and scored the takedown to cut the lead to 4-2. Burroughs took time to return to neutral, showing signs of tiredness. Savadkouhi pushed more from here and 15 seconds later scored another takedown. He did not let Burroughs settle down in par terre and turned him, a rare sight, to add two more.

From here, he had to defend the two-point lead for more than a minute. Burroughs tried but could not find a breakthrough. He pushed Savadkouhi out of bounds and got one point for fleeing to make it 6-6 but the Iranian still held criteria with nine seconds to go. 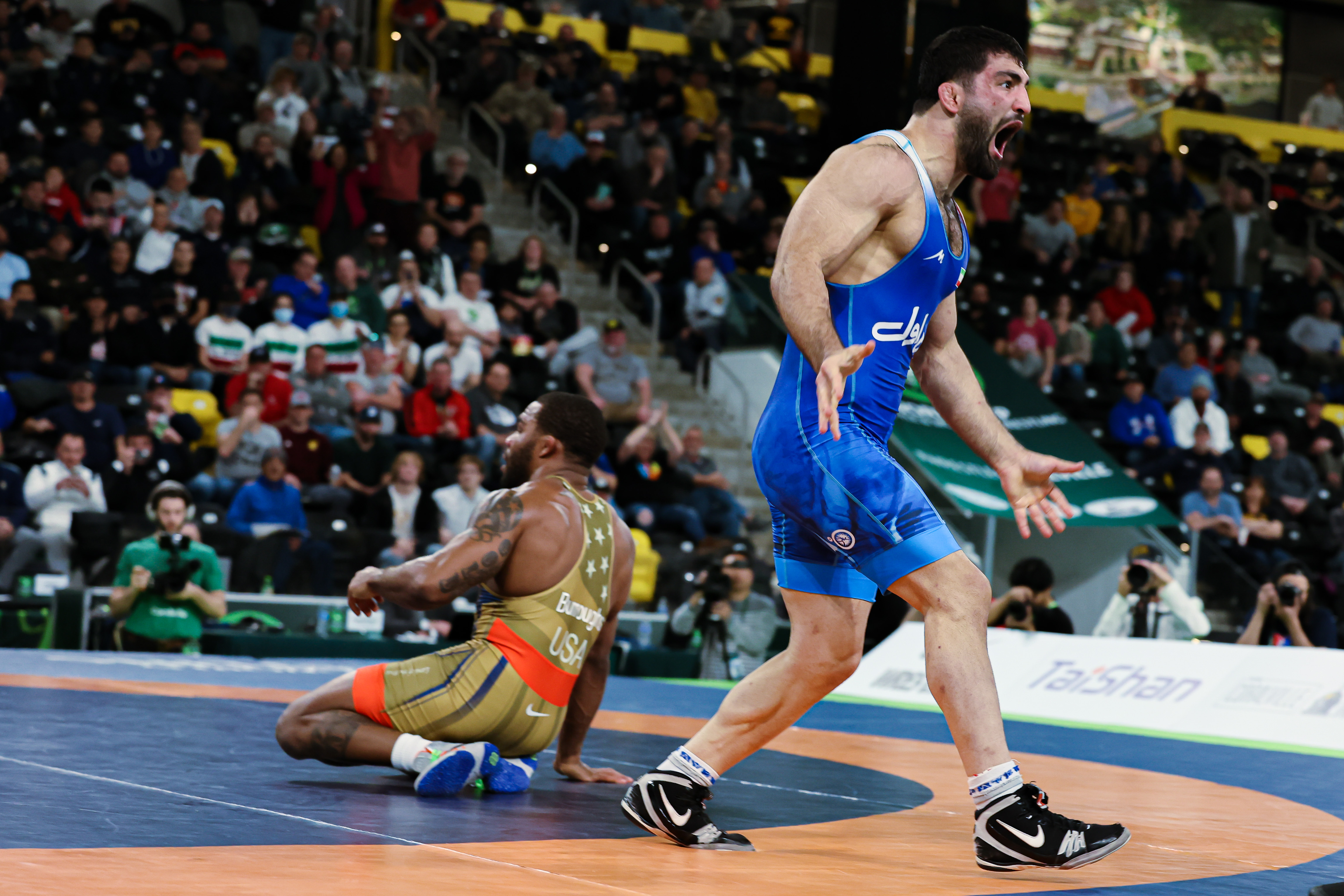 Savadkouhi managed to pass the time. He had achieved the unthinkable. He knew doing it in the US was special.

"I am happy to be the first Iranian to beat Burroughs and more importantly to win in his home country," he said. "I am blessed to be supported by Iranian people and the coaches."

Savadkouhi also talked about the confidence the Iran coaches had in him against Burroughs who had defeated Mohammad NOKHODI (IRI), who was in Iowa, in two finals at the World Championships.

"The coaches especially Pejman DOROSTKAR coach put more energy in me and he believed I will win," he said. 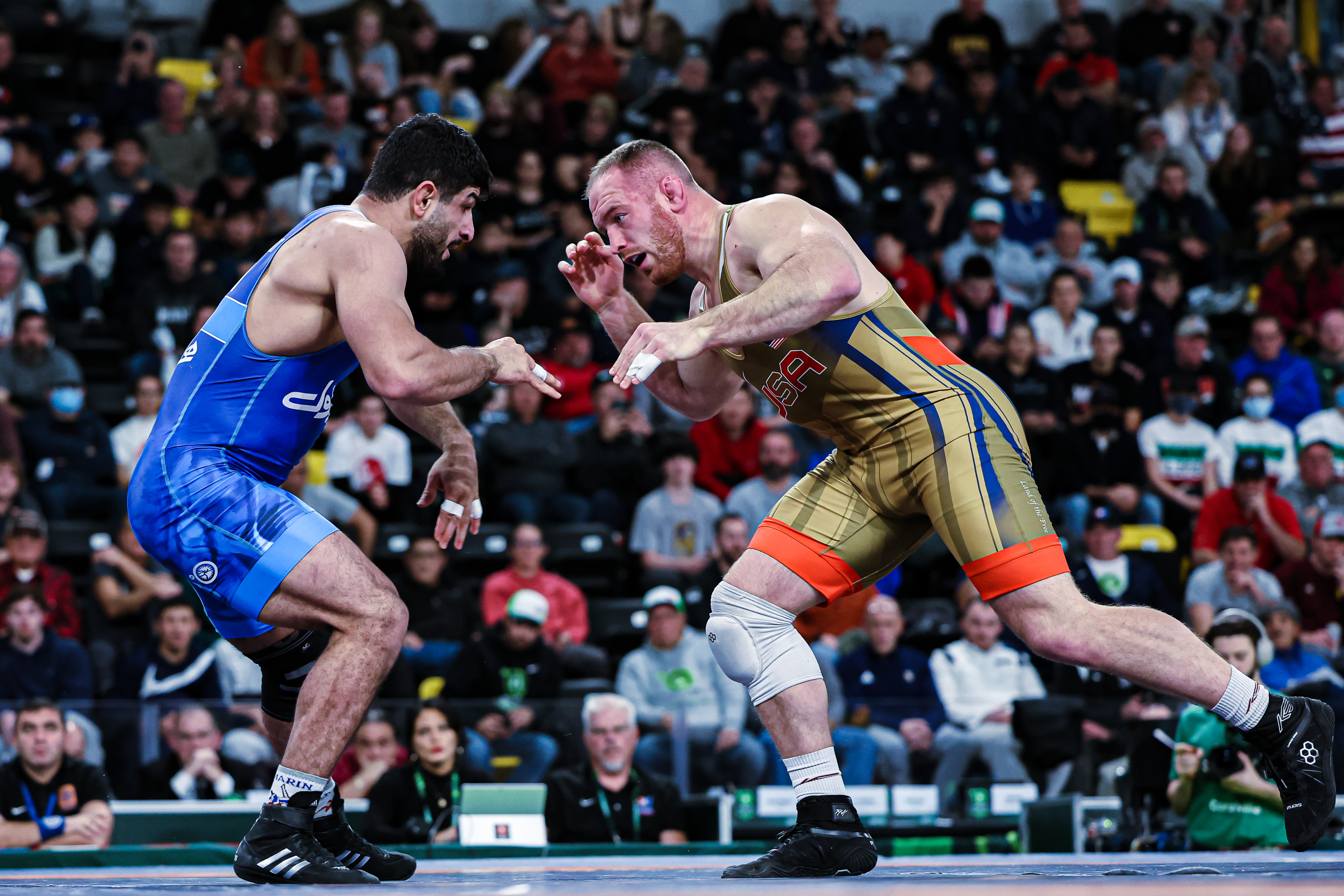 While Iran's gamble to wrestle Savadkouhi worked, another did not.

Two-time world champion at 92kg Kamran GHASEMPOUR (IRI) bumped up to 97kg to wrestle Snyder as Iran tried to go for an outright win. But that did not pay off.

Snyder, who won the World Championships in Belgrade, was clearly the bigger and better wrestler and Ghasempour never managed to threaten with an attack. Snyder scored three stepouts against a tiring Ghasempour and a takedown to complete the win.

The USA was off to a strong start in the dual as Zane RICHARDS (USA) got a 4-3 win over Reza MOMENIJOUJAD (IRI) at 57kg before Seth GROSS (USA) manhandled U17 world champion Ebrahim ELAHI (IRI) at 61kg in a 10-0 win.

It took world champion Rahman AMOUZAD (IRI) to win a rematch against John DIAKOMIHALIS (USA) at 65kg to put Iran on board. While the Belgrade final was a high-scoring affair, Amouzad and Diakomihalis were conservative in the match Sunday.

Amouzad scored a takedown but Diakomihalis was smart to not let him use the underhook to score stepouts. He then used two lighting fast duck-unders to take a 4-2 lead in the final. It looked like Amouzad was struggling to make a comeback but he scored via exposure and then added a late stepout to take a 5-4 lead and the win.

This should have put Iran in a strong position but Alec PANTALEO (USA) stunned Amirmohammad YAZDANI (IRI) at 70kg with a 4-3 win, keeping the momentum in the USA's favor. Yazdani gave up two takedowns and his offense never got going. In the dying moments, he scored exposure over Pantaleo and then got a turn but Pantaleo had his head outside the zone which resulted in no points for the turn.

With the USA leading 3-1, Mohmmadsadegh FIROUZPOUR (IRI) was under pressure to pull one back. He was facing Jason NOLF (USA) at 74kg and was the underdog. Nolf led 1-0 at the break for an inactivity point and Firouzpour was again put on the clock but this time he scored a takedown and defended that lead for the win.

Burroughs loss had made it 3-3 and Iran had a real shot at winning the World Cup. But Zahid VALENCIA (USA), with his swaying hair, defeated Alireza KARIMI (IRI) at 86kg before Nathan JACKSON (USA) beat U23 world champion Amirhossein FIROUZPOUR (IRI) at 92kg to all but seal the deal.

U23 world champion Amirreza MASOUMI (IRI) handed Hayden ZILLMER (USA) a 6-1 defeat as consolation at 125kg. Celebrating his win, he gestured his hands for the next one before symbolizing a crown on his head as if saying that he will be the next king of this weight class.

The All-World team, which came agonizingly close to making it to the final, came back Sunday to beat Georgia 8-2 and finish with a bronze medal at the World Cup on its debut. 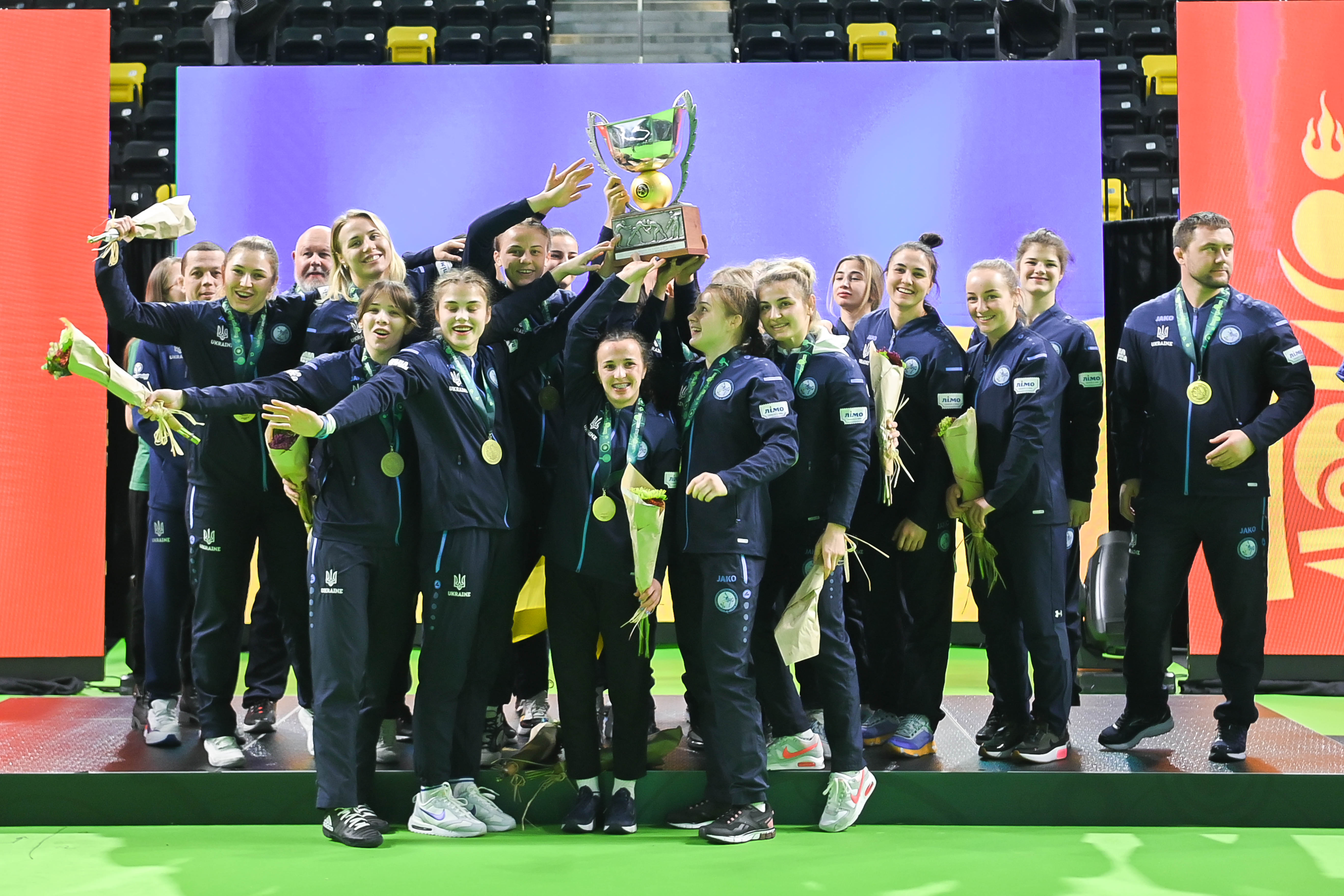 Over the weekend, Ukraine showed that it is right up there with the top women's wrestling nations. In a tough year with wrestlers struggling to find training bases and fighting an emotional battle, Ukraine not only qualified for the World Cup, but it also went on to win it.

Ukraine defeated the mighty China 6-4 in the final Sunday to claim its first-ever World Cup to cap off a successful year on a high. It did this a day after defeating women's wrestling powerhouse Japan to reach the final.

China, a close second to Japan when it comes to women's wrestling, was the favorite on paper but struggled with the high-paced and crafty wrestling of the Ukrainian team which had been in the US for the last three weeks.

The USA Wrestling, working along with the United World Wrestling, Olympic Solidarity, the National Olympic Committee of Ukraine and the USOC, invited the team for a camp before the World Cup at the Olympic Training Center in Colorado Springs. 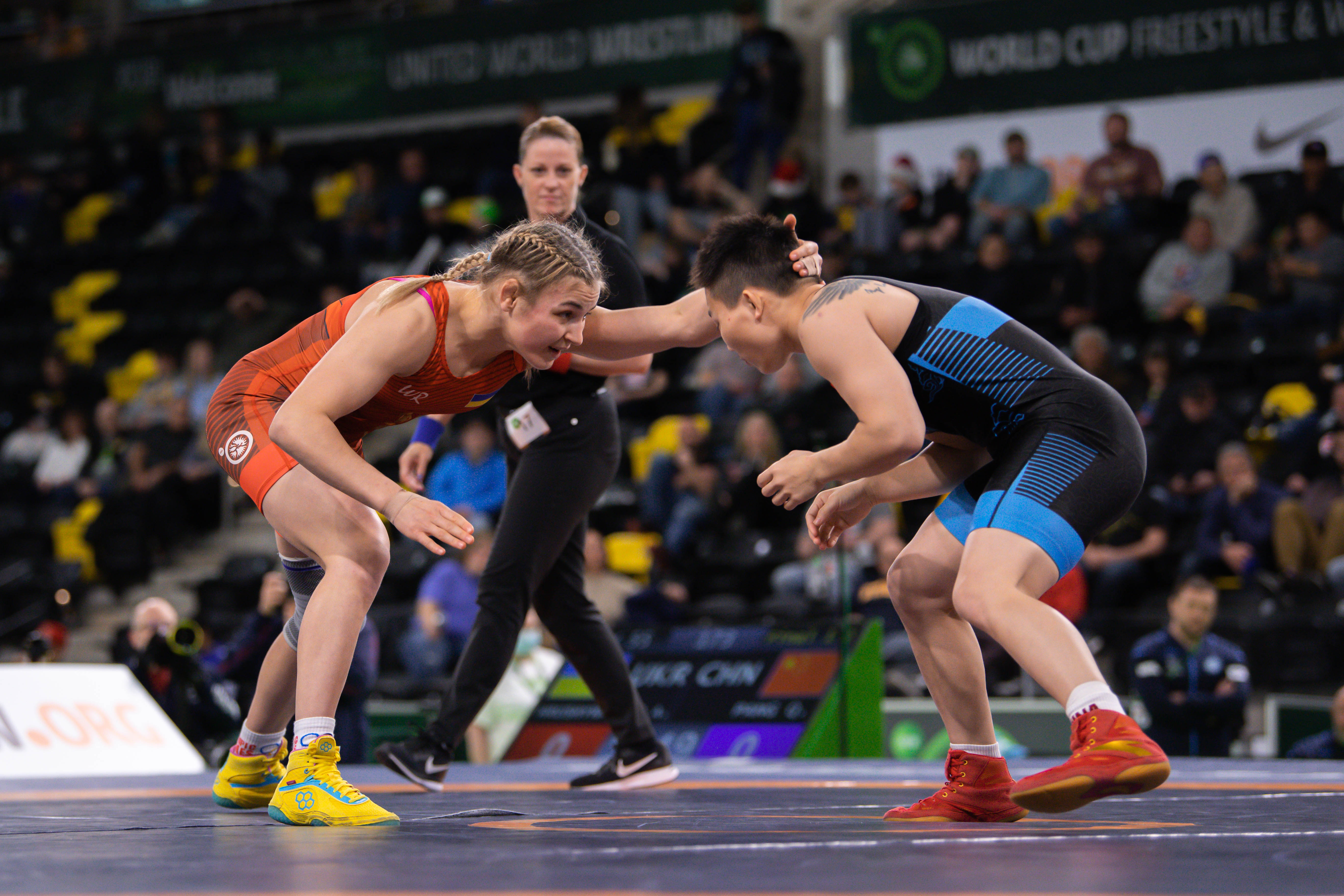 That seemed to have worked for Ukraine as it broke Japan's title defense on Sunday. Japan sent a fairly young team to Iowa as most of its stars decided to skip the tournament for the Emperor's Cup scheduled to be held December 22-25. It is the first step towards qualifying for the 2024 Paris Olympics.

In the final against China, there was no lack of support for the Ukraine team as the crowd at the Xtreme Arena continued to push the team with its cheering.

Oksana LIVACH (UKR) gave a dream start with a come-from-behind win at 50kg. Jiang ZHU (CHN) was on her way to win the bout when Livach unleashed a cool headlock for four and win the bout 4-4.

"I am very exhausted," she said after the win. "I am glad that I won for Ukraine. It is a very important win for us. The coaches said that I have to win the first match."

Hrushyna led 2-1 with three points being awarded for inactivity and Pang tried desperately for an attack in the final few seconds. She head-pinched Hrushyna, who was ready for it, defending the attempt with ease and scoring a takedown for a 4-1 win. 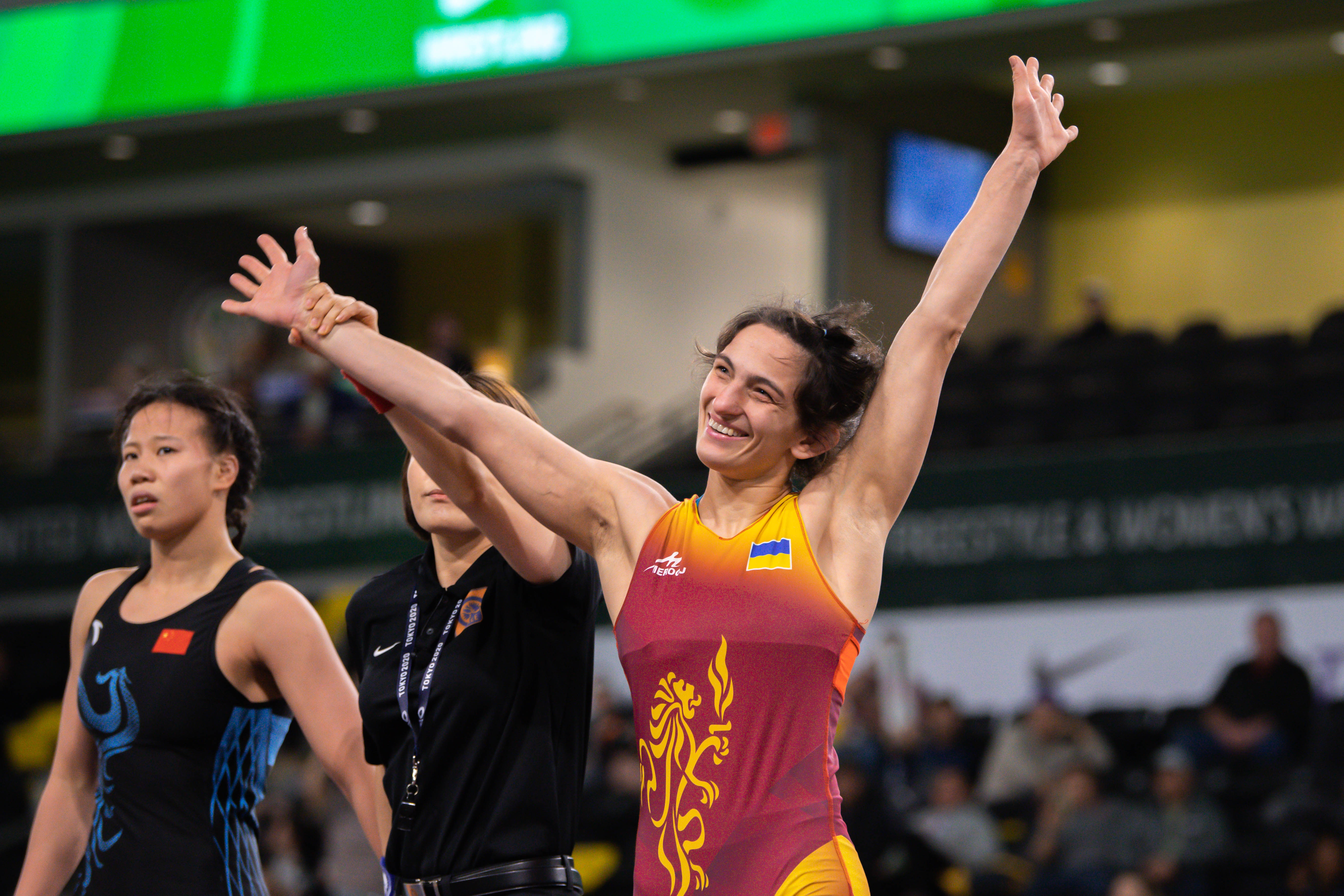 Veteran Yuliia TKACH (UKR) then got fall over Yongxin FENG (CHN) to swing it in Ukraine's favor. Qi ZHANG (CHN) did give China another chance by beating Iryna BONDAR (UKR) 7-2 at 59kg but that hope was short-lived as Iryna KOLIADENKO (UKR) put a cradle on Xinyuan SUN (CHN) for the fall inside the first period.

The two falls gave Ukraine a huge advantage if the dual was to end 5-5.

China was well aware of the scenario and Jia LONG (CHN) went all out against Kateryna ZELENYKH (UKR) at 65kg. In what will be the contender for the bout of the day, Long secured a fall despite being tossed twice for four-pointers. But she kept her composure and kept coming back and got a pin with two seconds remaining.

With Feng ZHOU (CHN) not available at 68kg, China banked on former world medalist Yue HAN (CHN) against  Tetiana SOVA RIZHKO (UKR). Han almost did the job and was on her way to a 4-2 win when Rizhko got a single leg for two and Han made an illegal hold during the attack to be penalized for one point.

Rizhko's 5-4 win made it difficult for China to think of winning the title. However, QIANDEGENCHAGAN (CHN) gave it a shot. She defeated Alla BELINSKA (UKR) 9-1 to leave Juan WANG (CHN) with only one option -- to win the 76kg bout via fall.

Wang did try that but Anastasiia SHUSTOVA (UKR) did not let it go for long. Shustova went on the offense and kept it up for the entire bout, winning 9-5 for an outright win.

Mongolia finished third in the World Cup after it beat the USA 7-3 in the morning session.