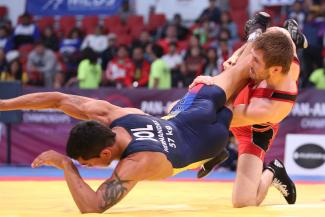 Led by a strong group of lightweights, the United States rattled off four-straight gold medals from 61kg to 74kg to outpace second-place Canada 78 to 58 points. Cuba pocketed third with 54 points.

Alfredo CISNEROS (CUB) started the finals with a scrappy 8-2 win over Zach SANDERS (USA) at 57kg. The match was pitched with head slaps, snap-downs and chippy encounters, but by bouts end it was Ciserno’s double leg finishes and counter offense proved too much for Sanders.

Despite Cuba’s opening win, the Stars and Stripes found the top of the podium for the much of the afternoon, winning six of the remaining seven gold medals.

Andrew HOCHSTRASSER (61kg) started the rally by locking up two chest wraps and three consecutive leg laces to earn the 10-0 technical fall against Colombia’s Wilmar (HERNANDEZ).  Jason CHAMBERLAIN (USA) followed up with a workman-like 4-0 decision over Abel HERRERA (PER). The Peruvian wrestler lost two takedowns, but showed flashes of offense and solid defense throughout. 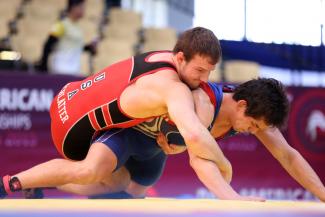 Tyler CALDWELL (USA) made four straight gold medals for the United States, ousting Jevon BALFOUR (CAN), 9-0 in the 74kg finals. Dustin KILGORE added a fifth gold at 97kg with a 6-2 decision over Abraham CONYEDO (CUB) and Zach REY (USA) used a cradle in the second period to beat Andres RAMOS (Cub)

The United State’s impressive winning streak was only interrupted when the Cuba’s Yurieski TORREBLANCA bested Chris PERRY, 4-1 to take the 86kg gold.

The next United World Wrestling continental championship will be the Asian Senior Championships May 6-10 in Doha, Qatar. For more information on all upcoming competitions visit UnitedWorldWrestling.org/events.