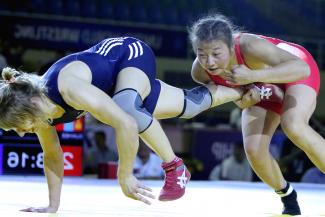 TASHKENT (September 10) – Aline FOCKEN (GER) foiled Japan’s bid to win three titles on the first night of women’s events at the world wrestling championships with a late takedown for a 5-4 triumph in the final bout of the evening.

Trailing 3-4 with only 20 seconds remaining in the 69kg final, Focken dragged 2013 world bronze medalist Sara DOSHO (JPN) by and followed up with a takedown from behind at the Gymnastics Palace for the 5-4 win.

“I can’t believe it!” the 23-year-old student from Krefeld said after her victory. “If I can sleep tonight, I will try to understand it all in the morning.”

Germany’s last wrestling world champion, in any style, was Brigitte WAGNER (GER), who won the 48kg crown in 2002 in Chalkida, Greece – also with a last-second scoring technique.

In other finals, Eri TOSAKA (JPN) repeated as world champion at 48kg and Chiho HAMADA (JPN) kept the 55kg title in Japan for the 13th year in a row. SUKHEE Tserenchimed (MGL) also became Mongolia’s second-ever world champion in female wrestling with a 12-3 win at 59kg.

Sukhee started slow in the 60kg final but finished strong with a variety of low-level attacks against London 2012 Olympic Games bronze medalist Yulia RATKEVICH (AZE) for a 12-3 victory.

Mongolia’s first world champion SORONZONBOLD Battsetseg (MGL), who won the 59kg crown in 2010, is scheduled to wrestle Friday at 63kg.

Sukhee was ecstatic about winning the gold and told reporters, “Mongolian wrestling and the team are getting better. We are working like a team and we can see the results.”

“I also have to thank (Mongolian wrestling federation president) Asashoryu for all the effort he puts into our women’s program. It has made us better.”

Vorobieva lost to 2013 world bronze medalist Dosho, 6-3, in the semifinals at 69kg and Stadnyk lost on a late penalty point to former European champion Iwona MATKOWSKA (POL) at 48kg.

48kg – Tosaka found the rhythm and range in the second period against Matkowska and scored on a pair of single-leg attacks for a 10-2 victory.

In the bronze medal matches, Stadnyk opened with big double-leg for four points quickly rolled up an 11-0 win over Alina VUC (ROU) in 49 seconds. Asian junior champ KIM Hyon-Gyong (PRK) slipped behind in the closing seconds for a 4-4 win over Alyssa LAMPE (USA) on last-point criteria.

55kg – Hamada countered a single-leg attack by Irina OLOGONOVA (RUS) for two points in the final minute and a 4-3 win to become the first woman other than Saori YOSHIDA (JPN) to win the 55kg world title since 2002. Yoshida will wrestle at 53kg on Thursday.

In the bronze medal finals, Helen MAROULIS (USA) rolled up eight points in the second period for a 10-0 technical fall after struggling in the first against  Katarzyna KRAWCZYK (POL). Irina KHARIV (UKR) dropped Karima SANCHEZ (ESP) twice to her back on her way to an technical fall.

60kg – 2013 junior world champ Sukhee broke open a tight match in the second period with low-level attacks and counter techniques to pound out the 12-3 win over Ratkevich for her first senior-level crown.

In the bronze medal bouts, Natalya GOLTS (RUS) threw a headlock in the first period and had Petra OLLI (FIN) on her back most of the second with counter throws for a 12-1 win.

Last year’s world silver medalist Taybe YUSEIN (BUL) added a bronze to her collection with a single-leg takedown and exposure on her way to a 6-0 victory over European champion Johanna MATTSSON (SWE) for a 6-0 win.

69kg – Focken scored the last points in a seesaw battle with Dosho after the 2013 bronze medalist took the lead with a double-leg only moments before.

Laura SKUJINA (LAT) blocked a takedown attempt by Diana GONZALEZ (MEX), then cranked her over for the fall at 1:25 for one bronze medal and Vorobieva built up an 8-0 lead on four different styles of takedowns before pinning Jenny FRANSSON (SWE) for the other bronze.