CORSIER-SUR-VEVEY (May 28) -- United World Wrestling (UWW) is pleased to announce its collaboration with the United Nations Human Rights Office to support its campaign for the 70th Anniversary of the Universal Declaration of Human Rights.

Born out of two World Wars, the Declaration is just as relevant today as it was on its first day. To highlight what the Declaration means for people in their everyday lives, the UN Human Rights Office launched a yearlong campaign that will culminate on December 10, 2018 - the actual anniversary date of the adoption of the Declaration.

As a partner in the Olympic Movement, United World Wrestling is committed to improving its anti-discrimination efforts, advancing gender equality and promoting fair play within the sport of wrestling.

UWW’s collaboration with the UN Human Rights Office includes a video interview featuring South African wrestler Ms. Madi MPHO as a Human Rights Champion and a joint call from athletes worldwide to support the #standup4humanrights campaign. A “Wrestling for All” open day event will also be organized in South Africa at the end of the year to mark Human Rights Day.

“We have made substantial progress towards gender equality and fair play in wrestling,” said Nenad LALOVIC, President of United World Wrestling and executive board member of the International Olympic Committee. “Our goal of this collaboration is to demonstrate our determination to continue our effort to enhance the contribution of sport to the sustainable development of society.” 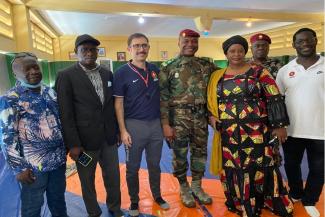 The Guinean Federation of Associated Wrestling Styles benefited from a consolidation course aimed at both coaches and referees. Indeed, in order to develop the Guinean Federation, its President, army captain Soumah Mohamed Souleymane, called on Mr Nenad Lalovic, the President of United World Wrestling, to reinforce the capacities of the technicians and administrators of his organization.

In answer to this request, United World Wrestling, through its Development Department lead by Deqa Niamkey, dispatched two UWW experts to fulfill the mission, including Vincent Aka, Development Officer, and Carlos Garcia, Educator.

As a starter to the beginning of the opening ceremony, the National Olympic Committee of Guinea, whose presence honored the assembly, set the pace by introducing the Guinean Wrestling Federation of Associated Wrestling Styles as the best sports federation in the country. 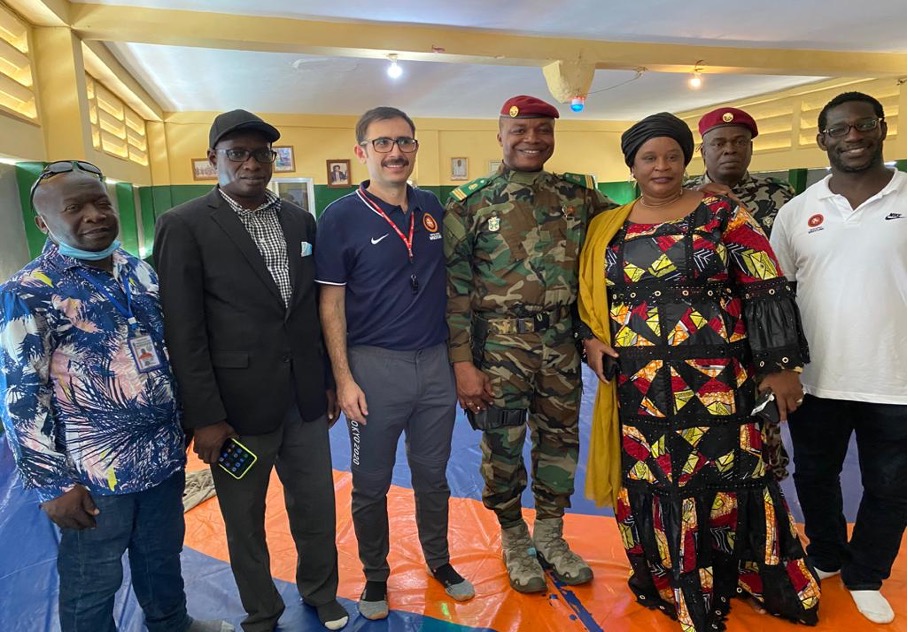 The course took place at the 28 September Stadium in Conakry, from the 30 August to the 5 September. It saw the participation of 36 people, of which 11 were overseers and 25 participating athletes, including seven women. Very interested in understanding training methods and refereeing rules, 23 wrestlers attended all sessions. 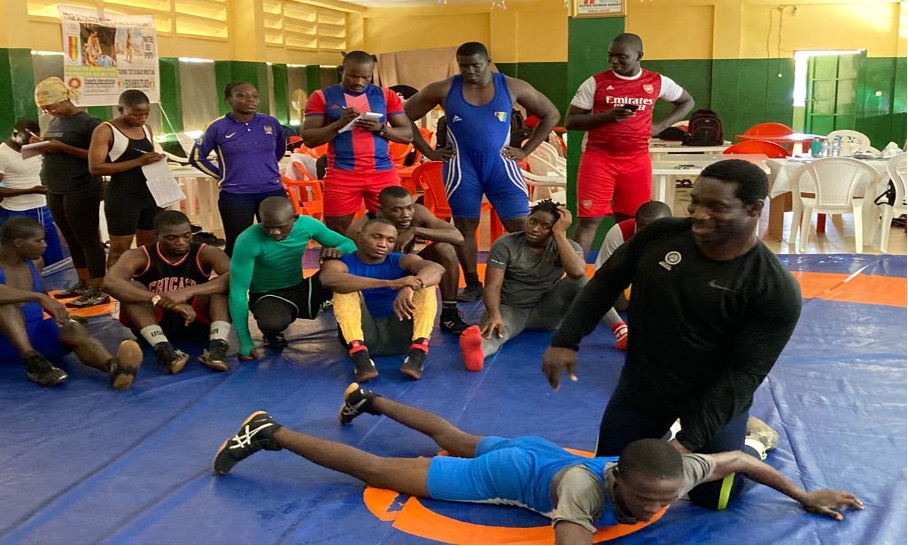 The course’s objective was to equip coaches and referees for both Olympic wrestling and beach wrestling. In addition, skill acquisition in training and refereeing was on the program for, also, both Olympic and beach wrestling, and emphasis was put on how to create one’s club so as to ensure wrestlers the best safety possible. Returning to their homeland, Camara Fatoumata Yarie and Camara Mohamed Ismaël, both high-level athletes and residents at the UWW Africa Center, benefited from this course in the context of their professional transition.

On the left, Camara Fatoumata, the top student of the promotion, with Camara Ismaël.

The main subjects of the course were training pedagogy, safety before, during and after practice, the ethics of a UWW trainer, the trainer’s environment and how does one navigate within. The rules and regulations of Olympic and beach wrestling were put forward and, above all, applied during the pedagogical situations.

Simultaneously, the course offered the possibility to train the Guinean Federation to use the Athena platform and to the follow-up of emails.

The course ended with a beach wrestling competition that allowed all participants to set themselves in a real life situation with regard to all aspects of wrestling ; from coaching to wrestling and refereeing, coaches and athletes were gauged on the field. 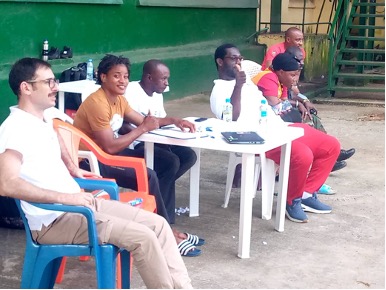 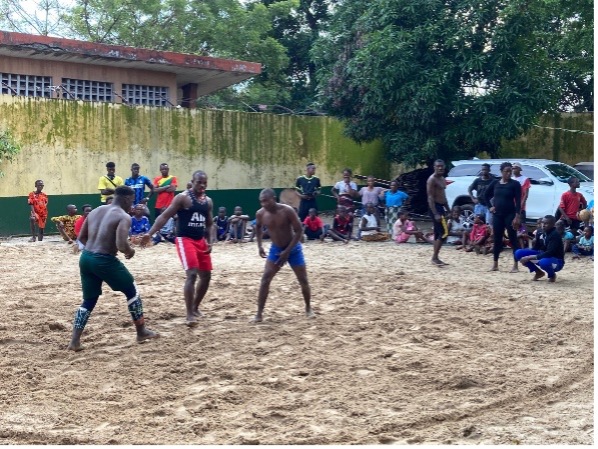 A glance on the attitudes and behaviors during this real life situation was enough to perceive the true potentials at works among the trainers, referees and athletes - and that cram the Guinean Federation of Associated Wrestling styles.

We will be able to fully chaperon the professionalization of this organization by overseeing the creation of its clubs and structures alongside the setting up of a privileged relationship with the National Olympic Committee. One of the main assets of the Federation is the direct link it enjoys with the army, the national police and the local police. The existence of military sport in our country offers a real opportunity to boost the development of wrestling. And the long-term vision that army captain Mohamed Souleymane Soumah singles out shall allow us to prevail. 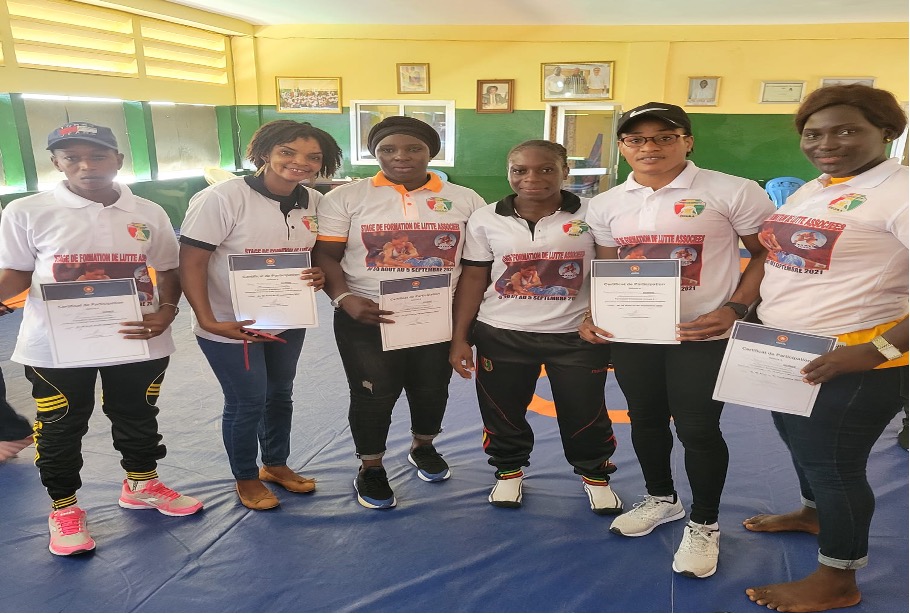 The girls’ collective ready for the take-off of wrestling in Guinea.