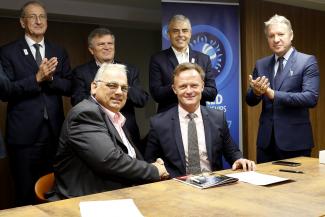 CORSIER-SUR-VEVEY (September 11) -- United World Wrestling president Nenad LALOVIC and International School Sports Federation president Laurent PETRYNKA of France have signed a Memorandum of Understanding (MOU to ensure the growth and control of wrestling through the ISF’s international reach. The signing took place at the 2017 Senior Wrestling World Championships hosted in Paris by the French Wrestling Federation.

“Wrestling is fortunate to have the ISF on board,” said Lalovic. “Their commitment to grow and develop youth sports worldwide will mean that our sport will reach more youths and be taught at the highest level with professional coaches and teachers”

The agreement will see United World Wrestling provide professional assistance in referee education, coaching courses and event management. The ISF will work with their members to increase the availability and quality of wrestling in schools around the world.

The partnership will also aim to create programming that will meet the ISF’s mission to educate through sport, and create meaningful partnerships with a variety of international sport federations. 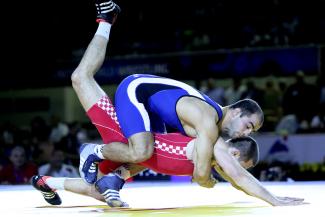 “I wanted to express my gratitude to my peers in the Athletes' Commission for their trust and support during the elections. It’s a great honor for me to become the Chairman of the Commission,” said the London Olympic silver medalist.

Julfalakayan has served as an active member of the Athletes' Commission since ’17 but will now be a voting member of the United World Wrestling Bureau. He replaces ‘12 London Olympic champion and five-time world gold medalist Jordan BURROUGHS (USA), who has served in the role since September 2017.

In addition to sitting on the Bureau as the Athletes’ representative, Julfalakayan will also represent wrestlers/wrestling in the IOC Athletes Forum, WADA and in other organizations.

“I’ll make sure to use all my knowledge, experience and energy to bring the Commission to even a higher level. Of course, that will be possible only with tightest cooperation with all the members of Commission and UWW,”

Julfalakayan’s first responsibility as the Chairman of the Athletes’ Commission will come later this month in Belgrade, Serbia, at the UWW Bureau and Congress meeting.