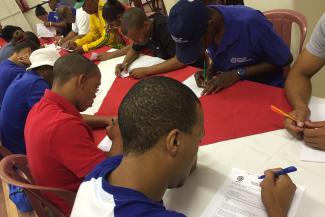 CORSIER-SUR-VEVEY, Switzerland (January 21) -- United World Wrestling, in partnership with the IOC Department of Public Affairs and Social Development through Sport, and the Foundation for Sport, Development and Peace in South Africa, last week launched a pilot program on coaching and Olympic values for the new development initiative, Wrestle Right.

The program also known as the “Coaching Development and Olympic Values Education Program (OVEP) Course," ran from January 10-15 in Franschhoek for the MOD Programme of the Department of Cultural Affairs and Sport -- Western Cape, South Africa.

The mission of the weeklong classroom and on-the-mat exercises was to help South African coaches and teachers understand how to promote Olympic values and to support youth’s physical literacy journey through wrestling.

Wrestle Right was developed with the intent to be delivered to youth around the world. The collaboration between United World Wrestling and the IOC was vital in showcasing the importance of the five OVEP themes (e.g., Respect for Others, Fairplay) and their importance in youth resources.

Local efforts, including the leadership of Dr. Marion Keim Lees at the Foundation for Sport, Development and Peace in South Africa were also essential in helping bring the pilot program to reality. 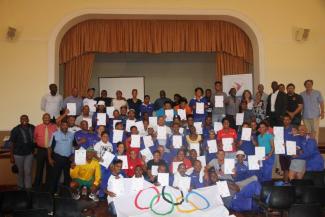 Move+Live+Learn, led by physical education and coaching education expert Dr. Amanda STANEC, developed much of the Wrestle Right curriculum. The resource provides coaches and local decision makers relevant information on: physical literacy, the sport of wrestling, the five OVEP themes, detailed lesson plans and assessments, and information on how to help youth transfer what they learn in the program to their lives outside of the program.

During the pilot program, which included 54 coaches and teachers from districts across the entire Western Cape, South Africa’s Mpho MADI, a bronze medalist at the 2014 Commonwealth Games in Glasgow, inspired attendees by explaining her path to wrestling and sharing her remarkable life story. She was assisted by South Africa’s head wrestling coach, Nico COETZEE, who provided technical leadership on the mats in a way that met the needs of all workshop participants. IOC Facilitator Phelane PHOMANE and United World Wrestling Regional Development Officers Vincent AKA (RDO-Africa) and David LOPEZ (RDO-Americas) also joined Madi for much of the Wrestle Right course, offering their expertise and direction.

Wrestle Right hopes to launch more programs after the Olympic Games in Rio and a review of the program in South Africa.