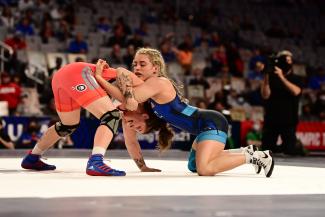 “I’m so blessed that I was able to come back, I honestly didn’t know if there was going to happen,” said Maroulis. “I’m just so grateful they are having the Games still.”

On the men’s side Gable Steveson wowed the audience with a dominating performance at 125kg, defeating two-time world bronze medalist Nick Gwiazdowski in straight matches. Steveson, who did a full back layout after winning, told reporters that he “was coming for the world,” and was prepared to take gold in Tokyo.

In Greco-Roman a number of top seeds held their position, including 2017 world silver medalist Adam Coon who won his spot on Saturday, but will now focus on preparing to qualify the 130kg for the USA squad in Sofia, Bulgaria.

Interviews can be found, here.

The full list of winners for the 2021 US Olympic Team Trials:

FORT WORTH, United States (April 3) – The first day of the United States Olympic Team Trials was filled with on-mat theatrics from young stars, and an off-the-mat drama suitable for a daytime television.

Before the first whistle blew, J’Den Cox – a favorite to win the 97kg weight category -- was deemed ineligible to compete having not weighed-in on time. The two-time world champion and Olympic bronze medalist appealed the decision, but did not compete at the championships

Friday’s action was the first part of the two-day process to select the United States’ Olympic team for Tokyo 2021. Wrestlers who won a medal at an Olympic weight at the Senior Wrestling World Championships in 2019 were granted a pass to Saturday night’s finals where they wait to meet the winner of the challenge tournament (i.e. Adeline Gray, Jordan Burroughs, Tamyrah Mensah-Stock, Kyle Snyder). Additionally, wrestlers in women’s wrestling and Greco-Roman who qualified their weight category in Ottawa were also given a pass to the best-of-three finals (i.e. Helen Maroulis, Joe Rau).

Wrestling will start at 6:30pm CT/7:30pm ET and air on NBCSports.com and NBC Sports app. 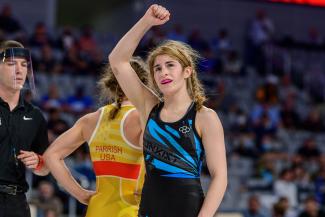 Sarah Hildebrandt, who was runner-up in the 2018 world championships and also qualified the weight in Ottawa last March, will face Victoria Anthony in the best of three finals. Anthony beat her longtime rival Alyssa Lampe, 6-6 via criteria in the semifinals before topping Amy Fearnside in the final. Anthony recently won the 2021 Matteo Pellicone Ranking Series tournament in Rome, beat 2019 world silver medalist Alina Vuc, 10-0 en route to her gold medal finish.

Jenna Burkert hit a beautiful head and arm throw in the challenge tournament finals to pin two-time world silver medalist Ali Ragan and punch her ticket to the finals. Burkert will face world and Olympic champion Helen Maroulis in the best of three finals.

Kayla Miracle, a U23 world silver medalist, qualified the weight category for the United States in Ottawa, and will face four-time world age group medalist Macey Kilty in the finals.

Defending world champion Tamyrah Mensah-Stock will look to make her first Olympic team on Saturday, but to do so will have to beat the most impressive young wrestler in the United States. Kennedy Blades, who is only 17 years old, rolled through Friday’s challenge tournament, earning an 11-1 technical fall against two-time world team member Forrest Molinari in the challenge tournament finals. 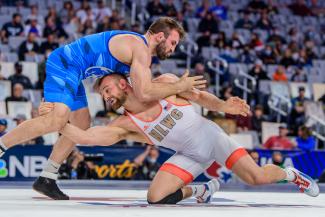 Thomas Gilman, who took silver at the 2017 world championships at 57kg, is looking to make his first Olympic team. Vito Arajau

Jordan Oliver upset three-time age group world champion Yianni Diakomihalis in the semifinals, 4-4 via criteria. The victory put Oliver into the Saturday night finals against Joey McKenna who upset 2019 world team member Zain Retherford in Friday’s other semifinal. The United States has yet to qualify the weight category for the Tokyo Olympic Games and will be sending Saturday night’s winner to the Last Chance Qualifier in Sofia, Bulgaria.

David Taylor and Bo Nickal will clash Saturday night after the duo made their respective ways through the challenge tournament. Nickal is a U23 world champion and was runner-up to J’Den Cox at 92kg in 2019. A 2018 senior-level world champion, Taylor is looking to make his first Olympic team. The pair have been in the same club for several years.

World and Olympic champion Kyle Snyder had expected to meet J’Den Cox, but will instead face former teammate Kollin Moore, who won four matches on Friday to make the Saturday finals. Should Snyder prevail he’ll be looking to repeat his Olympic gold medal performance from 2016, but will need to go through Abdulrashid Sadualev of Russia to once again climb to the top of the Olympic podium. 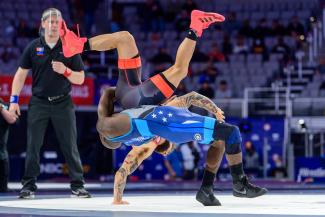 A longtime member of Team USA, Ryan Mango will face newcomer ldar Hafizov in the Saturday finals. Both are looking to make their first Olympic team.

Alejandro Sancho qualified the weight in Ottawa and sat out the challenge tournament. He will face two-time world bronze medalist and 2016 Olympic team member Ellis Coleman in the best -of-three finals.

This will be both wrestlers first attempt at making a world or Olympic team. The winner will also be tasked with qualifying the weight at the Last Chance Tournament in Bulgaria.

Two-time world team member Joe Rau qualified the weight in Ottawa and will face John Stefanowicz in the best of three finals. Neither wrestler has made an Olympic team.