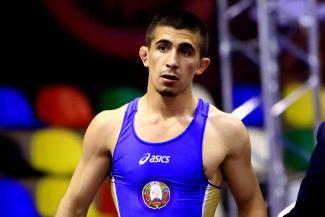 Dede will try to improve on his silver medal won in Katowice, Poland and will be joined by teammates Enes USLU (66kg), a 2013 European cadet bronze medal winner, and Mustafa SESSIZ (84kg).

Turkish wrestling fans were not satisfied, however, and left the arena mumbling about the one that got away in the morning session.

He then appeared to pin last year’s bronze medal winner Salim NAIM MIKYAY (BUL) in the quarterfinals but Naim Mikyay squirmed out of the hold, touching off a firestorm of protests from the irate fans.  The Bulgarian prevailed, 15-10, to advance to the final while Pismisoglu is left to wrestle for a bronze medal. 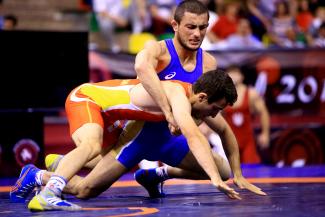 Meanwhile, Russia, which won all four gold medals the previous evening, stumbled on the second day of competition at Bagcilar Sports Complex and placed “only” two into the championship bouts.

Ibragim ILYASOV (55kg), winner of the prestigious Ziolkowski tourney in Poland last summer, advanced to the final by winning four bouts all inside of three minutes and will face Naim Mikyay for the gold medal. Copa Brazil winner Gadzhi RADZHABOV (84kg) squares off with Sessiz.

In the final bout of the championships’ freestyle competition, Dede will face Said GAMIDOV (AZE), who finished in fifth place last year at 96kg and tripped up Zelimkhan KHIZRIEV (RUS) in the semifinals for the fall. 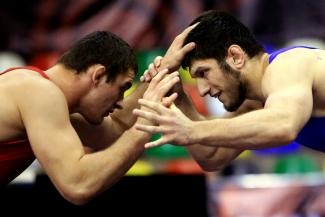