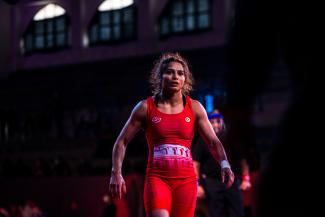 HAMMAMET, Tunisia (April 3) --- For the second time in as many days, the host nation of the African and Oceania Olympic Qualifier earned four Olympic berths. On Saturday, Rio Olympic bronze medalist Marwa AMRI (TUN) assisted her country in winning three gold medals and a silver and grabbed the team title 45 points ahead of second-place Nigeria, who earned three women’s wrestling Olympic berths on the day.

Bouseta’s gold came in the traditional 57kg bracket, while Hamdi and Amri won Nordic style bracket gold medals. The two-time African medalist breezed to the semifinal and final wins over Eman EBRAHIM (EGY) and Fatoumata Yarie CAMARA (GUI). In the semifinals, Bouseta controlled the match whistle-to-whistle with a two-on-one, scored two takedowns, two exposures and a reversal, and cruised to a 9-2 victory over the Egyptian. Then, in the finals, the long and lengthy Tunisian capitalized on her Guinean opponent’s mistakes with eight counter-offensive points and eased her way to a 57kg gold with a 9-3 victory.

Hamdi and Adijat IDRIS (NGR) came into their fourth-round matches with 3-0 records, but the Tunisian took the 50kg gold with a narrow 2-1 victory.

Amri, the most decorated African women’s wrestler ever, punched her fourth ticket to the Olympic Games with three wins on the day. She’ll now head to Tokyo looking to improve on her bronze-medal finish from the Rio Olympic Games.

Coming into the weekend, ’19 world bronze medalist Odunayo ADEKUOROYE (NGR) was the lone Nigerian woman to qualify her nation for the Olympic Games. But Nigeria will have at least four women competiting in Tokyo after Blessing OBORUDUDU’s (NGR) 68kg gold medal and silver-medal finishes from Idris and Aminat ADENIYI (NGR) at 50kg and 62kg, respectively.

Despite falling to Essombe Tiako in the gold-medal match, Aquino scored five first-period takedowns against Siwar LOUATI BEN ALI (TUN) in their semifinal meeting and booked Guam a ticket to the Olympic Games at 53kg. She joined Maria DUNN (GUA) as the only women’s wrestlers from Guam to ever earn an Olympic berth.

The final pair of women's wrestling Olympic berths went to Egpytian wrestlers Enas AHMED (EGY) and Samar HAMZA (EGY). Hamza, who competed at the Rio Olympics, won gold at 76kg with a pair of wins, and Ahmed finished in second place at 68kg after falling to eventual champion Oborududu in the opening round.

The final day of wrestling at the African and Oceania Olympic Qualifier starts on Sunday morning at 11:00 am (local time). Follow all the action live on www.uww.org.