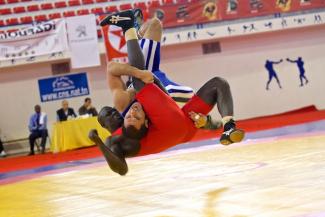 TUNIS, Tunisia (March 30) – Host-country Tunisia walked away from the Palais De Sport in El Menzah, Tunis on Sunday with team titles in both Greco-Roman and men’s freestyle.

The Tunisian Greco-Roman team was once again lead by seven-time African champion Zied ZYETOKRAM (TUN), who used powerful slams and commanding mat presence to ward off all challengers en route to his title at 75kg. Zyetokram was joined on the top of the podium by 85kg wrestler and defending African champion Haykel ACHOURI (TUN) and longtime upper weight competitor Radhouen CHEBI who won the title at 130kg.

Tunisia took the team by 15 points, beating out second-place Morocco – who had no individual champions – 73 to 58.

The home country’s freestyle team had a tougher time separating themselves from a crowded field of talent, though they finally edged second place Egypt by 14 points and third-place Nigeria by 17.

Leading the freestyle team was 125kg champion Slim TRABELSI, who looked brilliant in the final match of the tournament earning a 10-0 technical fall over Ahmed OTHMAN (EGY).

Second-place Egypt had two first-place finished where Ayed IBRAHIM at 70kg and Mohamed ZHOGLOL at 86kg had dominating finals performances.

Nigeria Off to Fast Start Under New President Daniel Igali

Nigerian wrestling federation president Daniel Igali had plenty to smile about Sunday night in Tunis with his men’s and women’s freestyle squads both finishing in the top three of their division.

“We had a three week training camp before the championships,” said Igali, who is a parliamentary representative in his home state of Bayalsa where the wrestlers also train. “I paid for the men to stay at a hotel and the women stayed in my home. I think that they were able to train the proper way and the results are showing in their wrestling.”

The Nigerian women got the momentum started on Saturday night edging out host Tunisia by six team points to take the title, 67-61. The Nigerian squad had back-to-back champions with Amimat ADEMIYI (NGR) and Blessing OBORUDUDU (NGR) earning titles at 60kg and 63kg respectively. The team also had runner-up performances from O. ADEKUROYE (NGR) at 53kg and Makanjuola BISOLA at 55kg.

On Sunday the men won titles at 57kg with Welson EBIKEWENIMO (NGR) earning three-straight technical falls, and at 97kg where Sosu TAMARAU earned two technical falls of his own.

“We did a good job, but we need to get better. The overall goal is not to win an African title or to do well at the Commonwealth Games. Our goal is to have world and Olympic medalists,” said Igali.

“For that we have a lot of work and like everyone we could use more funding to help us get there.”

Though the Tunisian women were unable to repeat their 2013 title performance at home, they did get another impressive performance from World No. 6 Marwa AMRI (TUN) who steamrolled all three of her opponents Saturday to earn her second straight title at 55kg. Last month the 25-year-old Tunis resident won gold at the Klippan Women’s Open in Sweden. That title earned her several hundred dollars in prize money from a very pleased Tunisian Wrestling Federation.

“I was happy with my performance and so were my coaches,” said a shy Amri. “I am wrestling well right now and I hope that my hard work pays off with a world medal.” Next up for the 25-year-old Tunisian star is the Grand Prix of Spain, which she says she hopes will give her the momentum to go to the World Championships in Tashkent in September and earn her first world medal.

Tunisia also had gold medal days from at Marwa MIZIENI (TUN) at 48kg, and Hela REIBI (TUN) at 58kg.

Other standout performances in women belonged to Egyptian veteran E. MOSTAFA (EGY) at 69kg who used two falls to advance herself into top position in her Nordique bracket. Laure ALI ANABEL (CMR) used a headlock in the finals at 75kg to push past Sierra Leone’s Kamara HAJARATU and take home her second consecutive African Championship.

Bulgarian Nikolai Minchev was moved to tears on Sunday night in Tunis. The 64-year-old head coach of the FILA Center Africa, located in Thies, Senegal beemed with pride as one wrestler after another from his program made their way to the podium.

In all more than a half-dozen competitors from the FILA Center placed at the tournament and most are expected to travel this summer to the Grand Prix of Spain.