Trio of Nations Send Pair of Cadets to European Finals 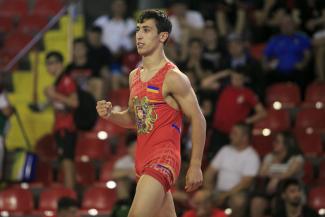 SKOPJE, Macedonia (May 14) - The 2018 Cadet European Championships kicked off today with seven different nations, including the host Macedonia claiming at least one spot in Tuesday nights freestyle finals. Armenia, Russia, and Turkey led the way on the first day of competition, each placing a pair of wrestlers in the finals.

Besir ALILI (MKD) came into the semifinals as the only Macedonian vying for a spot in the finals. Alili gave the host nation their first finalist of these championships after stopping Stanislau MAZOK (BLR), 11-1 in the 45kg semifinals.

He'll wrestle Rafayel HARUTYUNYAN (ARM), who also picked up a technical superiority victory to seal his spot in the finals.

While three nations had a pair of wrestlers make the finals, those nations will only have wrestlers meet in one of the five final bouts.

In the semifinals, Armenia’s Manvel Khndzrtsyan stayed defensively sound in the second period to hold off Russia’s Samvel TERZIAN (RUS), 3-2.

Khndzrtsyan will wrestle Adem Uzun, who made his way to the finals by dominating Aleksandrs MOROZOVS (LAT), 10-0.