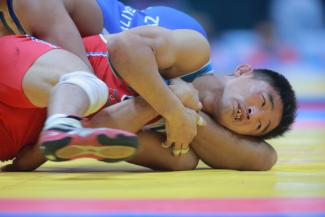 JONG Hak-Jin (PRK) and YANG Kyong-Il (PRK) finished the 2013-2014 season ranked first and second in the world respectively after Jong collected the world championship in Tashkent and Yang triumphed a the Asian Games two weeks later.

While backup wrestlers don’t normally rise to the top ten in postseason rankings, in 2014 the wrestlers from DPR-Korea Jong was the established starter and was asked to wrestle in the Asian Games – a regional tournament of enormous significance to governments looking for bragging rights. Competitors are often receive steep financial incentivizes to win medals at the championships.

Jong who didn’t place at the Asian Championships in April but won the Takhti Cup in February, had an impressive run at the Asian Games after securing the starting spot. The 28-year-old wrestler defeated ranked wrestlers on his way to gold Rasul KALIEV (KAZ), BATBOLD Nomin (MGL) and Fumitaka MORISHITA (JPN).

Yang, who didn’t travel much in 2014 won the world title with back-to-back wins over 2013 world champion Hassan RAHIMI (IRI) and 2012 Olympic silver medalist Vladimer KHINCHEGASHVILI (GEO) at the world championship in Tashkent.

For DPR-Korea capping their season with a world championship and Asian Games title meant making history as the first wrestlers from the same country to finish 1-2 in the world rankings.