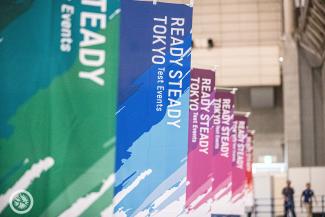 CHIBA, Japan (Oct. 3)---The wrestling venue for the Tokyo 2020 Olympics got its first taste of action with the start of a three-day women’s tournament, with the competition on the mat overshadowing the kind of technological glitches that often pop up in a test event.

Yui SAKANO (JPN) provided the surprise of the day in Hall 5 of Makuhari Messe, a sprawling convention center in western Chiba city down the coast from Tokyo, when she avenged a loss from three years ago to newly minted world bronze medalist PEI Xingru (CHN) in the 62kg semifinals.

Venue manager Yasukazu FUJIMORI, assessing the first day of the three-day test event in the six Olympic weight classes for women, said, “The training for the staff and volunteers went well. The problem was with the technology.”

He pointed out bugs with the printer and scoreboards, the type that come out during operational trials and are fixable as the UWW and Olympic systems are integrated.

Of bigger concern for Fujimori was the low number of wrestlers drawn to the tournament. Coming so close to the recently completed World Championships in Kazakhstan, only half the countries who had expressed interest in participating actually made the trip.

“It’s a bit of a lonely tournament,” Fujimori said. “We wanted 16 entries [per weight class] but only have eight [or nine],” adding that reductions in the budget by the Tokyo 2020 Organizing Committee for its “Ready Steady Tokyo” series of test events also was a factor.

Fujimori expressed his gratitude to China, which, among the six nations here, sent several top wrestlers, including five medalists from Nur-Sultan.

“I wanted to get a feel for the atmosphere of this venue and the weather in Japan,” ZHOU Qian (CHN), a two-time former world medalist, said after making the 76kg final. “Maybe there will be some difference [next year], but it will help a lot to prepare next time.”

When the wrestlers got on the mat, of course, they put aside the external factors and focus on the task at hand, just as they would for any tournament.

Sakano, the 2017 world U23 champion at 60kg, was only offered a place at the tournament 10 days ago. And when she saw who was among her competition at 62kg, she became extra motivated.

Three years ago at the World Championships for non-Olympic weights, Sakano lost 8-6 in the semifinals to China’s Pei, who went on to win that title. Pei would add bronze medals at 59kg last year in Budapest and last month at Nur-Sultan.

On Thursday, Pei scored a go-behind takedown to take a 2-0 lead into the second period. But Sakano used a nifty barrel roll to go ahead 4-2 and came very close to ending the match with a fall.

“I wanted to use a different move, but the chance came up,” Sakano said. “I was losing anyway so I just went for it.”

Pei escaped the predicament, but could only gain a point for fleeing in the closing seconds and came out on the short end of a 4-3 score.

“I remember it,” Sakano said of the 2016 loss to Pei. “When I saw the draw, I thought this was a good chance for revenge as I hadn’t faced her in the three years [since the world championships].”

In the final on Saturday, Sakano will be looking for another measure of revenge. She will be facing 2018 world junior champion Atena KODAMA (JPN), who defeated her at last year’s All-Japan Championships.

Kodama advanced with a 5-3 victory over Ilona PROKOPEVNIUK (UKR) after scoring all of her points in the second period, mainly with a deadly low single.

In the morning session, Sakano scored a victory by fall over LUO Xiaojuan, this year’s Asian champion at 65kg. Pei, meanwhile, had her hands full with Mallory VELTE (USA) in a clash of current and former world bronze medalists before coming away with a 4-1 victory.

Kodama, a 2018 world junior champion, defeated Yarygin Grand Prix runner-up Anna SHCHERBAKOVA (RUS) 8-1, twice fighting off whizzer attempts that ended up with the Russian on her back.

The 76kg final will be an all-China affair between Paliha PALIHA (CHN) and Zhou, who each advanced with very different wins.

Asked what she was thinking as the clock ticked down, Zhou smiled and said in English, “I want to win.”

At 68kg, WANG Xiaoqian (CHN) stormed into the final with the most dominant performance of the day, and will face Naruha MATSUYUKI (JPN) for the gold.

Matsuyuki, one of twin sisters in the tournament, pancaked Alena STARODUBTSEVA (RUS) for two points early in their semifinal before holding on for a 3-0 win. 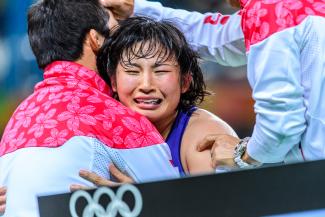 Building on February’s publication, the new Playbooks provide more specific details to participants about the countermeasures that will help ensure safe and successful Games for all those taking part and the residents of Tokyo and Japan. Some of the key measures in the Playbooks can be found in the five-party joint statement.

The countermeasures detailed in the Playbooks are based on science, benefiting from learnings gathered during the evolution of the COVID-19 pandemic. In addition to implementing the most effective tools being used throughout society, such as screening testing, mask wearing, personal hygiene and physical distancing, they also draw upon the experience of hundreds of sports events that have taken place safely across the world over the past year, with minimal risk to participants and the local population.

The Playbooks have been developed through the ongoing work of the All-Partners Task Force, which includes the Government of Japan, the Tokyo Metropolitan Government, the Tokyo 2020 Organising Committee, the IOC, IPC, World Health Organization and independent experts and organisations from across the world.

Speaking about the Playbooks, IOC President Thomas Bach said: “Tokyo and Japan have accepted the unprecedented challenge of organising the first postponed Olympic and Paralympic Games in history. We thank them for their great work in this respect and, as partners, we understand the great responsibility that everyone attending the Games must accept so that all participants and the Japanese population remain safe. This is why we have created the Playbooks, based on science and the best medical and event expertise available to us.”

He continued: “Providing more details about the operations that stakeholders can expect at Games time, we have also remained flexible to the evolving global situation, combining numerous countermeasures to create the safest possible environment. Increased testing for athletes and stakeholders, before and during the Games, is one important example. We’re also encouraged by the growing number of vaccinations being administered throughout the world. These tools will only work, however, if everyone shows solidarity and follows the guidelines. This is why those violating the rules can expect to be strictly dealt with in Tokyo. This is our commitment to the people of Tokyo and Japan, who are so kindly welcoming us to their city and country this summer.”

IPC President Andrew Parsons said: “With the support of the world’s leading experts in health and sport event delivery, the updated Playbooks offer greater information for everyone attending the Tokyo 2020 Games, outlining the roles and responsibilities of each stakeholder.

“As with the first editions, special considerations for persons with disabilities are included in all Playbooks, and I believe the stringent measures outlined will offer reassurance and comfort to all Games stakeholders, as well as the people of Japan. We are taking every possible measure to deliver safe Games.”

Tokyo 2020 President Hashimoto Seiko said: “The COVID-19 countermeasures included in the first edition of the Playbooks [published February 2021] have been reviewed and significantly updated in order to address the evolving situation of the pandemic. Rules to be observed by all Games participants during their stay in Japan have been expanded and clarified to include further details to ensure safe and secure Games.

“It is important that all stakeholders fully understand these rules, and that each and every one arrives in Japan with the understanding that their cooperation is critical to the success of the Games. We will hold online briefings for each of our stakeholder groups to ensure clear and comprehensive communication on these points.”

One of the key updates in this version of the Playbooks details daily testing, in principle, for athletes and those in regular contact with them, which will be a crucial part of minimising transmission and the risk of an uncontrolled outbreak. Testing will be used for general screening and for those identified as a close contact of a positive case; as well as for diagnosis for those experiencing symptoms of COVID-19.

The latest Playbooks also outline the role of COVID-19 Liaison Officers (CLOs), to be appointed by each stakeholder, who will work very closely with Tokyo 2020 and Japanese health authorities. They will receive extensive training to enable them to play a key role throughout the Games, providing an essential support network for their delegation. The CLOs will ensure all members of their organisation are fully informed of the contents of their relevant Playbooks. In addition, they will be monitoring the implementation of all COVID-19 countermeasures, ensuring participants follow their detailed activity plans and managing any positive cases that are detected.

The publication of version two of the Playbooks builds upon the optimisation and simplification of operational plans, reduced delegations from all Olympic and Paralympic Movement stakeholders, and the decision and announcement in March by the Japanese side, and respected and accepted by the IOC and IPC, to not allow spectators from overseas to enter Japan.

In acknowledging the evolving COVID-19 situation around the world, the IOC, IPC and Tokyo 2020 reinforced their commitment to regularly update the Playbooks. They will continue to receive regular input from the All-Partners Task Force, taking into account the latest advances in science and developments on the ground, in close collaboration with experts. As part of this ongoing evolution, the next version of the Playbooks (which is expected to be final) will be published in June 2021.