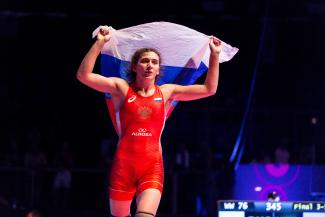 ROME, Italy (August 2) - Russia’s Greco-Roman squad won four gold medals on their way to a team title, and Russian women picked up where their Greco-Roman countrymen left off, dominating the European Junior women’s wrestling competition to the tune of three gold medals.

Gurskaya, who last won a European title in 2013 launched the Russian gold medal parade, defeating Aynur ERGE (TUR), 8-6 in the unpredictable back and forth 55kg gold medal bout.

Though Gurskaya was the aggressor the entire match, she continued to allow Erge to stay in the match by turning defense into offense.

The three-time age-level world bronze medalist used a fireman’s carry and gut wrench in the opening period to command the 6-2 lead heading into the break.

But it was Erge, Turkey’s four-time European representative who remained patient and tied the match with two minutes remaining, scoring a four-point head-lock as Gurskaya pushed the pace on the out of bounds line.

With 90 seconds left, Gurskaya shot a double-leg and grabbed the match-deciding takedown, ultimately winning the bout, 8-6.

Russia (100 points) leads Turkey (74 points) by 26 points heading into the final day of women’s wrestling, but Russia still has two finalists, while Turkey only has one. 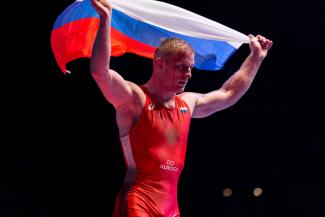 Akhmed SHOKUMOV (RUS) won one of Russia's two gold medals on the final day of wreslting at the Junior European Championships. (Photo by Max Rose-Fyne)

Akhmed Shokumov was manhandling Dzhemal Rushen ALI (BUL) in the 74kg title match before picking up the second-period fall.

Shokumov grabbed a pair of opening period takedowns, shutting out Ali while controlling the 4-0 lead after the first three minutes.

In the second period, a deflated Ali got to his offense and spun behind Shokumov, but was unable to get the Russian’s knee to touch, and the wrestlers were brought back up to their feet.

Shortly after, the frustrated Ali looked for a homerun throw, but Shokumov pancaked him to his back and scored the fall, picking up Russia’s third freestyle title and their twelfth overall Junior European Championship gold medal.

Zakuev blazed out to an eight-point lead in the opening period, transitioning to a pair of gut wrenches from two separate takedowns.

The Russian capped off his title run with a second period cross-ankle-pick, giving him the ten-point advantage and back-to-back junior continental championships.

Russia wasn’t the only nation busy winning a pair of gold medals on the seventh and final day competition , as Armenia’s Vazgen TEVANYAN (ARM) and Hovhannes MAGHAKYAN (ARM) were also crowned European champions.

The opening period was filled with underhooks and fake shots, but Tevanyan was able to score the periods only point with a step-out that gave him the 1-0 lead into the break.

Tevanyan added another step-out to open the second period but fell behind 2-2 on criteria after forfeiting a deep two-point double leg.

The Armenian wrestler regained the lead with 90 seconds left, scoring his third step-out point of the match. He closed out the bout by stopping Valizada's throw attempt, scoring his first offensive points of the bout and winning his first European title since claiming the gold back in 2016.

In the 125kg gold medal bout, Hovhannes used a left-side underhook to slow down Yurii IDZINSKYI (UKR) and won the bout, 4-2.

Maghaky gave up an early takedown and trailed 2-0 right out of the gate. The two-time age-level runner-up rebounded before the period ended and threw the Ukranian wrestler with a monstrous four-point throw, taking the 4-2 lead into the final three minutes.

After a scoreless second period, the match ended 4-2 and Armenia, who finished one point behind Azerbaijan walked away with the third place team trophy.