From Teens to 40-Somethings: The Youngest and Oldest Gold Medalists in Olympic History (Part I: Freestyle) 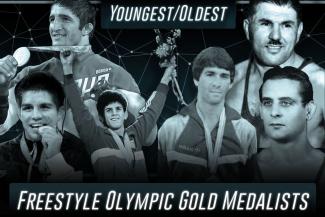 (This is the first of a three-part series that appeared on the Japan Wrestling Federation website. It was translated for UWW by Ken Marantz.)

With wrestling currently on hold along with the rest of world sports and looking for a distraction, I started to wonder about the Tokyo Olympics, which have been postponed for a year. Would that have any affect on the records for youngest- and oldest-ever Olympic champions in history each of the three styles?

What put that subject into my head was a story I had read on an American media website. In the report, it speculated that the Tokyo Games might produce the oldest gold medalist in Olympic wrestling history. But what struck me most was that the information cited didn't sound right to me. The ages seemed off.

So, with perhaps a bit too much time on my hands, I set out to confirm my suspicions and researched the ages of every Olympic wrestling gold medalist in history. The results were quite fascinating, and enabled me to come up with top 15 lists for both ends of the age spectrum in all three styles. Today I will start with freestyle.

First-Ever Teen Grabs a Gold
There have been 198 gold medals awarded in freestyle wrestling in Olympic history since wrestling first appeared at the 1904 St. Louis Olympics. The champions have been mostly in their 20s, with a fair number in their 30s. But there has been the rare teenager, and the even rarer 40-something to make it to the top step of the podium.

The youngest in history in freestyle has been Saban TRSTENA (YUG), who may have competed for a country that no longer exists but left his name in the record books when he won the 52kg gold at the 1984 Los Angeles Olympics at the tender age of 19 years 7 months 9 days.

Trstena had gone into the Los Angeles Games riding high from a victory in the final of that year's European Championships over reigning world champion Valentin JORDANOV (BUL), who has his own place in wrestling history (more on that later).  Trstena's triumph in L.A. made him the first teenager in Olympic history in either style to win a gold.

En route to the gold, Trstena knocked off Yuji TAKADA (JPN), the 1976 gold medalist who was unable to defend his title at the 1980 Moscow Olympics because of the U.S.-led boycott. Takada, a four-time world champion, is now executive director of the Japan Wrestling Federation. Trstena's connection with Japan, however, was not finished--at the Seoul Olympics four years later, he would lose in the final to Mitsuru SATO (JPN).

One one other teenager has ever won an Olympic crown. Togrul ASGAROV (AZE) was a little more than one month shy of his 20th birthday when he captured the 60kg gold at the 2012 London Olympics. While young, he was not unknown going into London, having won the world junior gold the previous year and the European senior title five months before the Olympics. In the third round in London, he eked out a 2-0 (1-0, 2-2) win over 2008 silver medalist Kenichi YUMOTO (JPN).

Four years later, Asgarov was denied a second straight gold at the 2016 Rio Games when he lost in the 65kg final to Soslan RAMONOV (RUS). After falling out of the spotlight following that defeat, local media has reported he will aim to qualify for Tokyo at 74kg.

Looking at the other end of the timeline, it had been reported that Jordanov became the oldest freestyle champion in Olympic history when he won the 52kg gold at the 1996 Atlanta Olympics at a spry 36 years 6 months 7 days. But this was a mistake. On the day Arsen MEKOKISHVILI (URS) won the over-87kg gold at the 1952 Helsinki Olympics, the Soviet wrestler was 40 years 3 months 11 days. In fact, Jordanov is third on the all-time list.

It is worth noting that the rules have changed regarding weigh-ins, which could affect the performance of older wrestlers. Having just a single weigh-in, on the first day of competition, might be to a veteran's advantage, as they might have more trouble with weight control.

At Olympics that had weigh-ins over a span of two or more days, Sergei BELOGLAZOV (URS) takes the honor as oldest-ever champion by winning the 57kg gold at the 1988 Seoul Olympics 14 days after his 32nd birthday. Limiting it further to Games which had multiple weigh-ins on the mornings of competition days, Mirian ZALKALAMANIDZE (URS) was the oldest, having been 29 years 7 months 8 days at the time of his victory at 52kg at the 1956 Melbourne Olympics.

As world wrestling has recently returned to the latter system, it will make a gold-medal performance by a 30-something wrestler even more noteworthy. One candidate might be Yowlys BONNE RODRIGUEZ (CUB), who won the 2018 world title in Budapest at 61kg at the age of 34 years 11 months 9 days, although it is not certain he will be on the team to Tokyo.

Looking at the Top 15 lists, one wrestler makes both. Bouvaisa SAITIEV (RUS) occupies the No. 13 spot among youngest-ever with his 1996 Atlanta gold, and ranks 11th among the oldest in history after striking gold again 12 years later in Beijing.

*--There are discrepancies in the birthdate of Yasar Dogu. The date used here is conjecture from various sources. 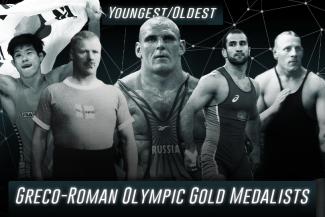 (This is the last of a three-part series that appeared on the Japan Wrestling Federation website. It was translated for UWW by Ken Marantz.)

A Style Dominated by Europeans
Compared with the United States and Asia, where most wrestlers start the sport in freestyle, many in Europe start out in the sport as youth in Greco-Roman style. This can account for the fact that out of 196 gold medals awarded at the Olympics so far, 168 have gone to Europeans (170 if wrestlers from current Asian countries who competed for the Soviet Union are included).

Even so, it took more than a century of Olympics before a teenager would bring home a gold. Islambek ALBIEV (RUS) broke through the barrier at the 2008 Beijing Olympics, where he won the 60kg gold at 19 years 7 months 15 days. A world junior champion in 2006, Albiev added to his stature when he triumphed at both the European and World Championships the year after Beijing.

Albiev remains the lone teenager to win a Greco gold heading into the Tokyo Olympics, although such a feat might have more to do with timing than skill, given that the Olympics come only once every four years. A wrestler who is 16 or 17 in an Olympic year will likely never get a legitimate shot at a gold as a teenager (not that it really matters in the end if one wins a gold at 19 or 20; it is just being mentioned here for historical purposes).

Take the case of legendary Hamza YERLIKAYA (TUR), who was just 17 years 3 months 16 days when he won the 82kg title at the 1993 World Championships. But his triumph at the 1996 Atlanta Olympics came 1 month 18 days after he had celebrated his 20th birthday. Yerlikaya would add another Olympic title in 2000 and world title in 2005 before going on to become a member of Turkey's Parliament.

The 1987 World Championships in Clermand-Ferrand produced a teenaged Greco champ in Pedro Favier ROQUE (CUB), who won the 52kg gold at 18 years 8 months 26 days. He would have still been 19 at the Seoul Olympics the following year, but it was not to be. Cuba, following the lead of the Democratic People's Republic of Korea, did not participate in the Games in the south of the peninsula.

Comparatively, freestyle has eight Olympic champions who were in their teens or 20, while Greco has just half that number with four. Perhaps this shows how Greco relies more on experience to master.

It looking at the oldest gold medalists, the world and Japanese media heralded the crowning of a 40-year-old champion at the 1972 Munich Olympics. Anatoli ROSCHTSCHIN (URS) was 40 years 6 months 0 days when he won the over-100kg crown. But there had been an older champion before that, back in the days before mass media. At the 1920 Antwerp Olympics, Adolf LINDFORS (FIN) was 41 years 6 months 12 days when he triumphed in the over-84kg class. And he certainly earned his medal--he won all five of his matches by fall, with his second-round victory take 23 minutes 43 seconds and his win in the final lasting a whopping 47 minutes 38 seconds. (In that era, the time limit for a match was reportedly 50 minutes.)

As in freestyle, the majority of champions on the oldest-ever list are in the upper weight classes. Of the top 15, the lone lightweight champions (68kg or lower) came in the pre-World War II era. Since the end of the war, there have been only six gold medalists aged 30 or over in the lightweight divisions, most recently Davor STEFANEK (SRB), who was 30 years 11 months 4 days when he won the 66kg gold at the 2016 Rio de Janeiro Olympics.

By the way, Japan has had four Greco champions in Olympic history. The youngest was Masamitsu ICHIGUCHI (JPN), who was 24 years 9 months 7 years when he took the 57kg gold at the 1964 Tokyo Olympics. The oldest, 1984 Los Angeles Olympic 52kg champion Atsuji MIYAHARA (JPN), was 25 years 7 months 13 days on the day of his triumph.

Why am I bringing this up? If the upcoming Tokyo Olympics had been held as scheduled this summer, current world 60kg champion Kenichiro FUMITA (JPN) could have broken Ichiguchi's record as youngest-ever by winning the gold on Aug. 3, when he will be 24 years 7 months 16 days. But with the Games postponed for year, Fumita instead has a chance to become the oldest-ever. The final is tentatively slated for Aug. 2, 2021, when Fumita will be 25 years 7 months 15 days--just two days older than Miyahara.