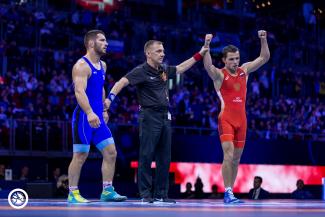 The 25-year-old Russian scored his first two points off passivity calls -- one in each period -- before executing a side lift throw for points in the second period. A failed challenge would give Surkov his seventh point for a 7-0 shutout victory over Stefanek.

Surkov was one of two gold medalists for Russia on Saturday. The other Russian to win gold in Greco-Roman on Saturday was Sergey EMELIN (RUS) at 60kg.

Emelin, like Surkov, was dominant in the finals. He used two four point moves on his way to a 10-1 technical fall over Victor CIOBANU (MDA) in the gold-medal match at 60kg.

The Russian threw Ciobanu for four points just 15 seconds into the match to grab an early 4-0 lead. In the second period, after the Moldovan scored with a step out, Emelin used a pinch headlock to score four more points. He then ended the match with a gut wrench.

Emelin was unchallenged throughout the competition, outscoring his opposition 44-1 in five matches.

All three points scored in the 87kg gold-medal match came from passivity calls. Beleniuk scored the first point and led 1-0 at the break. But Basar controlled the action in the final period, scoring two passivity points to take the victory.

Meiirzhan SHERMAKHANBET (KAZ) showcased a strong par terre game as he cruised to a 9-0 technical fall in the first bronze-medal match at 67kg. Gevorg SAHAKYAN (POL) blanked Danijel JANECIC (CRO) 7-0 for the other bronze medal at 67kg.

Russia leads in the Greco-Roman team standings with 103 points, while Turkey sits in second place with 75 points. Azerbaijan (54), Hungary (53) and Armenia (46) round out the top five teams. 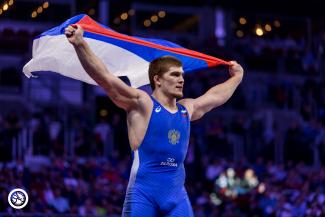