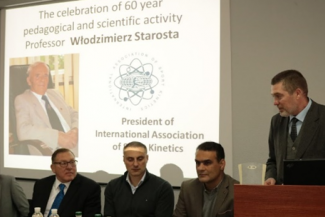 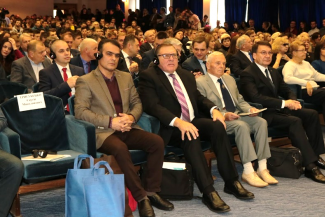 Starosta is the founding President of the International Association of Sport Kinetics (IASK) and a well-known researcher. He has published numerous books and papers focusing strongly on the advancement of human development and sport kinetics. 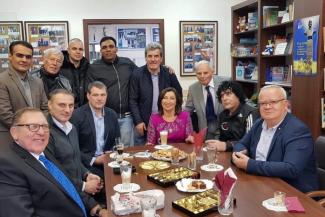 The Rayko Petrov Award is named in honor of Rayko PETROV, a coach, scientist, pedagogue and outstandingly erudite person who dedicated all his life to the "romantic idea, love, and magic…" of wrestling. His published hundreds of titles in scientific publications, textbooks, manuals, programs, sports regulations and over 80 books. He was inducted into the UWW Hall of Fame in 2010. 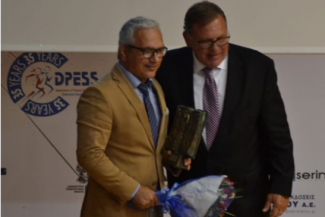 CORSIER-SUR-VEVEY, Switzerland (May 20) -- Dr. Ioannis Barbas has been awarded the 2019 Rayko Petrov Award for Scientific Contributions to Wrestling by the the International Network of Wrestling Researchers (INWR) and the Scientific Commission of United World Wrestling.

The award was presented in Komotini, Greece by Dr. David Curby, the Director of the INWR.

Following a mat career as a Greco-Roman wrestler for the Greek National Team, Ioannis began his early academic career in the Department of Physical Education and Sports Science at the Democritus University of Thrace.

Dr. Barbas continued his studies at the National Academy of State in Sofia where he studied with scholarship and gained his PhD in Physical Education in 2001 under the tutelage of Dr. Petrov.

He's the chair of Wrestling at the Physical Education and Sports School of the Democritus University of Thrace. In 2007 he was one of the founding members and deputy director of the INWR and has helped organized 13 International Scientific Wrestling Forums and Symposiums.

Dr. Barbas has also presented ninety-six (96) papers at scientific conferences and symposia around the world including the "Wrestling+ Injury Prevention Program for Young Athletes" which was created in cooperation with his colleagues from the Rehabilitation Laboratory of Democritus University of Thrace.

He also created the “Barbas 3D Wrestling Dummy” and has written and translated four books.

The Rayko Petrov Award is named in honor of-PROFESSOR RAYKO (1930 – 2011). Petrov was a coach, scientist and pedagogue who dedicated all his life to wrestling. Prof. Rayko Petrov’s works are numerous; hundreds of titles in scientific publications, textbooks, manuals, programs, sports regulations and over 80 books. The message in all these works is unambiguous: wrestling existed in the past, exists today and shall exist in the future as it is a cultural factor in human society. It is an integral part of traditions, folklore, literature and art. It is an integral part of people's lives. Prof. Rayko Petrov’s works reflected his personality – a brilliant scientist with outstanding intellectual capacity for whom coaching was not simply work, but rather a science and a way of forging human character.