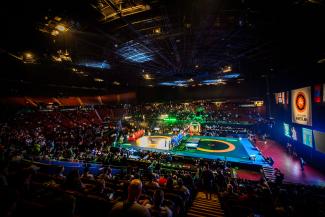 CORSIER-SUR-VEVEY (July 26) -- United World Wrestling’s Executive Board today appointed a Special Commission with the mandate to review the doping cases related to the Russian wrestlers currently qualified to compete for the Rio Games.

The commission’s deliberations will include a review of the findings from the McLaren Report, a detailed report of the doping-tests results administered by various international doping agencies and a review of any previous bans on Russian qualified wrestlers. These findings will determine the list of Russian wrestlers to be presented to the IOC for entry into the Rio Olympic Games.

The Special Commission is scheduled to publish its decision regarding the acceptability of Russian wrestlers for the Rio Games before the end of the day Thursday, 28th of July. Per the guidelines set by the International Olympic Committee the names and cases of those approved are then handed over to a representative from the Court of Arbitration for Sport (CAS) who will make the final decision on the eligibility of commission-approved Russian athletes.

The decisions made by the Special Commission will be in accordance to the conditions outlined by the IOC Executive Board criteria on the participation of Russian athletes in Rio de Janeiro.