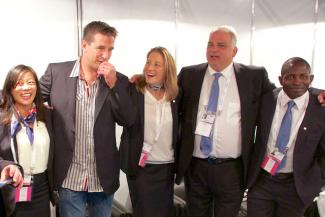 CORSIER-SUR-VEVEY – FILA, the international governing body for wrestling, is participating in the #MyWrestlingFamily social media campaign launched in coordination with the promotion of May as World Wrestling Month.

World Wrestling Month was developed during last year’s successful international campaign to reinstate wrestling as an Olympic sport. In 2013 more than 100 of FILA’s national federations took part in unique festivities, announcements and government proclamations throughout the month of May in support of wrestling. This year FILA and its 177 national federations are hoping to promote World Wrestling Month by hihglighting the continued unity of the wrestling community.

“As we saw last year, wrestling is a worldwide sport,” said FILA president Nenad Lalovic. “Our success in getting wrestling back into the Olympics depended on the strength of our wrestling family. There is no question that regardless of nationality wrestlers are a strong and unique family.”

To help spread the message of worldwide cooperation and support FILA has asked the wrestling community to support of the social media hashtag, #MyWrestlingFamily by posting photos of themselves with current and former teammates, friends of the sport and anyone else they consider to be a member of their wrestling family.

“We are a passionate and committed community,” said Lalovic. “And while we are still fighting to regain our full-time Olympic position it’s important to remind ourselves that our sport and relationships are truly one-of-a-kind.”