Snyderlaev: Most Captivating Rivalry of the Decade Takes Center Stage 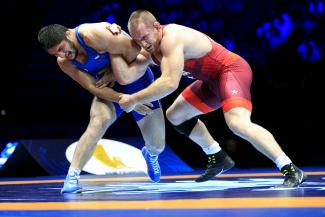 CORSIER-SUR-VEVEY, Switzerland (December 23) -- It is the wresting version of "When Worlds Collide."

Abdulrashid SADULAEV (RUS) and Kyle SNYDER (USA), born just six months apart, had been on parallel tracks throughout their careers, both winning senior world freestyle titles in 2015 and an Olympic gold at Rio 2016, all before their 21st birthdays.

Then Sadulaev decided it was time to give himself a more formidable challenge, and he moved up a weight class to 97kg to face Snyder at the Paris 2017 World Championships. It was immediately labeled "The Match of the Century," and as an added bonus, the team championship was on the line as well.

The rivalry dubbed "Snyderlaev" that started that day in the French capital between the two brawny stars mesmerized the wrestling world, as fans marveled at the speed and athleticism of the two behemoths at such a heavy weight.

The gold went to Snyder in an absolute thriller, with the American scoring the winning points of a 6-5 decision in the final 30 seconds. A year later in Budapest, it would be the Russian who would come out on top, ending the clash with an innovative fall in just 70 seconds.

A third and highly anticipated "Snyderlaev III" at this year's worlds in Nur-Sultan never materialized, as London 2012 Olympic champion Sharif SHARIFOV (AZE) crashed the party by beating Snyder in the semifinals. Sadulaev then defeated Sharifov in the final for his fourth world title.

"In our weight category, there are so many wrestlers with many titles," Sadulaev said. "Even in the final, I met an Olympic champion."

Asked if he regretted not getting to face Snyder for the gold, Sadulaev replied, "No, because the most important final is still waiting for us, the Olympic Games."

Not to take anything away from Sharifov, but a "Snyderlaev" showdown at the Tokyo 2020 Olympics to break their tie would not go unappreciated.

Sadulaev, from the wrestling hotbed of Dagestan in southwestern Russia on the Caspian Sea (Sharifov is also a native of the republic), started his international career with back-to-back world cadet golds in 2012 and 2013. A few months after the latter, he was defeated at the Golden Grand Prix in Baku--he would not lose again until some four years and 75 matches later, in the Paris clash with Snyder.

On the other side of the Atlantic, Snyder was having similar success growing up in the state of Maryland. A world junior champion in 2013 and bronze medalist in 2014, he won the gold in his senior world debut in 2015, making him, at 19, the youngest American world champion in history. A year later, he became the nation's youngest Olympic champion at Rio 2016.  Meanwhile, he was also attending Ohio State University, where he captured three straight NCAA titles from 2016 to 2018.

In the Paris final, the action got started early, as Sadulaev scored a takedown in the first 15 seconds with a show of nimbleness and agility. With Sadulaev on his knees and Snyder sprawling, the Russian raised up to get Snyder off his feet, then slipped to the side and around to the back for the 2 points.

Snyder cut the lead to one with a step-out at :44, but Sadulaev responded with a step-out his own to go up 3-1 a little over a minute into the match. In the final 30 seconds of the first period, Snyder used a snapdown to spin behind to make it 3-3.

In the second period, Sadulaev regained the lead with a low single for a takedown, but with 40 seconds left, Snyder cut the gap to 5-4 when a double-leg attack resulted in a step-out. As the clock started winding down, Snyder countered a tackle attempt and got behind with :34 left for the decisive points.

A year later and a year wiser in Budapest, Sadulaev kept his distance to avoid Snyder's powerful snapdown. The Russian shot for a single leg and got a firm hold on Snyder's right leg. As Snyder sprawled, Sadulaev locked up his left arm, then executed a barrel roll that sent Snyder flopping to his back. He held him down with his back on Snyder's chest and both arms locked up, before flipping onto his front and finishing off the fall at 1:10.

"Everybody knows Sadulaev is a very talented wrestler," Snyder said. "He hit me with a good move and it worked out well for him tonight."

The two share something is common beyond their wrestling acumen--they are both deeply religious, Sadulaev as a Muslim and Snyder as a Christian.

After losing to Sadualev in Budapest, Snyder was asked how the loss defined him.

"Wins or losses don't define me," he said. "I mean, I love wrestling, it's a big part of my life, but I'm not defined by the sport. I'm defined by my faith in Jesus. So no matter what happens to me on the mat, nothing really changes." 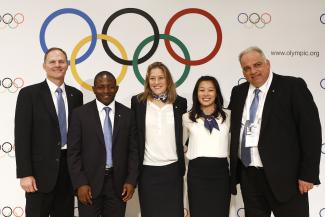 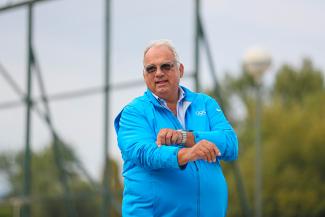