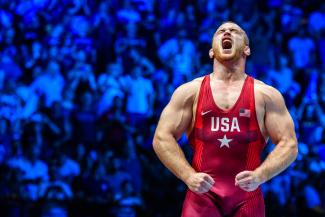 “This is great because Team USA is built from a ton of amazing and talented athletes. To be awarded this title is pretty special,” said Snyder.

Snyder becomes just the fourth wrestler to win a USOC Athlete of the Year award, joining Olympic and World champions John Smith in 1990, Rulon Gardner in 2000 and Jordan Burroughs in 2015.

Snyder won the 97 kg World gold medal in what was dubbed the “Match of the Century,” defeating Olympic champion and two-time World champion Abdulrashid Sadulaev of Russia in the finals. His win gave the USA the World Team title over Russia by one team point.

“In the World finals, I faced someone that many people think is one of the greatest of all time, and I competed well. I was able to train hard both mentally and physically for the World Championships,” said Snyder.

“We are really excited to see Kyle recognized by the U.S. Olympic family for his incredible contributions to USA Wrestling’s program and the U.S. Olympic movement. Congratulations to Kyle, his family, his coaches and his teammates on this achievement,” said USA Wrestling Executive Director Rich Bender. 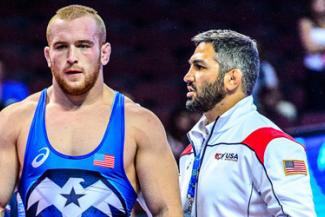 The United States edged Russia by one point to win the 2017 Freestyle World Team Title, its first in 22 years going back to 1995, and only its third ever.

“It is an honor to be included in this group of excellent coaches, which is humbling. A good plan is contingent upon good people in the right places. We have a vision to be the best and believed we could be World Champion. It is a victory for everybody,” said Zadick.

“We are extremely excited to see Bill Zadick recognized with such a prestigious honor. In the short time that Bill has been National Freestyle Coach, he has established himself as one of the very best coaches and leaders in Olympic sport. He is a great coach but even a better person,” said Bender.

Zadick is the first USA Wrestling coach to win the USOC Olympic Coach of the Year award, and only the second to win any USOC coaching award.

2017 Women's Freestyle Matches of the Year

The best women’s wrestling matches of the year included two match-ups that pegged previous age-level and senior world champions against each other. The third match featured an ending with quite the proposal.

53kg World Championships GOLD: Vanesa KALADZINSKAYA (BLR) v. Mayu MUKAIDA (JPN)
Vanesa Kaldzinskaya showed no sign of panicking in the 53kg world finals, even while trailing 6-0. The 2012 world champion used a step out late in the first period to narrow Mukaida’s lead to five points. Her resilience was apparent throughout the match and eventually paid off with 10 seconds remaining as Kaldzinskaya’s four-point move gave her the 8-6 win.

75kg World Championships GOLD: Yasemin ADAR (TUR) v. Vasilisa MARZALIUK (BLR)
After picking up the first takedown, five-time world team member Yasemin Adar trailed on criteria heading into the second period. With under a minute to go, Adar used a late takedown to take the 4-4 lead on criteria. Adar tacked on one more point and won 5-4.

After Adar’s gold medal celebration, her boyfriend came on the mat, dropped to one knee and proposed to Yasemin.

63kg World Championships GOLD: Orkhon PUREVDORJ (MGL) v. Yuliia TKACH OSTAPCHUK (UKR)
In a battle of junior world champions, Orkhon Purevdorj needed three takedowns to defeat Yuliia Tkach Ostapchuk. Purevdorj picked up an early takedown in the first and led 2-1 after three minutes of action. Tkach Ostapchuk answered in the second period with a takedown of her own, but it was Purevdorj’s two second-period takedowns that gave her the 6-3 victory.