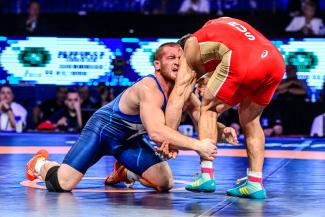 LAS VEGAS, Nevada (September 11) – Kyle SNYDER (USA) snapped up a late takedown and held on for a 5-5 win on criteria Friday evening to claim the freestyle 97kg crown at the Senior Wrestling World Championships.

Snyder, the 2013 junior world champion, snagged the foot of defending champion Abdusalam GADISOV (RUS) for a 5-4 lead with 30 seconds remaining in the day’s finale at The Orleans Arena. 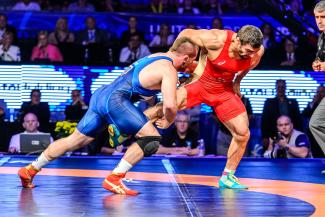 He then shrugged off a penalty for fleeing to win by having scored two 2-point techniques to Gadisov’s one.

“The goal has always been winning the gold medal at the senior level, whether it was the world championships or the Olympics,” Snyder said of his first senior crown. “I worked harder for this (than for the junior title), so it was sweeter to win this one.” 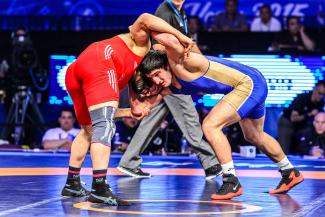 While most of Sadulaev’s bouts end in fall or technical fall, Yasar held his encounter with the young defending champion to a decision on points for the second year in a row. 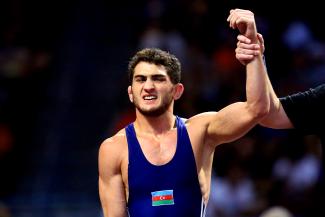 Meanwhile, at 61kg, defending champion Haji ALIEV (AZE) returned to form with a series of gut wrenches on his way to a 10-0 technical fall over BATBOLD Nomin (MGL).

It was Aliev’s first tournament triumph since winning the world title one year ago.  Friday evening’s win was dedicated to his daughter, reportedly born just before Aliev came to Las Vegas for the championships.

In the final women’s event of the championships, Oksana HERHEL (UKR) spun behind a pair of attempted takedown attempts for a 4-0 lead in the first period and hiplocked out of another in the second to forge a 10-7 victory over defending champion SUKHEE Tserenchimed (MGL).

Japan won the team title with three gold medals, a silver and a bronze for 51 points, followed by China with 42 and the United States with two gold medalists and 31 points.

Competition concludes Saturday with bouts at 57kg, 70kg, 75kg and 125kg in freestyle.