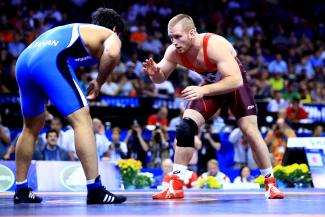 Widely regarded as the toughest freestyle tournament in the world, the Ivan Yarygin begins Friday morning in Krasnoyarsk, Russia. This is the first of the four freestyle specialty ranking tournaments of the season. The additional specialty tournaments include the Tbilisi GP (GEO), South Africa Open (RSA) and the Medved (BLR).

70kg
Israil KASUMOV (RUS) has not lost at the Yaryin since 2015. Looking to give him that first loss will be 2016 world champion Magomed KURBANALIEV (RUS) and 2016 Olympian Frank MOLINARO (USA).

A darkhorse at this weight to keep an eye on would be 2017 Grand Prix of Paris champion, David TAYLOR (USA).

92kg
Down from 97kg, 2016 champion, Abdulrashid SADULAEV (RUS) is the front-runner to take the 92kg crown. Sadulaev is competing in his first Yarygin since 2014 where he defeated Shamil KUDIYAMAGOMEDOV (RUS) to win the 86kg crown. Among his toughest competition will be 2014 Yarygin champion and 2012 Olympian, Anzor URISHEV (RUS).

97kg
The clear-cut favorite to win the title is defending champ, Kyle SNYDER (USA). This will be Snyder’s third time making the trek to Krasnoyarsk. He has competed at this event two previous times, taking third in 2016 and winning it all a year ago.

55kg
Bilyana Zhivkova DUDOVA (BUL) who narrowly missed out on a medal at the 2017 World Championships, cadet world champion Andoria Hanako SAWA (JPN) and Tatyana KIT (UKR) U23 bronze medalist will each be looking for their first Yarygin crown.

57kg
World bronze medalist from 2014 Iryna CHYKHRADZE (UKR) will be tasked with stopped Katsuki SAKAGAMI (JPN) from defending her Yarygin championship from a year ago.

59kg
The front runner at 59kg is 2017 World finalist Allison RAGAN (USA). Ragan wrestled in her first Ivan Yaryin a year ago, where she finished in third place.

65kg
World finalist from 2015 Petra OLLI (FIN) competes in her first Yarygin since 2014 where she took home a bronze medal.

68kg
Last year, Tamyra MENSAH-STOCK (USA) defeated Nasanburmaa OCHIRBAT (MGL) in the finals of her first Ivan Yarygin. This season, she’ll have to go through Olympian Cherkasova, Alla (UKR) or Mai HAYAKAWA (JPN) if she hopes to leave Krasnoyarsk with her second title.

*All preliminary line-ups are subject to change.