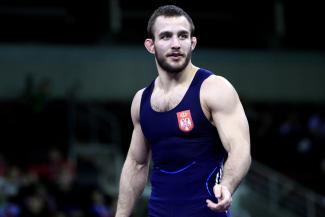 Nemes, a silver medalist in last summer’s European Games, held on for a 3-3 win on last-point criteria over Zugaj in the 75kg semifinals at Arena Riga and will face Zurabi DATUNASHVILI (GEO) for the gold medal in the evening.

Nemes will be seeking his first continental crown since winning the European under-23 crown last March. Datunashvili will be wrestling in his first European championships final since 2013, when he was the silver medalist. 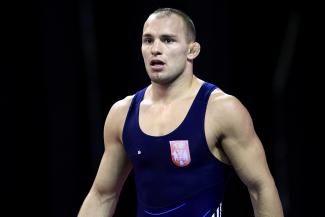 Maksimovic, meanwhile, edged 2014 European silver medalist Hasan ALIYEV (AZE), 3-1, in the final 20 seconds of the quarterfinals at 71kg and advanced the gold medal match to face Varsham BORANYAN (ARM), who is wrestling in his second European championships.

In addition to Serbia’s pair, Robert KOBLIASHVILI (GEO) advanced to the 85kg finals, giving Georgia two wrestlers in the gold medal bouts in the final session of competition Sunday evening.

Like Datunashvili, Kobliashvili had to defeat a European Games gold medalist to reach the finals.

Datunashvili defeated Elvin MURSALIEV (AZE), 3-1, in the 75kg semifinals, while Kobliashvili held on for a 1-1 triumph Evgeni SALEEV (RUS) at 85kg.

Earlier, Saleev, the world silver medalist at 80kg in 2014, scored a late takedown and gut wrench for a 5-1 win over two-time world bronze medalist Viktor LORINCZ (HUN) in the 85kg quarterfinals.

In Sunday evening’s other finals, Kobliashvili squares off with European Games silver medalist and world champion Zhan BELENYUK (UKR) for the 85kg crown. Belenyuk will seek his second continental title after winning in Vantaa, Finland in 2014.

The 80kg final pits Edgar BABAYAN (POL), wrestling in his first European championships since 2008, against Pascal EISELE (GER) who finished in fifth place at 75kg at the European Games. 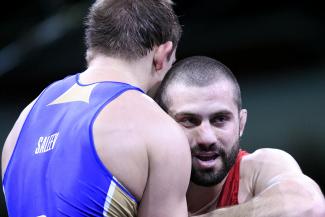