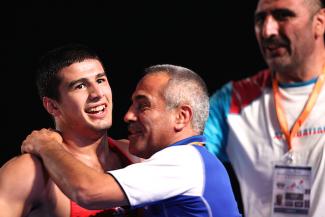 ZAGREB – Defending champion Sergey SEMENOV (RUS) repeated as 120kg gold medalist, but Azerbaijan with five champions ran away with the team title on the final day Greco-Roman at the Junior Wrestling World Championships.

Semenov notched four wins by fall or technical fall – all well inside 60 seconds -- in the preliminary rounds at the Dom Sportova arena, but had to work the entire six minutes of the final for a 3-1 win over two-time European junior silver medalist Mantas KNYSTAUTAS (LTU).

With five gold medals and one silver – from Ruhin MIKAHILOV (AZE) at 66kg – Azerbaijan cruised to the team title with 59 points.  Georgia with one champion and three bronze medalists was second with 44 points, while Russia had to settle for third place with 31 points.

In all, 18 countries from four continents took home at least one medal from the two days of Greco-Roman competition. A total of 218 wrestlers from 48 countries took part in the Greco-Roman events.

Wrestling continues Thursday with the first day of Female Wrestling in categories 44kg, 51kg, 59kg and 67kg.  Wrestling begins at 10:00 with the medal finals and awards ceremonies at 18:00.

In the medal finals on Wednesday:

Murad MAMMADOV (AZE), also a cadet world champion in 2012, scored with gut wrenches on both sides of the break for a 4-0 win over 2012 cadet world bronze medalist Rustam TEIISHOV (KGZ).

In the bronze medal bouts, European junior bronze medalist Gizo MELADZE (GEO) locked on for a lift in the second period and converted for a fall against Ion LEFTER (MDA) at 3:56. Aslan VISAITOV (RUS) rolled up a 10-1 technical fall at 3:41 against Asia junior runner-up Behrooz MALEKI (IRI).

Former junior world silver medalist Shmagi BOLKVADZE (GEO) kept the pressure on Ruhin MIKAHILOV (AZE) throughout the six-minute final – even after a disqualification was called and then erased at 5:22.

The earlier call was not allowed since a match-ending disqualification must be a unanimous decision of the three-member officiating crew.  The official final score at the end of regulation time was 3-0 for Bolkvadze.

For the bronze medals, Africa junior champion Mahmoud EBRAHIM (EGY) got a late force-out for a 1-1 criteria win over 2013 Daniel CATARAGA (MDA) and a lost challenge made it 2-1.

Zoltan LEVAI (HUN) scored a lift point in forced par terre and then received a penalty point for the second par terre for a 2-0 win over Arslan CENGIZ (TUR).

In a replay of June’s junior European championship final, Islam ABBASOV (AZE) came from behind twice – with a duck-under to go-behind and bodylock to back-arching throw -- to defeat Denis KUDLA (GER), 5-3.

Dimitros TSEKERIDIS (GRE) got a late force-out for one point and a second on a failed challenge for a 4-2 win over Emil SANDAHL (SWE) for one bronze medal.

Lasha GOBADZE (GEO) scored an early arm throw and a front headlock and turn against Mohamed METWALLY (EGY) and made it stand for a 6-0 win and the other bronze medal.

Osman YILDIRIM (TUR) stunned European champion Beka KANDELAKI  (GEO) with a back drop and then pressed for the fall at 2:35 for one bronze medal, while 2011 cadet freestyle world champion Adam COON (USA) cranked Arata SONODA (JPN) over with an arm bar for the fall at 0:45.