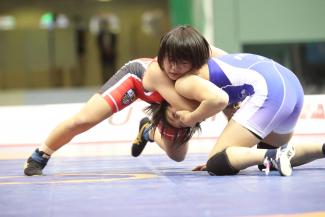 TOKYO -- Tsugumi SAKURAI emerged as the next prospective star from Japan's seemingly bottomless pool in women's wrestling with an historic win, while two male wrestlers bound for the Asian Olympic qualifying tournament were left reeling by losses on the opening day of the All-Japan Championships.

Sakurai earned not only her first senior national title in the women's 55kg class with a 3-0 victory in the final over Ibuki TAMURA at Tokyo's Komazawa Gym, but also became the first-ever national champion from newly founded Ikuei University.

Sakurai, who finished second last year as a high schooler in the tournament also referred to as the Emperor's Cup, came out on top in a weight class that included former world U23 champion Saki IGARASHI and former world junior champion Umi IMAI.

"I didn't have any matches this year and I practiced aimed at this tournament, so I'm happy to win the title," said Sakurai, who had not wrestled since winning the gold at the Klippan Lady Open in January.

Wrestlers around the world have been affected by the coronavirus pandemic, and Japan has been no exception. Competitions only restarted in October, and the four-day All-Japan Championships are being conducted under the strictest of protocols as Tokyo and other major cities around the country suffer from a surge of infections.

Along with the masks, hand sanitizers and temperature checks that have become the norm, no spectators--even family--are allowed, and the press has been limited to 30 members, forbidden from any contact with the wrestlers outside of socially distanced press conferences.

Each weight class was limited to a maximum of eight entries, and there was a repechage round leading to a single bronze-medal match.

All but one of the eight wrestlers who have already clinched spots at the Tokyo Olympics are not entered, while all but one of the 10 who will take part in the Asian Olympic qualifier in Xi'an, China, in March are participating. Only Yui SUSAKI at women's 50kg from the latter group opted not to enter.

The ones who will be heading to Xi'an, China, earned their tickets with victories at last year's Emperor's Cup, and Japan officials decreed that they will keep their places regardless of how they fare at this year's tournament.

That's a relief for Yuta NARA and Tetsuya TANAKA, who failed to repeat as champions at freestyle 125kg and Greco-Roman 97kg, respectively. For Nara, a 5-1 loss in the semifinal to Masaaki SHIKIYA ended his run of four consecutive titles.

"It was my first match since the Asian Championships in February," said Nara, who appeared at his second senior World Championships last year. "I was careful about my conditioning and weight loss, but I was defeated. Shikiya was better in terms of preparation and being physically fit."

Shikiya himself had to settle for the silver medal, as 32-year-old Masayuki AMANO scored with a roll off the par terre position in the second period and held on for a 3-2 victory for his first national title since 2011.

Tanaka's reign as freestyle heavyweight king was brought to an end when he was dealt a 3-1 loss in the final to Taiki YAMAMOTO, who regained the title he had won back-to-back in 2015-16.

"At last year's Emperor's Cup, I not only lost, I didn't even finish third," Yamamoto said. "At that time, I felt fed up with wrestling. It was a something I had never tasted before.

"To not even win a medal in a tournament linked to the Olympics was really depressing. But a number of coaches offered words of encouragement and that led me here, and I came in with strong determination to win."

Sakurai, who won her first two matches by technical fall, has set her sights on the 2024 Paris Olympics and said she has made great progress since enrolling at Ikuei, which is located north of Tokyo in Takasaki, Gunma Prefecture, and is already challenging powerhouses like Shigakkan and Nippon Sports Science University.

"This year, I started college and before that, I had only a few people to practice with and not so many matches," Sakurai said. "Since starting college, there are many practice partners in my weight class. In that, there's times I win and times I lose, and it's gradually made me stronger as I prepared for the challenge here. "

Sakurai captured world cadet titles in 2016 and 2017, and was the bronze medalist at the Asian juniors last year. In the final at this year's Klippan, she defeated veteran Sofia MATTSON (SWE).

While making history for her university, she spreads the credit around.

"Ikuei University has newly opened and even though I was the first to win a [national] title, I had the support of many people around me which enabled me to be successful," she said. "I was allowed to be in a good environment for wrestling, I want to win for everyone who helped me."

In the other women's weight class in action, world bronze medalist Masako FURUICHI had only one match at 72kg, but it didn't even last a full period as she overwhelmed Kanon KOBAYASHI by 10-0 technical fall in 2:28. The weight class had just three entries.

"I only had one match in this tournament, but I did what I have to do," said Furuichi, who made an unsuccessful bid last year for the Olympic place at 68kg. Her next objective is a gold at the Asian Championships in February in Almaty (assuming it is held), having won a silver in 2017 and bronze in 2018. 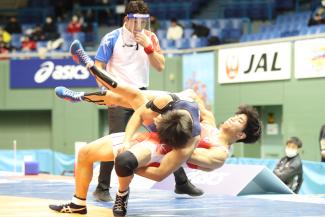 
In freestyle, Jintaro MOTOYAMA, the 2019 world junior silver medalist at 74kg, dropped back down to 70kg and picked up his first national title by beating Hirotaka ABE, 8-3, in the final.

Motoyama previously triumphed in 2018 at the Meiji Cup All-Japan Invitiational Championships, the second senior national tournament used as a qualifier for global events. Last year, he moved up to 74kg in a bid for the Tokyo Olympics that came up short.

"It's my first tournament in awhile, so about a week ago my nerves starting getting to me. But today, I didn't feel nervous," said Motoyama, a student at NSSU. "I went up to 74kg for the Olympic qualifying, but as I normally weigh only around 74kg, this is the best weight class for me."

Motoyama became the seventh different champion in the seven years since the 70kg division was established.

At 61kg, Kodai OGAWA joined NSSU teammate Motoyama as a national senior champion when he won his first title with a 6-2 win over Shoya SHIMAE in the final.

The other Greco titles at stake went to defending champion Satoki MUKAI at 82kg and 2018 Asian silver medalist Tsukasa SHIMOYAMADA at 67kg.

Mukai moved closer toward matching his father's seven straight national titles when he defended his crown with a 5-0 victory in the final over Yoji KAWAMURA in a repeat of the 2019 final.

Shimoyamada regained the title he won in 2017 with a 2-1 in the final over 2018 world U23 champion Katsuaki ENDO. From the par terre position, Shimoyamada executed a throw that, while not landing Endo onto his back, put him outside the line for the winning point.

Shimoyamada took advantage of the absence of Shogo TAKAHASHI, who had beaten him in the final each of the past two years but is entered at 72kg as he prepares for the Asian Olympic qualfier at 67kg.

Of note was the performance of former high school star and now NSSU freshman Kyotaro SOGABE, who won the bronze medal with a technical fall over national college champion Shintaro YOSHINAGA.

In the repechage round, Sogabe overcame a 5-0 deficit to defeat Takayuki INOGUCHI 9-5. It was Inoguchi who last year ended the Olympic aspirations of Shinobu OTA, when the Rio 2016 silver medalist at 59kg made a last-ditch attempt to make it Tokyo by moving up to 67kg.