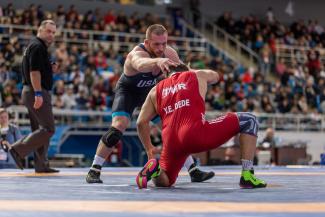 KRASNOYARSK, Russia (January 27) -- Russia, Turkey and the United States each have representatives competing in the final championship session at the 2018 Ivan Yarygin. Russia leads the way with five finalists, followed by the United States with two and Turkey with one.

The finals will feature a pair of Olympic champions in Abdulrashid Sadulaev (RUS) and Kyle SNYDER (USA) who are looking to win their second Yarygin titles. Sadulaev’s last Yarygin title came in 2014 and Synder’s came last season. If Synder wins tonight, he’d become the second American to ever win back-to-back Yarygin titles.

Heading into the final two women’s wrestling weight categories, China and Japan are tied with three gold medals apiece. The Chinese have an opportunity to take the gold medal lead as they have two wrestlers competing in tonight's finals. The remaining two representatives in the final championships session hail from Japan and Russia.

THIS IS THE START OF THE DAY THREE LIVE NOTEBOOK

The final day of wrestling at the 2018 Ivan Yarygin kicks off at 11:00am. Here is where you can WATCH the four men's freestyle and two women's wrestling categories that are in action today.

Here is everything that you may have missed from DAY TWO of the #Yarygin2018.

11:29 AM  - Qualification matches are being wrestled on Mats A and B.

12:15 AM - The crowd erupts as PUREVJAV Unurbandat (MGL) throws T. STEFANIK (USA) and picks up the fall in the FS 86kg QUALIFICATION round.