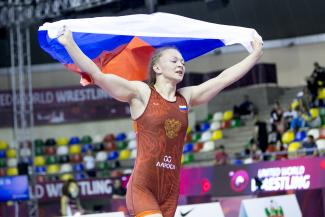 The Klippan Lady Open and Yarygin bronze medalist scored the only first-period takedown with a knee-tap, taking the 2-1 lead into the second period.

Andreeva fell behind 3-2 after giving up a double leg in the opening seconds of the final period. With under 90 seconds left, the Russian wrestler shot a low-level double leg and picked up the match-deciding takedown, improving on her second-place finish from the 2016 U23 European Championships.

Mariia Kuznetsova gave Russia their second gold medal of the evening with her 10-5 performance over Sofiya GEORGIEVA (BUL) in the final bout at 65kg.

Kuznetsova surrendered the first takedown of the match, but rebounded with a takedown to a right-sided gut, ending the first period in the lead, 4-2.

The Russian wrestler closed the second period with a takedown and two counter exposures to win the match by five points.

France, Turkey, and Ukraine also finished the day with a gold medalist.

Yetgil scored an activity clock point and a step out, taking the two-point lead into the second period.

Last year’s cadet and junior world bronze medalist faced a two-point deficit after giving up a four-point throw. With 30 second left, Yetgil locked up a takedown and a bow and arrow, securing four points and the 6-5 victory.

Larrouque used an activity clock point, a step out and a second-period takedown to blank Zimiankova.