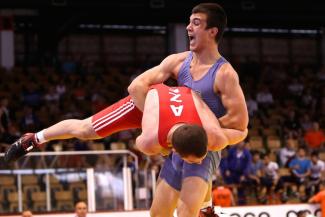 HUMENNE, Slovakia – Russia won a pair of titles on the final day of Greco-Roman bouts to claim the Greco-Roman team title at the Cadet Wrestling World Championships on criteria over Azerbaijan.

Atmir KOTCEV (RUS) and Viktor VEDERNIKOV (RUS) won at the two lightest weight categories to give Russia three gold medalists and 49 team points, while Nijat ABDULLAYEV (AZE) and Soslan FANZIEV (AZE) came up short in the last two finals to leave Azerbaijan at 49 points without an individual champion.

With a chance to lift Azerbaijan to the team title in the Greco-Roman finale, defending world champion Soslan FANZIEV (AZE) fell behind early to Vladen KOZLIUK (UKR) and could not recover as Ukraine crowned its first champion of the world meet at 85kg.

Iran finished in third place with 43 points and its first champion of the competition, Arman ALIZADEH (IRI) at 76kg, who won the Asian crown in May.

Meanwhile, first day leader with two champions and a bronze medal, Georgia could only manage a silver medal at 46kg and slumped to fifth place overall with 39 points behind Kyrgyzstan’s 41 at Humenne Hockey Stadium.

On the final day of Greco-Roman competition:

42kg (16 entries)
Trailing 2-1, Atmir KOTCEV (RUS) hit a last-second headlock that landed out-of-bounds but it was enough for a 6-2 victory over European champion Kerim KAMAL (TUR) and the gold medal. Kotcev’s throw was good for four points and a bonus point when the challenge showed the Kamal’s head hitting out at 3:59.

In the bronze medal bouts, Alireza NEJATI (IRI) scored a go-behind and landed on top an attempted throw by Hayk MELIKYAN (ARM, e5) to come from behind and win 9-4, while Istvan VANCZA (HUN, e5) stepped inside for a bodylock to drop Mamurbek MUKHAMEDALI (KAZ) to his back for a 12-9 win in the last 15 seconds.

46kg (17 entries)
European silver medalist Viktor VEDERNIKOV (RUS) stepped over a first-period gut wrench attempt by Leri ABULADZE (GEO) and made it stand for a 2-1 victory and the title world champion.

Seymur HUSEYNOV (AZE) went from drag behind to a lift and back-arching throw for a 9-1 technical fall over Ozen TANGA (TUR) as  the 2013 European bronze medalist bagged a world bronze medal.

Poaya NASERPOUR (IRI) overcame a false start penalty in the second period that left him at 0-3 and dropped Lihail PETIC (MDA) to his back at 3:40 for a 4-3 victory and the bronze medal.

69kg (27 entries)
Krysztof NIKLAS (POL) converted a par terre chance in the first period against Mediterranean cadet champion Antonio KAMENJASEVIC (CRO) for the world title after finishing in eighth place one year ago.

Africa champion Omar Khaled SHEHATA (EGY) received a head penalty point midway through the second period and held on for a 1-0 victory over 2013 Asia champion Rustam RAKHMATULAEV (KGZ) and the bronze medal.

European champion Islambek DADOV (AZE) squandered a five-point lead but came back with a force-out and a late go-behind for an 8-6 win over Madiyar ADILGALI (KAZ) and the bronze second medal.

76kg (24 entries)
Asia champion Arman ALIZADEH (IRI) scored with a takedown and gut wrench midway through the second period to come from behind for a 7-4 win over Nijat ABDULLAYEV (AZE).

Dogukan KURU (TUR) muscled Burgo BEISHALIEV (KGZ, 13w16) around the mat and scored with a gut wrench early on his way to a 5-0 win and a bronze medal.

European bronze medalist Vladimir STOICHEV (BUL) ducked under Nikita KLIMOVICH (BLR) for a bodylock takedown to the back and held for the fall at 3:20.

85kg (24 entries)
In a battle of bronze medalists from the European championships in May, Vladen KOZLIUK (UKR) scored with a pair of lifts in a one-sided first period that left Soslan FANZIEV (AZE) at an 8-1 deficit.  The defending world champion could only manage one force-out point in the second period of an 8-2 decision.

Marcel KASPEREK (POL) rolled up an 8-0 technical fall at 1:25 with three gut wrenches against Tatsuya FUJII (JPN) while Aleksander BARABAN (BLR) scored with a gut wrench for a 3-0 win over Timothy YOUNG (USA) for the bronze medals.