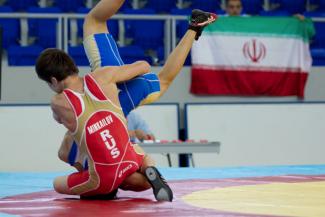 ZRENJANIN, SERBIA (Aug. 25)--Should wrestling be reinstated as an Olympic sport for the 2020 Games, the Russian National team coaches have plenty of talent from which to field a starting squad.

For the third consecutive year, Russia’s Cadet team joined their Junior-level squad in winning the world championship in men’s freestyle. The Russian’s, who earned gold at four weights and seven medals overall, won the team event with 85 points. Azerbaijan came in second with 66, followed by Iran with 56.

Kotciev scored a late takedown and exposure points to win the gold medal at 100kg. His opponent, Iran’s Aliasghar Akbarizarinkolaei had lead much of the match, but with time expiring and fans roaring the Russian big man found his attacks, and eventually the win.

Batyrbek Tcakulov (76kg) earned his position on top of the medal stand in much the same way as teammate Kotciev. Trailing India’s Balraj Kotciev 3-1 with only 30 seconds left on the clock Kotciev drove through on a double leg, scoring a three-point takedown and one-point exposure hold to win 5-3.

Kazakkhstan’s Darhan Kalkenov blitzed past Fasil Hasanov of Azerbaijan in the opening match of the night’s finals. The stocky 46kg Kazakh wrestler earned a quick takedown and used a trapped-arm gut to earn five exposure points, off two turns and a hold, winning by technical fall, 7-0 in under a minute. Takuto Otoguro of Japan and Kheyrolla Ghahramani of Iran earned the bronze.

The most exciting match of the night went to the Ukraine’s Andriy Yatsenko and Russia’s Imam Tesaev at 54kg. The duo’s combined for a style that depended on attack-first mentalities, and creative, and bendable defenses. Though challenged throughout, Yatsenko’s counter wrestling style prevailed in the end, earning the Ukrainian an 8-5 win and the gold medal. Kazakhstan’s Yerlan Abylkhan and Mongolia’s Z. Zanabazar took home the bronze medals

The American’s earned their only medal of the tournament when Aaron Pico defeated Japan’s Yuhi Fujinami in the finals at 63kg. The 16-year-old American used heavy-handed head snaps and conservative attacks to pass Fujinami’s defense and earn the 8-6 victory. Russia’s Bakar Ayubov and European Champion Teymur Mammadov of Azerbaijan wrestled well enough to win bronze.

The Cadet World Wrestling Championships are final FILA-sponsored championships before the 125th Congress of the IOC in Buenos Aires where IOC members will vote on wrestling’s proposal to be added back to the 2020 Games. The final vote of the IOC will be cast September 8th.