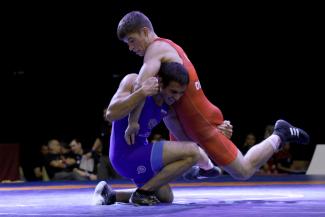 SARAJEVAO, Bosnia and Herzegovina (July 25) – Russia had a strong start to the Cadet European Championships, winning three golds and a silver in freestyle on Tuesday. 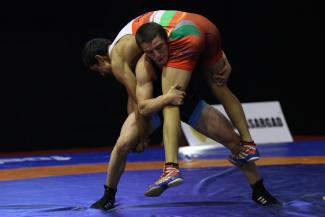 Balutuev was pushed hard in the semifinals by Ramiz HASANOV (AZE), but prevailed 4-3. In the gold-medal match, Balutuev blanked Dimitar TODOROV (BUL) 2-0. He scored a takedown a minute into the match, which turned out to be the only points scored.

Cheldiev, competing in his second Cadet European Championships, had close matches throughout the tournament, but came through to win the gold medal at 69kg. After winning by scores of 4-0, 2-1 and 6-4, Cheldiev edged Vasile DIACON (MDA) 4-4 on criteria in the finals. The Russian took a 4-0 lead into the break and appeared to be in control of the match before Diacon battled back, scoring four unanswered points in the second period, but Cheldiev held on for the narrow victory on criteria.

Shebzukhov, a returning cadet world bronze medalist, was unchallenged en route to winning the gold medal at 85kg. He registered four technical falls in four matches without surrendering a point. In the gold-medal match, Shebzukhov needed one minute and 36 seconds to earn a 10-0 technical fall over Omer AGTAS (TUR).

Giorgi TCHOLADZE (GEO) claimed the first gold medal of the Cadet European Championships, beating Tofig ALIYEV (AZE) 8-2 in the gold-medal match at 42kg. Aliyev scored first off a step out, but it was all Tcholadze the rest of the way. The Georgian used a four-point and led 4-1 at the break. He added two more takedowns in the final period to win by six. 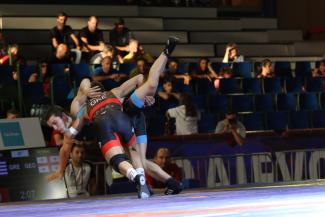 Turkey earned bronze medals at 42kg with Furkan UCOLUK and at 69kg with Umur AYBEY.

Turan BAYRAMOV gave Azerbaijan a bronze medal at 58kg to go with the silver won by Aliyev at 42kg.