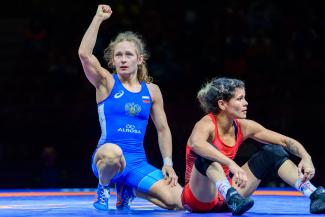 With Olympic quotas safely secured, the three Russian wrestlers at the World Olympic Qualifiers in Sofia, Bulgaria were ready to clinch the three gold medals as well.

While Olga KHOROSHAVTSEVA (RUS) pulled off a controlled 6-0 win over 20-year-old Andreea Beatrice ANA (ROU) in the 53kg final, her teammates Veronika CHUMIKOVA (RUS) at 57kg and Liubov OVCHAROVA (RUS) at 62kg claimed the top medal as their opponents injury defaulted.

There was little action in the other finals as well as Seema BISLA (IND) won gold at 50kg after Lucia Yamileth YEPEZ GUZMAN (ECU) decided to not compete after an injury.

At 68kg, local girl Mimi HRISTOVA (BUL) was crowned the champion after Elis MANOLOVA (AZE) to skip the final due to the same reason.

Alla BELINSKA (UKR) was also the beneficiary of a similar situation as Yasemin ADAR (TUR) pulled out of the 76kg due to injury.

“I need to forget my past wins and start over the next day and that is why I wrestle for the gold medal,” Khoroshavtseva said after beating Ana 6-0 in the finals.

“I can't keep thinking about the previous day because I want to wrestle every new opponent.”

Her teammate Ovcharova was also of a similar opinion despite not getting any wrestling in the final.

“I want to spar against different opponents,” she said. “Every day is a new start for me.”

On Friday, they failed to achieve their dream of winning the ticket to Olympic Games in Tokyo but the wrestlers for bronze medal bouts showed up on mat with intention in all six weight categories.

“For my team, I always say that finish the tournament,” she said. “Of course you don't have to wrestle if you have a strain.”

Samantha STEWART (CAN) stepped up on the mat with a similar motivation as she rolled to a 10-0 win over Laura Gabriela PEREDO TORRES (MEX) to capture the bronze medal at 53kg. Iulia LEORDA (MDA) beat Betzabeth ARGUELLO VILLEGAS (VEN) 10-5 in the other bout.

Adela HANZLICKOVA (CZE), who lost in the semifinal at 68kg, was trailing 0-6 when she had Buse TOSUN (TUR) to her back to get a pin and the bronze medal.

“It's difficult to motivate myself after Friday but I have this personality where I don't like to give up,” she said.

“I always have these crazy matches because I don't want to give up and that is why I wrestled for a bronze medal as well.”

Explaining her motivation to wrestle for the bronze medal despite failing to qualify for the Olympics, Niemesch said, “the tournament is not over until the last day. To motivate and to win is part of the sport and we have to do it. To go home with a medal is better than going empty handed.”

Grace Jacob BULLEN (NOR) recovered from her stunning loss to Chumikova on Friday to win the bronze medal a day later with a 12-7 win over Emese BARKA (HUN). The other medal at 57kg went to Giullia OLIVEIRA (BRA) as she won 4-0 against Laura MERTENS (GER).

The big surprise of the round came in the bronze medal bout at 76kg as junior and U23 World champion Milaimys de la Caridad MARIN POTRILLE (CUB) hung on for a 2-2 win over Martina KUENZ (AUT). In the second bronze medal bout, Catalina AXENTE (ROU) pulled off a 4-1 win over Maria Jose ACOSTA ACOSTA (VEN).

“This is everything for every wrestler. This is it,” Axente said pointing to her bronze medal. SOFIA, Bulgaria (August 15) -- The U20 World Championships return to Bulgaria with the Arena Armeec Sports Hall hosting it in Sofia. The tournament begins with freestyle and five weight classes will be in action. Wrestlers from 57kg, 65kg, 70kg, 79kg and 97kg will be on the mat.