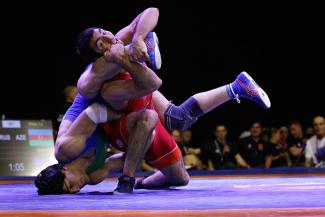 SARAJEVAO, Bosnia and Herzegovina (July 26) – A day after winning three gold medals on the first day of the Cadet European Championships, Russia added three more gold medals in freestyle on the final day of freestyle competition. 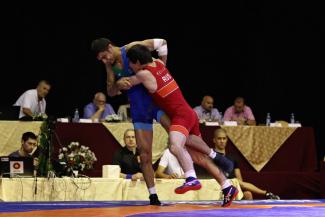 After not surrendering a point in his first three matches, Ketiia topped returning Cadet European bronze medalist Khadzhimurad GADZHIYEV (AZE) 9-5 in the finals at 63kg.

It was another Russia vs. Azerbaijan battle at 76kg as Khostikoev defeated Abdulmuslim MAMEDOV (AZE) 9-6 in the gold-medal match. The Russian raced out to a 6-0 lead before Mamedov mounted a strong rally, scoring six consecutive points to take a 6-6 lead on criteria. Khostikoev retook the lead off a step out with just under 10 seconds left, and then added a late takedown in the closing seconds of the match off a desperation move to win by three.

Nirov upgraded his silver medal from last year's Cadet European Championships by winning gold at 100kg with a 10-0 technical fall shutout over Anil KILICSALLAYAN (TUR). He finished the tournament with four technical falls in five matches and outscored his competition 52-2.

Russia was denied gold at 46kg as Giorgi GEGELASHVILI (GEO) defeated Magomed ABDURAKHMANOV (RUS) 5-2 in a battle of returning cadet world bronze medalists. Abdurakhmanov held the 2-2 lead late into the match. With just over 30 seconds left in the match, Gegelashvili attacked and a flurry ensued, which resulted in the Georgian scoring a takedown. The call was challenged and upheld, giving Gegelashvili a three-point victory.

Returning cadet world champion Andrii DZHELEP (UKR) won gold at 54kg, earning a second-period fall over Vladimeri GAMKRELIDZE (GEO) in the finals. Dzhelep scored a first-period takedown and held a 2-0 lead at the break. With under a minute remaining, he put the Georgian on his back and secured the fall. Dzhelep concluded his tournament with three technical falls and a fall and was unscored upon in four matches.

Aleksandr BALTUEV gave Russia a bronze medal at 54kg to go along with the three golds and silver won on Wednesday.