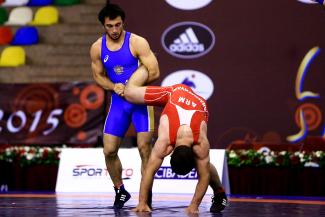 Gadzhiev, the 2014 European cadet champion, will be joined in the gold medal bouts at the Bagcilar Sports Complex by Yarygin Grand Prix runner-up Nachyin KUULAR (60kg), as well as Artem UMAROV (74kg) and Yuriy VLASKO (96kg).

Gadzhiev rolled up a pair of technical falls in the early rounds at 50kg, including an 11-1 drubbing of last year’s bronze medal winner Evgeni REBIKOV (BLR), but had a scare in the semifinals against local favorite Bekir SAHIN (TUR).

Shahin kept the semifinal close as crowd support began to grow, but Gadzhiev pulled away in the second period for a 10-2 triumph.

“We weren’t worried about Ismail; he’s a good wrestler,” coach Anvar MAGOMEDGADZHIEV (RUS) said. “But we were a little worried about the support of the people in the arena.  It was getting louder and that can have an effect on the wrestlers and the way a referee looks at a match.”

“We believe 100% that Gadzhiev will win but, you know, sometimes the future has its own plans,” the coach added. 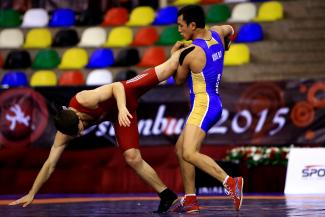 Meanwhile, Kuular advanced to the 60kg final after a 15-12 free-for-all with Dzianis MAKSIMOV (BLR) and Vlasko rallied for three takedowns in the second period for a 6-3 win in the 96kg semifinals.

The younger Erturk upset defending champion Tarzan MAISURADZE (GEO) with a takedown in the final second of the 74kg semifinal, giving the hosts a pair of wrestlers in the first day’s finals. Selim KOZAN (TUR), 2013 world cadet champion, will square off with Kuular in the 60kg final. 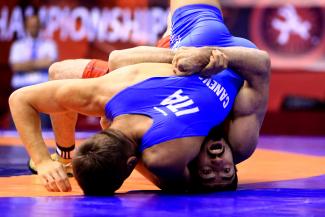