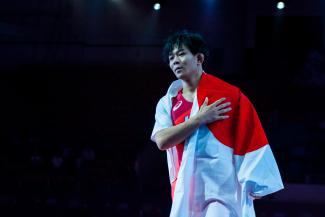 ULAANBAATAR, Mongolia (April 24) -- After a trying three years that included missing out on the Tokyo Olympics, Rio 2016 silver medalist Rei HIGUCHI (JPN) has returned to his winning ways. And he's eating normally, too.

Higuchi captured his first Asian title in dominant style, blitzing Darioush HAZRATGHOLIZADEH (IRI) 10-0 in just 46 seconds of the freestyle 61kg final on Sunday, the final day of the six-day Asian Championships in Ulaanbaatar.

"From the beginning, I thought to go with my attacking style," said Higuchi, who won all four of his matches by technical fall. "My single-leg tackles and arm locks were working from the first match, so I don't think it was too bad."

It was an otherwise good day for Iran, which added three golds to the three it won on Saturday to easily win the team title with 201 points. India finished second with 152 points, one point ahead of Kazakhstan after both had one champion and three silver medalists. 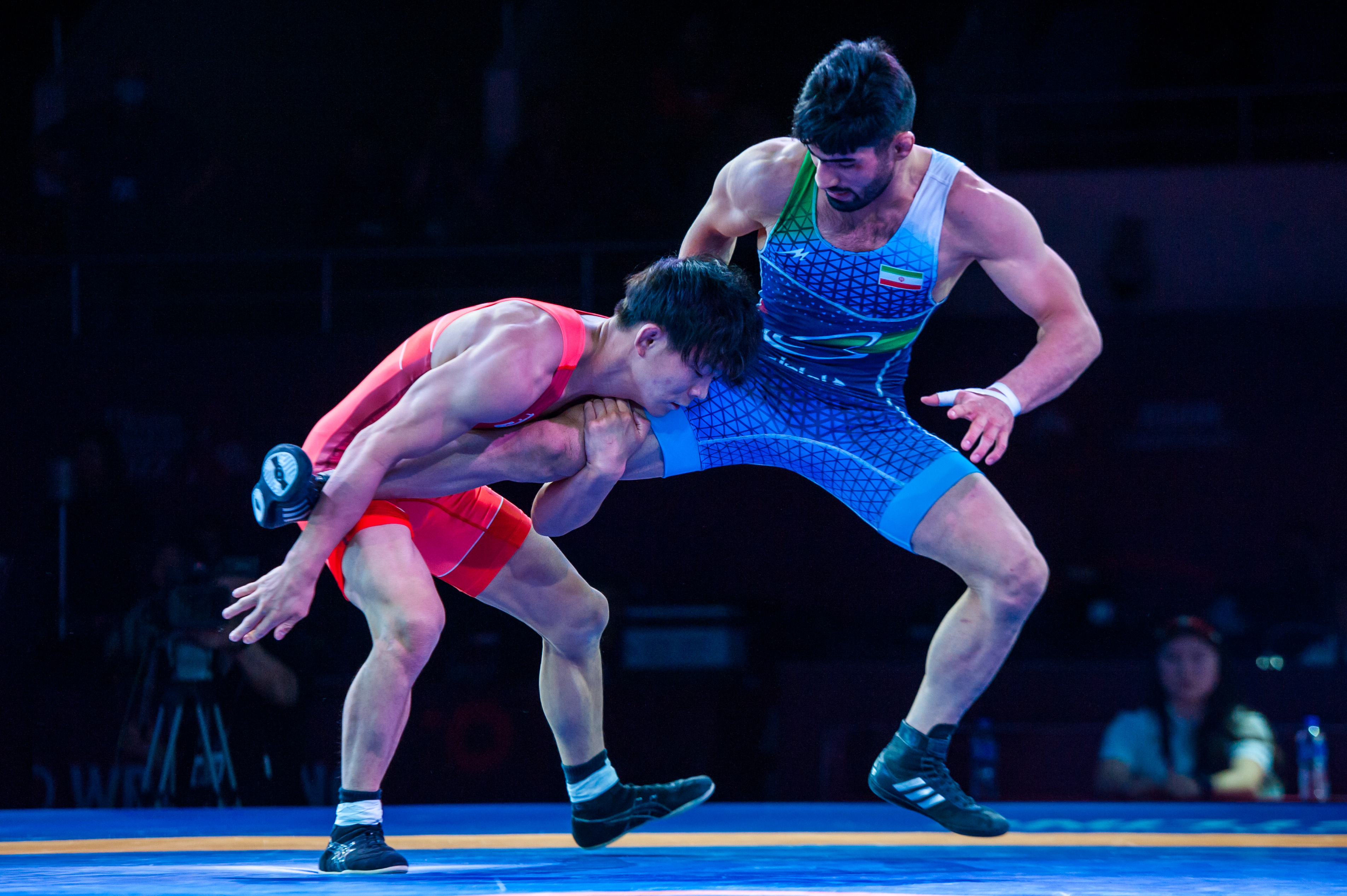 Higuchi, in making amends for a disappointing third-place finish in 2017, came out firing on all cylinders in the final, catching Hazratgholizadeh with a 4-point arm throw soon after the opening whistle. He added a pair of gut wrenches, then closed out the match with a takedown.

"I decided to give it a shot right at the start," Higuchi said of the arm throw, a common weapon used by Japanese lightweights. "From the first match, I was always using single-leg tackles and arm locks, so I thought my opponent had figured it out. So I decided to go for an arm throw from the beginning."

It marked a grand renewal for one of Japan's most promising wrestlers, who got caught up trying to find an appropriate Olympic weight.

After Rio, he moved up to 61kg and finished third at the Asian Championships in New Delhi. In late 2017 he made the jump to 65kg, where he won the 2018 world U23 title, but could not dislodge eventual Olympic champion Takuto OTOGURO (JPN) for the Olympic spot in that weight class.

After losing to Otoguro in a playoff for the Olympic spot, he decided to make the drastic drop back to 57kg, in which he had not competed since Rio. More than the domestic competition, Higuchi's battle was with the scale.

"Last year, in particular, was really bad," Higuchi said. "More than from a standpoint of wresting technique or stamina, the battle became with my weight. Last year ended with a really disappointing result. But at the end of this year, the trial process for Paris [2024] starts, I'll train harder and harder to have a better result."

Higuchi hit rock bottom in April last year when he failed to make weight at the Asian Olympic qualifier in Almaty, a tournament in which he would have been a strong favorite to take a top-two place.

The Japan federation opted to send former world champion Yuki TAKAHASHI (JPN) to the final world Olympic qualifier, where he secured a spot in Tokyo at 57kg for Japan. Takahashi then defeated Higuchi in a playoff for the spot, ending his dream of winning an Olympic title on home soil.

For now, Higuchi is happily ensconced at 61kg, where last December he finished second at the national championships. He still has to count calories, but not as drastically.

"At 61kg, I can eat normally," said the 26-year-old Higuchi, now a coach at his alma mater Nippon Sports Science University. "Cutting weight is just the usual amount so that I don't get emaciated and can be like a regular wrestler."

Asked about what lies ahead in the future in terms of his weight class and the 2024 Paris Olympics, Higuchi replied, "If I go up to the 65kg division, Takuto OTOGURO and Kaiki YAMAGUCHI are there. It would be a tough battle. Of course, at 57kg, there are many strong wrestlers such as Toshihiro HASEGAWA. I have to work hard on my wrestling and raise my level in practice." 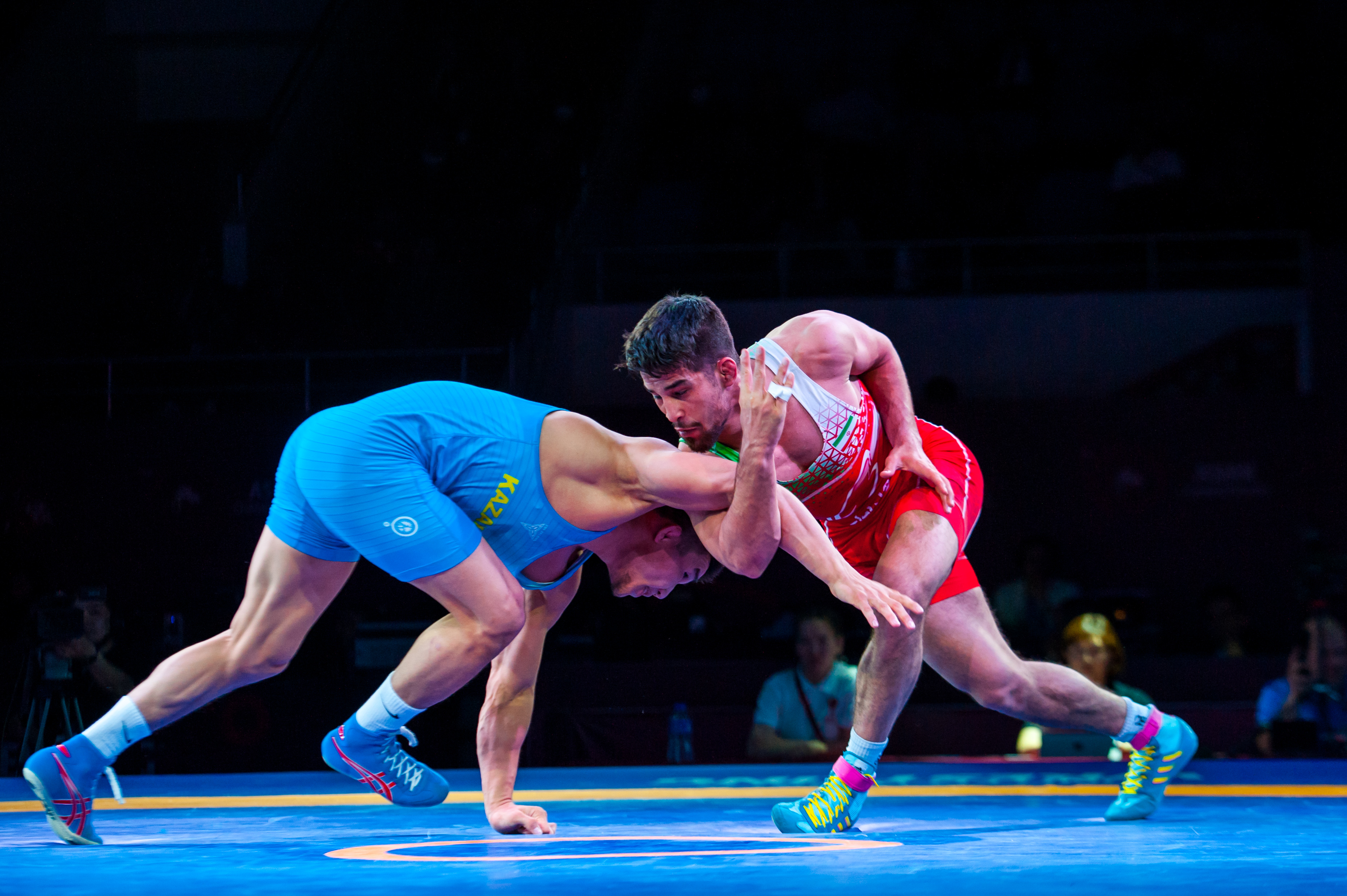 In the 74kg final, Emamichoghaei scored all five of his points in the first period, and that held up in a 5-2 victory over defending champion Nurkozha KAIPANOV (KAZ).

After gaining a point on the activity clock, Emamichoghaei put together a takedown-gut wrench combination to go ahead 5-0. In the second period, Kaipanov scored a takedown with :20 left, but it was too little, too late.

In adding the gold to his bronze at 70kg in 2019, Emamichoghaei avenged a 7-6 loss to Kaipanov in the semifinals at 70kg at the 2019 World Championships, where Kaipanov took the silver and Emamichoghaei a bronze.

The Iranian's win evened their head-to-head record at 2-2.

"I have defeated him twice now," Emamichoghaei said. "Once in Norway and now a second time. I am very happy about it. Next time I will train harder and win in a better way."

Emamichoghaei also faced a stiff test in his opening match in the quarterfinals, when he barely eked out a 7-5 win over Daichi TAKATANI (JPN).

"It was the first match," Emamichoghaei said. "If you are a wrestler, you know the first match is different from other bouts. In that, I was a little tight and didn’t do well, but I am happy that I won.

"A win is a win anyway. I’m the next tournament, I will definitely start my first match better than what I did here." 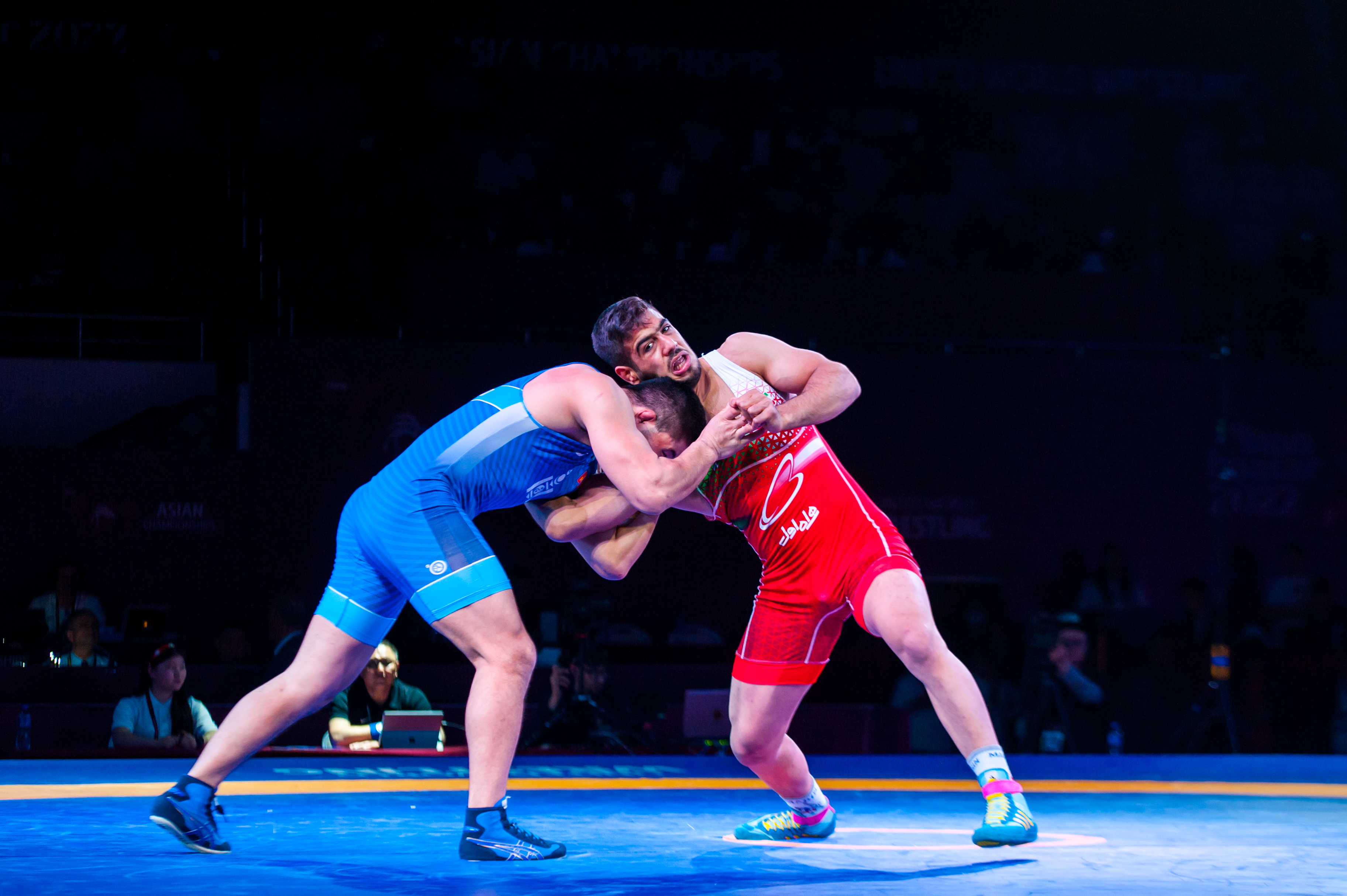 Firouzpour, the world junior champion and world U23 bronze medalist in 2021, simply overpowered Orgilokh DAGVADORJ (MGL) in the 92kg final, winning 11-0 in 4:51 for his third straight technical fall of the day, without conceding a point.

"Yes my opponents were not that strong and I was able to win easily," Firouzpour said.

Firouzpour stopped a throw attempt by the Mongolian for 2, then added three stepouts to take a 5-0 lead into the break. In the second period, he added a takedown and lace lock combination for 4, then finished up the match with a snap down takedown.

"I am happy," Firouzpour said. "Thank God that at the age of 19 I could win the gold medal of Asia. This is just the beginning. I hope to win more and more." 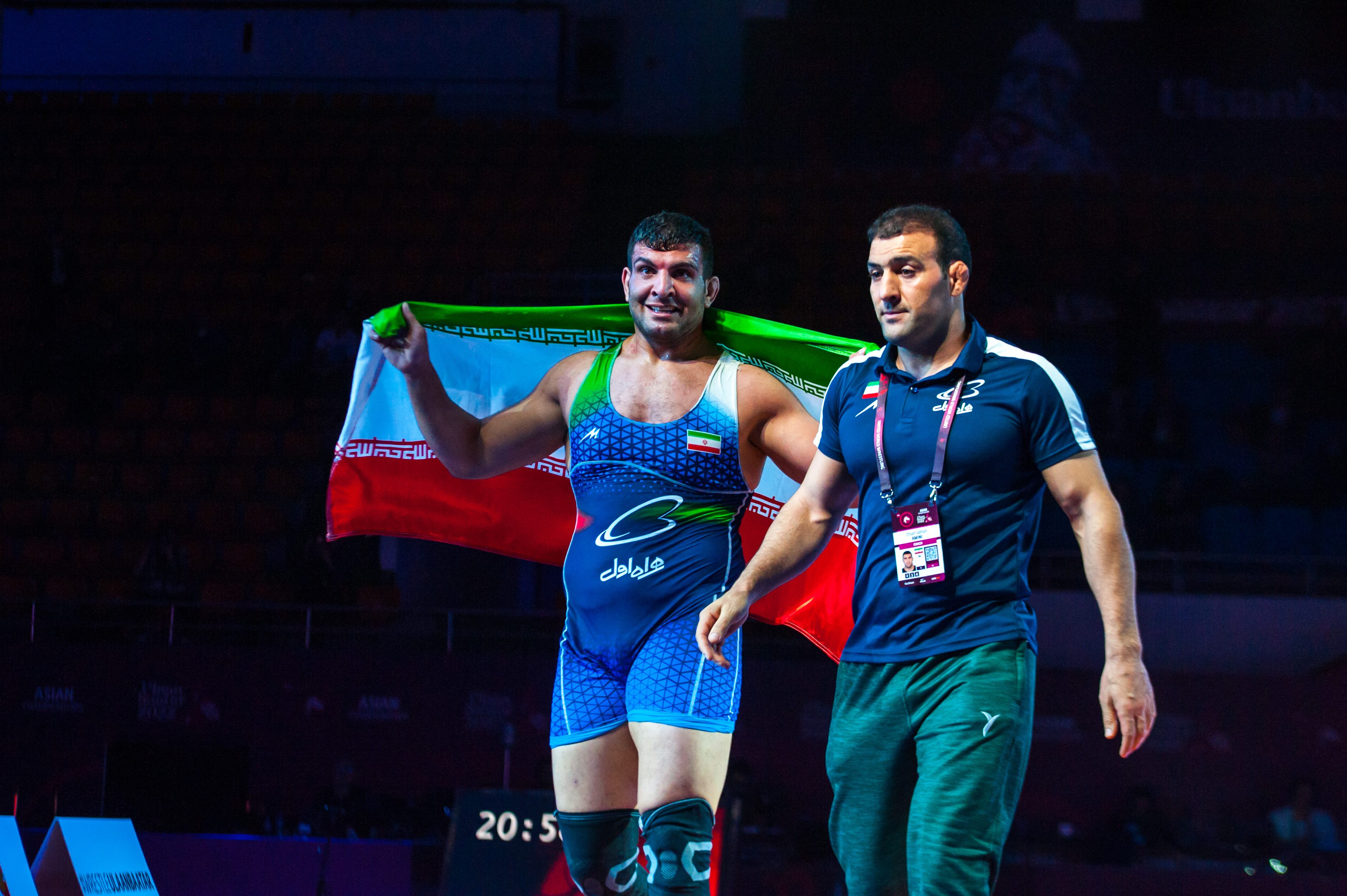 Bringing the curtain down on the tournament was Mohebi's 3-1 win over Alisher YERGALI (KAZ) in the 125kg final, which added to titles he had previously won in 2017 and 2019.

In a staid affair in which both had received activity points, Mohebi scored the decisive single-leg takedown in the second period. For Yergali, it was his fourth straight Asian medal, although none are gold. He won the previous ones at 97kg.

"After I won in Iran, I was chosen for the Asian competition," Mohebi said. "I am wrestling here for the third time and I have won all of them, so thank God. Asian competition is always important for Iran and it’s all because of God that we won this time as well in team rankings." 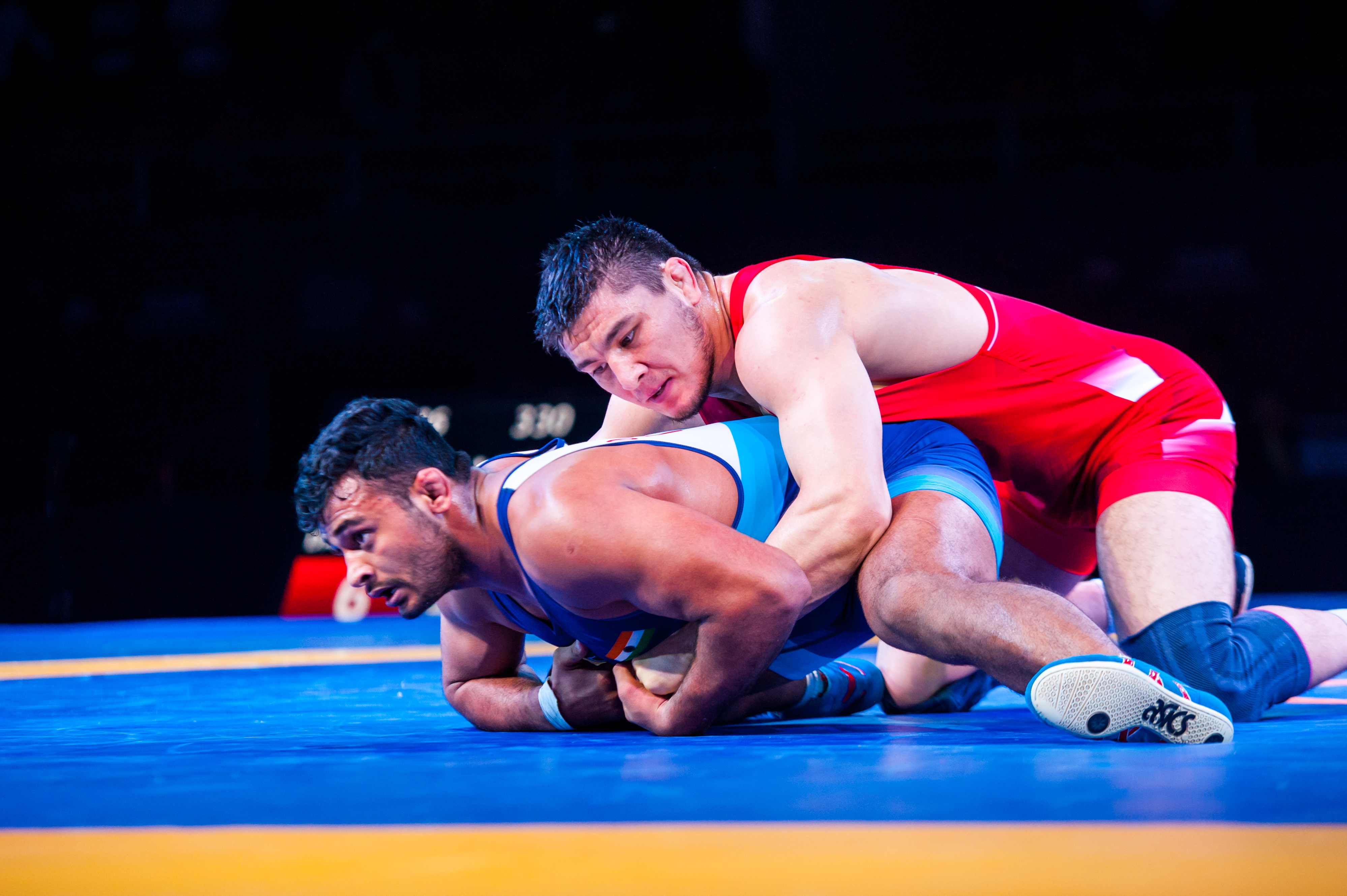 The remaining gold went to Azamat DAULETBEKOV (KAZ), who after one silver and one bronze in four previous appearances, finally made it to the top step of the podium with a solid 6-1 victory over Deepak PUNIA (IND) in the 86kg final.

"I can say that this is a big victory in my career," Dauletbekov said. "Of course I am happy. With God's will, I was honored to make Kazakhstan's anthem play and the flag be raised. I'm glad that I could protect my country's honor. I'm dedicating this victory to my mom and dad."

Dauletbekov, who was second in 2017 and third in 2018, chalked up a stepout and takedown in each period to defeat the former world junior champion Punia, who settled for the silver for the second year in a row.

The 2017 world U23 and 2014 world junior silver medalist, is looking to make his mark on the global senior stage.

"There are many good wrestlers in my weight category," Dauletbekov said. "To be a champion at all the other wrestling events, I will train as hard as possible."

In the bronze-medal matches, Yeihyun JUNG (KOR) gave Korea its lone medal of the entire championships when he caught Shatlyk HEMELYAYEV (TKM) in an early headlock and clamped down for a fall in 1:34 at 125kg.

The other match at 125kg was a doozy, made even more so by the presence and eventual victory of local favorite Batmagnai ENKHTUVSHIN (MGL). Enkhtuvshin gave the home crowd one final thrill by rallying from a 9-1 deficit to edge Sardorbek KHOLMATOV (UZB) by the un- heavyweight score of 15-12.

Both bronze-medal matches at 61kg also had thrilling finishes, with neither outcome decided until the final seconds.

Likewise, Akbar KURBANOV (KAZ) came out of a final scramble behind Alibeg ALIBEGOV (BRN), then forced him to the mat with :12 left for the winning takedown and a 5-4 win.

Mohsen MOSTAFAVI (IRI), the only Iranian who did not make the finals Sunday, will go home with a bronze after scoring three stepouts in a 4-0 win over Gwanuk KIM (KOR) at 86kg.

The other 86kg bronze went to Bobur ISLOMOV (UZB), who edged Saiakbai USUPOV (KGZ) 6-5 to deny him a second straight bronze.

At 92kg, 2020 silver medalist Takuma OTSU (JPN) was left to rue what might have been, after he got caught on his back attempting a front headlock roll while holding a 12-8 lead, and Adilet DAVLUMBAYEV (KAZ) clamped down for a fall in 5:34.

Viky CHAHAR (IND) took the other 92kg bronze, scoring two takedowns in the second period of a 5-3 victory over Ajiniyaz SAPARNIYAZOV (UZB).