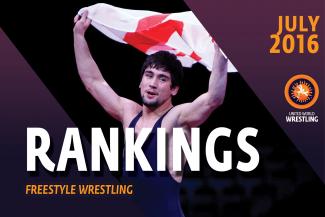 CORSIER-SUR-VEVEY (July 5) – Rio 2016 hopefuls Rei HIGUCHI (JPN) and Jayden COX (USA) make their debut in the United World Wrestling rankings for freestyle after turning in persuasive performances in June during the early run-up to the August 5-21 Olympic Games.

Higuchi won a pair of titles on Japan’s pre-Olympic tour of Europe to go from unranked to No.10 at 57kg. At the Ziolkowski International, Higuchi edged world bronze medalist Vladimir DUBOV (BUL), 4-3, in the final after running over European silver medalist Andrey YATSENKO (UKR) by technical fall in the quarterfinals.

Cox fell to European bronze medal winner Dato MARSAGISHVILI (GEO), 7-4, in the U.S.-Georgia dual meet for third place and joins the rankings at No.10. Marsagishvili, looking for a return the Olympic Games after a bronze medal at London 2012, climbs from No.12 to ninth.

All eight wrestlers at the top of the rankings hold onto to their places with only a couple of the leaders in action in June. 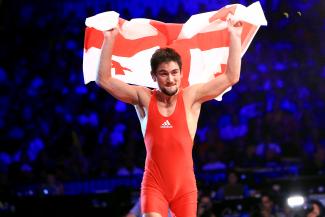 Georgia’s rankings leaders Vladimir KHINCHEGASHVILI (57kg) and Geno PETRIASHVILI (125kg) were perfect with four wins each at the World Cup, leading Georgia to the third-place trophy in Los Angeles behind Iran and Russia.

At 125kg, reigning world champ Taha AKGUL (TUR) appears to still be struggling with a leg injury and forfeited all four his bouts at the World Cup, slipping from No.2 to fourth at super heavyweight.

World champ Abdulrashid SADULAEV (RUS) racked up technical falls in four of his five bouts at 86kg to run away with the middleweight title in Poland. 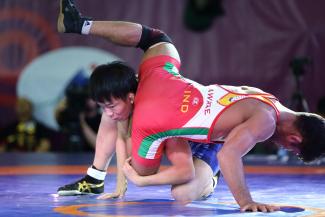 57kg – Rei HIGUCHI (JPN), headed to Rio 2016 as Asia qualifying tourney winner, bagged a pair of titles at the Macedonian Pearl and the Ziolkowski International to join the rankings at No.10. 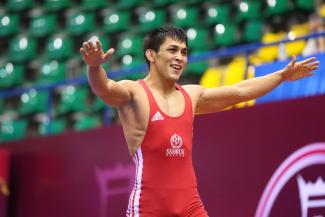 61kg – Asia champion Daulet NIYAZBEKOV (KAZ) climbs to No.2 in the rankings with a pair of technical falls to win the Ziolkowski International while European Games silver medalist Beka LOMTADZE (GEO) jumps to No.9 with three wins against one loss at the World Cup. 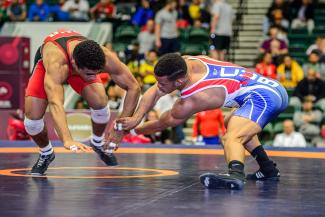 65kg – Three-time former Pan American champ Alejandro VALDES TOBIER (CUB) notched a pair of titles in June, including the Ziolkowski crown, to leap seven places to No. 11. Frank MOLINARO (USA) joins the rankings at No.18 after four wins at the World Cup. 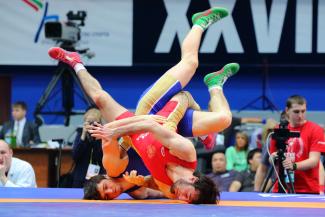 70kg – Magomedkhabib KADIMAGOMEDOV (RUS) returns to the rankings at No.16 -- after four months in rankings limbo -- with a victory at the Sargsyan International in Armenia, his first tournament triumph since the Ali Aliev tourney nearly one year ago. 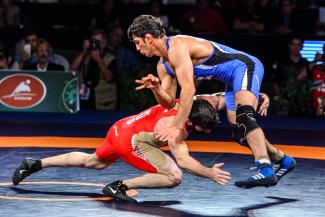 74kg – Hassan YAZDANI CHARATI (IRI) reversed a loss to Khetik TSABOLOV (RUS) in the finals of the Medved Prizes in February with a technical fall win at the World Cup to leap to No.4 in the rankings with a perfect 4-0 record in Los Angeles. 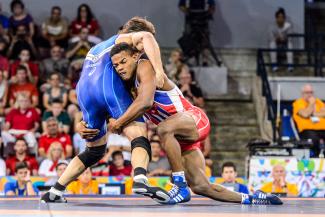 86kg – Two-time world silver medalist Reineris SALAS PEREZ (CUB) grabbed three tournament titles in June, including the Ziolkowski crown, to climb to No.4, while Jayden COX (USA) notched three wins at the World Cup in Los Angeles to debut in the rankings at No.10. 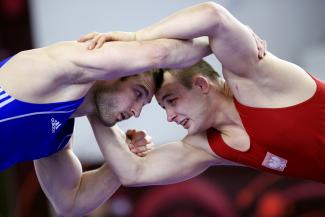 97kg – Dan Kolov winner Radoslaw BARAN (POL) grabbed a third place at the Ziolkowski International for No.7 in the rankings while Ziolkowski runner-up Nicolae CEBAN (MDA) climbed three places to No.11. 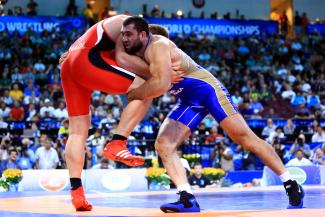 125kg – World bronze medalist Bilyal MAKHOV (RUS) climbs to No.2 in the rankings with a win at the Ziolkowski International, while Russian national champ Muhamadgazi MAGOMEDOV (RUS) debuts at No.12 in the rankings after finishing runner-up in Poland.