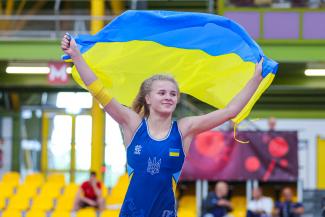 DORTMUND, Germany (July 2) --- If three gold, a silver and a bronze were not enough on Thursday, Ukraine women went a notch better and captured four gold and a silver medal on the final day of women's wrestling in Dortmund.

In a dominant show on the mat, five Ukraine wrestlers were competing for the gold medal at the junior European Championships on Friday and all but one failed to win the top medal, giving the country the team title ahead of Russia.

This is the second time that each wrestler from the Ukraine women's team has won a medal at the junior Euros, a feat they had achieved in 2008 in Kosice, Slovakia.

The night in Dortmund could not have begun better as Natalya KLIVCHUTSKA (UKR) won the gold medal with a fall against Venera NAFIKOVA (RUS) at 4:06 in the 53kg final. Two quick takedowns in the first period made it 4-0 for the Ukrainian before she used a double leg and pinned Nafikova to the mat.

Throughout the tournament, both Klivchutska and Nafikova were the best wrestlers at 53kg with the latter winning all her bouts via fall or techical superiority while the Russian showed some exceptional defence in crunch situations to pull off close wins.

The 57kg final was even quicker as Solomiia VYNNYK (UKR) gave no chance to Patrycja STRZELCZYK (POL) and claimed the gold medal in a minute and 45 seconds with a 10-0 score.

In the first 30 seconds, Vynnyk, a silver medalist at senior Euros, got a takedown and gut to lead 4-0. Then she performed a quick go behind to lead 8-0. Her unmatched speed gave her another take down and a lace made it 10-0. The Ukrainian outscored her opponents 30-2 in four bouts. 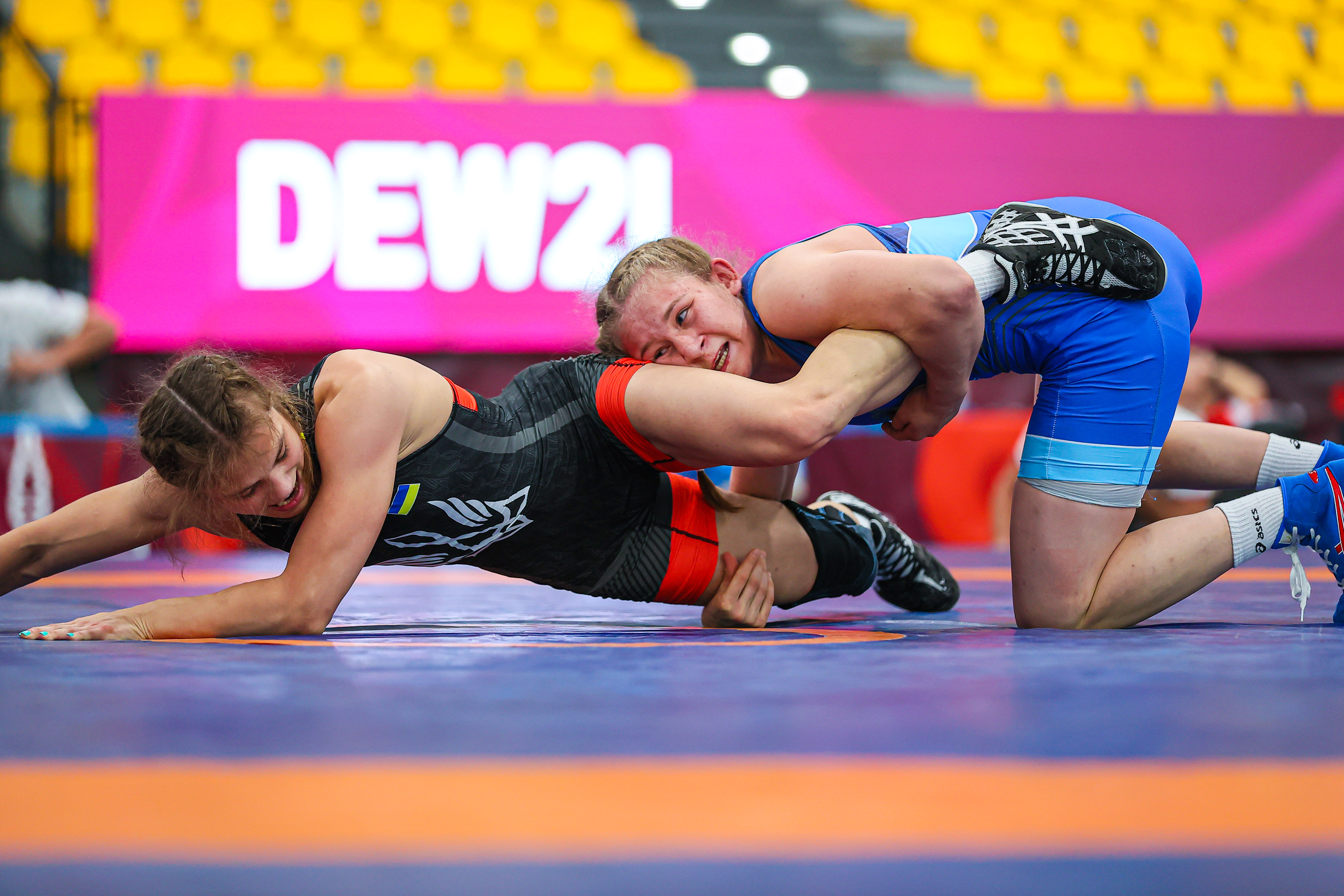 In another Ukraine-Russia final, this time it Russia which came out on top. At 62kg, Alina KASABIEVA (RUS) gave a counter-attacking masterclass to beat Kateryna ZELENYKH (UKR) 12-2.

Both exchanged takedowns early with Zelenykh, a U23 Euro silver medalist in May, leading 2-0 but Kasabieva hit back with a takedown and a leg-turk to make it 4-2, the score at the break. Zelenykh continued to hit blank attacks which gave the Russian many openings for takedowns and she completed them with ease.

In the end Kasabieva, a bronze medalist at cadet Worlds, easily secured a technical superiority win against her more accomplished wrestler. This denied Ukraine a chance to have a perfect day.

In one of the bronze medal bouts at 62kg, Iva GERIC (CRO) created history by defeating Nadzeya BULANAYA (BLR) 1-1. The win made her the first Croatian to win a medal in women's wrestling at junior Euros. 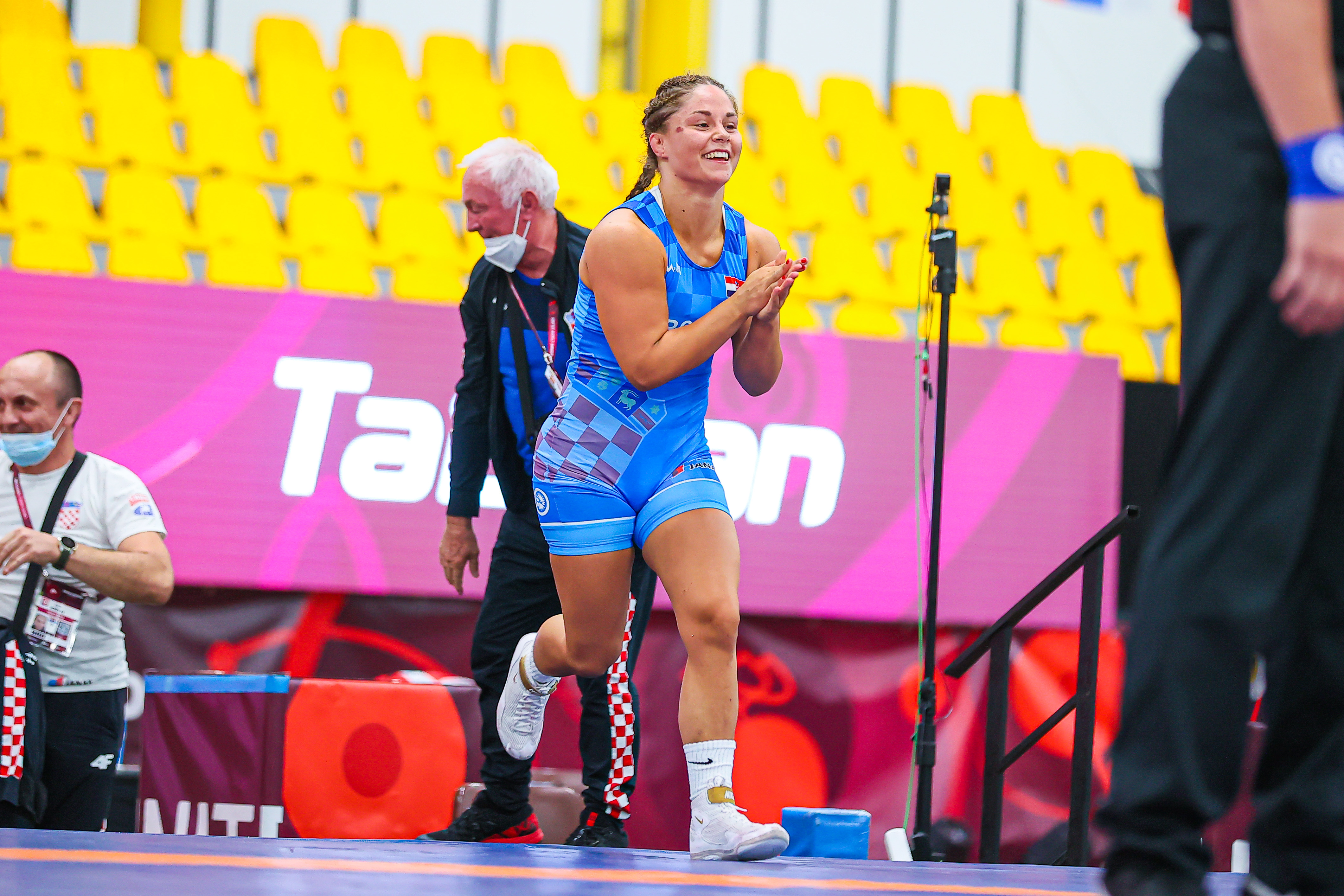 Incidentally, she was the first-ever woman wrestler from Croatia to win a medal at European Championships at any age-group. She achieved the feat in 2019 when she won a bronze medal at the cadet level in Faenza, Italy.

Manola SKOBELSKA (UKR) survived a scare at 65kg as Noemi SZABADOS (HUN) mounted a comeback from 0-8 down to make it 7-8 in the final but time ran out before she could script an stunning win.

It was a shock surrender from Skobelska as she led 8-0 at the break and gave up all seven points in the second period. She began with a takedown and caught the Hungarian in a leg lace to lead 6-0. She added two more points with another takedown.

But Szabados' efforts in the second period were not enough as she failed to get one more point for the win. But this was an improvement for her as she won her first silver medal at European Championships after winning two bronze before. 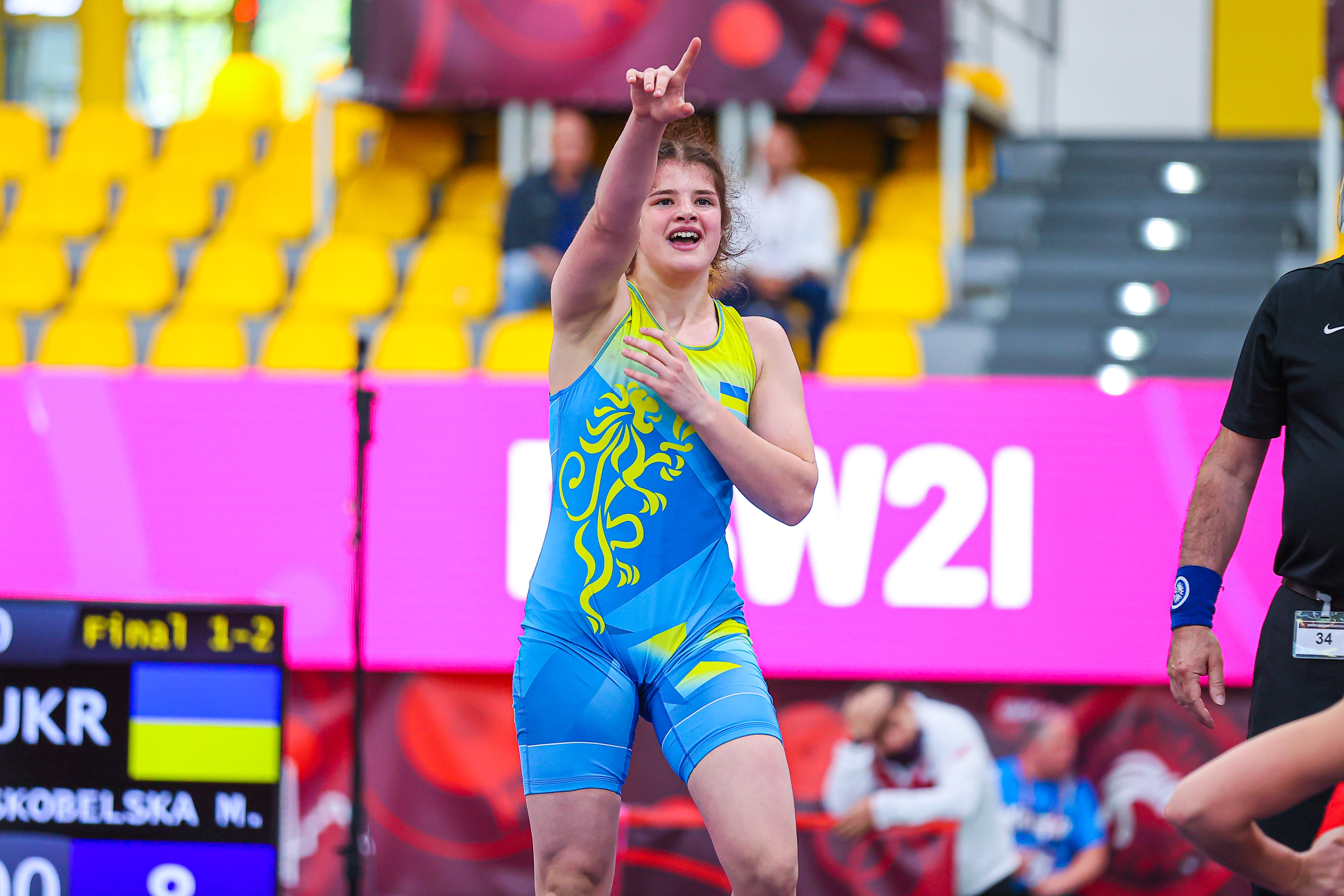 The final gold medal bout was between Anastasiya ALPYEYEVA (UKR) and Individual World Cup bronze medalist Zsuzsanna MOLNAR (SVK) but it turned out to be anti-climatic.

The Ukrainian began with an ankle pick to lead 2-0 and added a double leg takedown to make it 4-0. At the break, she was leading 6-0 against the former cadet European champion.

The second half began with a powerful double leg and Alpyeyeva exposed the Slovak to a pin. With both shoulders firmly on the mat, the referee called it a fall, giving the Ukrainian the gold in just 3:55. 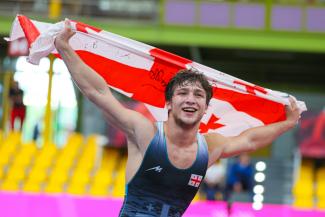 DORTMUND, Germany (July 4) --- After having subdued day at the junior European Championships on Saturday, Russia came up with two gold medal winning performances on Sunday to regain some lost ground in Dortmund, Germany.

Winning the title at 82kg and 97kg, Russia managed to climb up to the second spot in the team title race with Georgia winning the title as it won three gold and two silver. Turkey, with one gold, silver and bronze each in Dortmund, finished third.

Amirkhan TSECHOEV (RUS) was the first gold medalist for Russia as he claimed the 82kg title by beating Mykyta ALIEKSIEIEV (UKR) in the final. This was the second title for Russia for the event after Pavel REKLIN (RUS) won gold at 55kg on Saturday.

Tsechoev took the momentum in the 82kg final and was awarded a point for Alieksieiev's passivity. From the par terre position, he got two points for a throw. He was awarded two more points for another throw but Ukraine challenged tha call. Ukraine won the challenge but Russia still led 4-0.

In rush of adrenaline, Alieksiesiev went for a body lock but Tsechoev used that momentum to convert it into a four point throw. In just one minute 49 seconds, the Russian captured the gold medal with a technical superiority win.

A historic moment was witnessed at 82kg as Marcel STERKENBURG (NED) became the first ever medalist for Netherlands at the junior European Championships. He defeated Mikhail KHACHATURAU (BLR) 9-3 in a tense bronze medal bout. 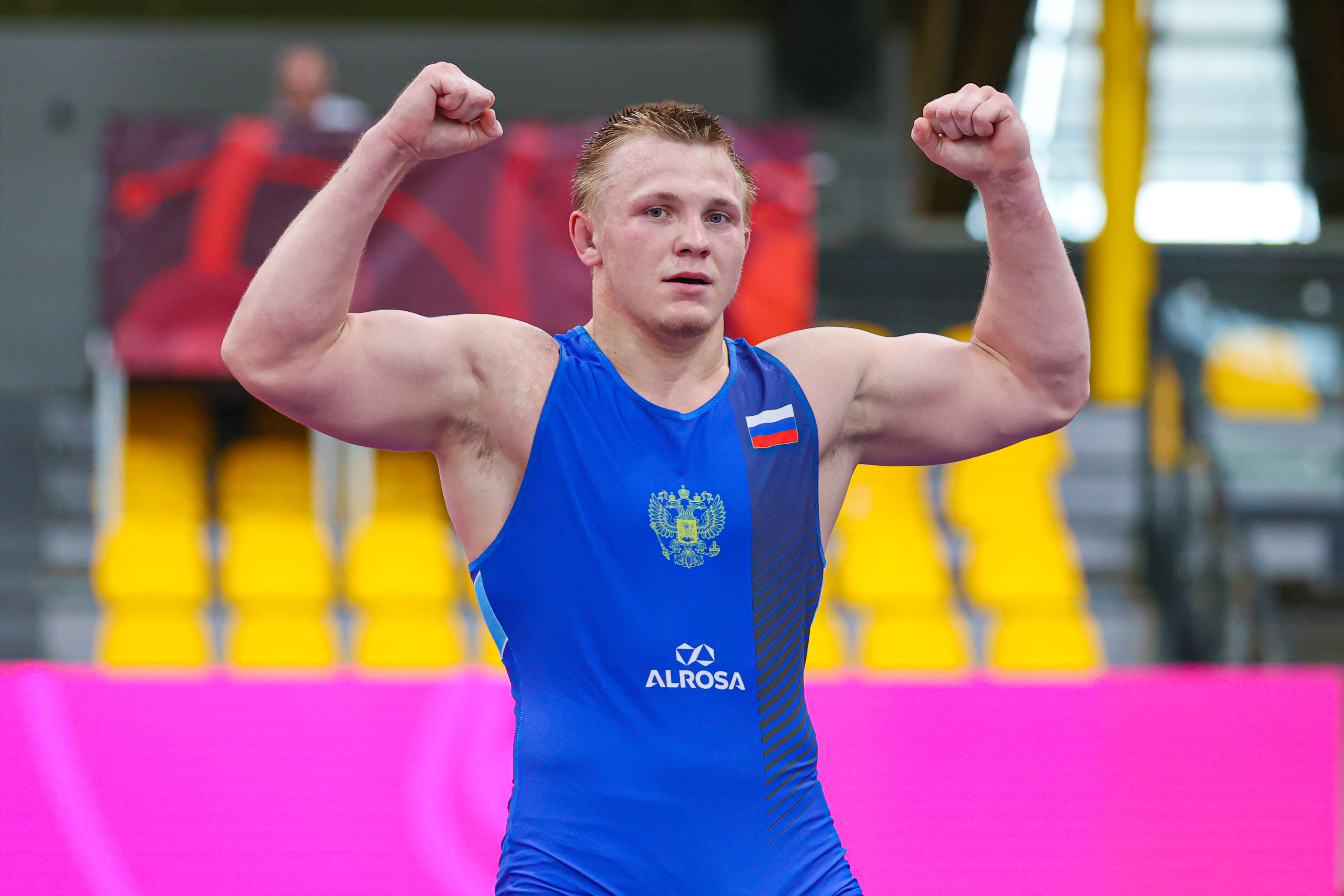 Aleksei MILESHIN (RUS) was the second Russian to win the gold medal on Sunday. He ended the hopes of local wrestler Anton VIEWEG (GER) by beating him 5-0 in the 97kg final.

Mileshin, a cadet World Championships silver medalist, got a point for Vieweg's passivity. He used a throw from par terre to increase the lead to 3-0. In the second period, he scored a takedown and hung on to the 5-0 lead to win the top medal.

In the 60kg final, Abuladze scored a come-from-behind victory over Dinislam BAMMATOV (RUS). Bammatov was leading 4-0 but Abuladze scored five unanswered points to win 5-4. A disappointed Russian expressed his displeasure at the end and even his coach showed a protest.

Bammatov used a chest wrap to gut wrench to lead 4-0. But it all changed in the second period, he was called for passivity and Abuladze scored a step out. Russia challenged the call but lost and the difference was reduced to 4-3.

After a warning, the referee cautioned Bammatov for using aggressive force on Abuladze's arm and the judges confirmed it which gave the Georgian a 5-4 lead. The clock expired at the same score.

But Abuladze's biggest win came in the semifinal when he defeated former senior European champion Edmond NAZARYAN (BUL) 3-2. The Bulgarian, a cadet world champion, was the favourite to win the title.

At 72kg, Chkhikvadze defeated Attila TOESMAGI (HUN) 4-1 in the final. The Youth Olympic Games champion led 1-0 after the Hungarian's inactivity. He added two more points with a throw from par terre.

Toesmagi, a bronze medalist at cadet Worlds, could not take advantage after the Georgian was called for inactivity. Toesmagi challenged for a leg foul but lost. The score changed to 4-1 but remained in Georgian's favour.

It only needed a passivity from Kirik as Jafarov pounced on the opportunity and combined a throw and gut to lead 4-0. It looked like Kirik would defend the next attack from the Azerbaijani but Jafarov's strength was unmatched.

He scored two more throws for four points and secured a 9-0 win in the 67kg final.