ACAPULCO, Mexico (May 5) -- Oscar PINO HINDS (CUB) could not have asked for a better return to Greco-Roman after trying his hand at freestyle for the last three years.

In 2019, he won the silver medal at the World Championships at 130kg but has since wrestled freestyle. Despite qualifying for the Tokyo Olympics, he had to vacate the 130kg spot for the four-time Olympic champion Mijain LOPEZ (CUB).

But as the new Olympic cycle begins, Pino is expected to remain at 130kg and lead Cuba's charge. He took the first steps in that direction by winning the Pan-Am gold in Acapulco, Mexico.

Outscoring his opponents 29-2 on Thursday, Pino won his fourth Pan-Am title and the first since 2018 to remain undefeated in the four editions of the competition.

A relieved Pino said he was happy to be back to his natural Greco-Roman style after trying and winning the gold only made the return sweeter.

"I am very happy," Pino said. "For 2-3 years [four] I didn't wrestle in Pan Am as last time was in Peru. But I am back to Greco-Roman and I feel good. I also became the champion on return so very good."

Meanwhile, the USA crowned four champions on the opening day of the competition taking a giant leap in defending the team title they won last year. Colombia and Honduras had a champion each. The remaining three gold medals will be decided Friday.

In his run to the final, Pino had to encounter a familiar opponent on the mat in Yasmani ACOSTA FERNANDEZ (CHI) in the quarterfinal which more or less decided Pino's position in the tournament.

Acosta, who finished fifth at the Olympics, was Cuba's second choice at 130kg and had won Pan-Am titles whenever Lopez decided to sit out. He later moved to Chile in 2016.

The two traded passivity points in either half but it was Pino's two points from par terre that made the difference in the 3-1 win.

"The match against Yasmani was the one I had to prepare more," he said. "In this competition, I had opponents from USA, Yasmani and Peru before the final and I knew to be the champion I need to have a strong gut."

He used that effectively in the final against another Tokyo Olympian Eduard SOGHOMONYAN (BRA), scoring six points from that technique in a 9-1 win to claim the gold. The final was a rematch from the 2016 Pan-Am gold-medal bout which Pino had won easily, claiming his first continental title.

Soghomonyan had upset defending champion Leo SANTANA HEREDIA (DOM) in the quarterfinals 2-1 before moving past Gino AVILA DILBERT (HON) 9-0 in the final. But he could not keep up to Pino's game in the final.

While the Pan-Am title is a strong start to the Olympic cycle for Pino, he is taking it one step at a time and focusing on the World Championships later this year in Belgrade, Serbia.

A three-time World medalist, the 28-year-old reached the final in Nursultan but suffered a close defeat at the hands of four-time world champion Riza KAYAALP (TUR). The loss is still fresh in Pino's memory but he says that he is ready to avenge that defeat and win the title.

"I am back and I will compete at the World Championships," he said. "I know I have to beat Riza [KAYAALP] to win the gold. I was close in Nursultan but did a mistake but now I am ready to win." 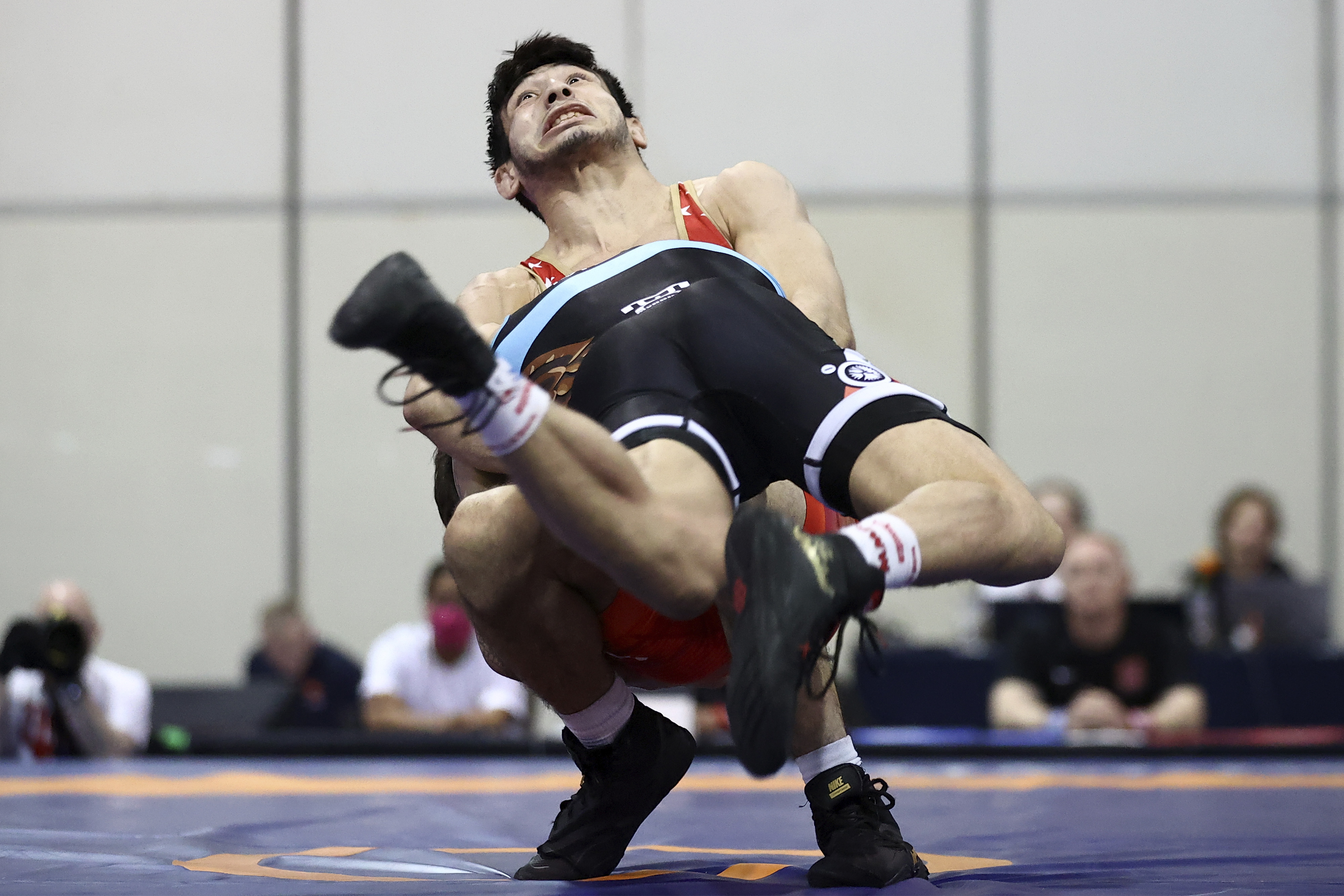 At 60kg, Samuel GURRIA VIGUERAS (MEX) had lit up the arena with his high-flying moves including in the final against Miranda but he had to settle for a silver as the USA wrestler had one extra move than him.

The two were involved in a 20-point slugfest in the final with Gurria being egged on by the vocal fans. But it was Miranda who kept the action going in the first period and was giving the advantage.

He awarded two points as Gurria tried to defend and score a reversal from par terre but committed a leg-foul. He was again put in par terre and Miranda scored four points from two chest-wrap exposures. He then had Gurria in a headlock looking to finish the bout but scored only two. He landed on his back in danger in the same motion, giving up two as well and the score read 9-2. It was initially scored four points for Gurria but the USA successfully challenged the call.

They were involved in another two-and-two situation in the second period before Gurria launched a big headlock for four. A reversal gave Miranda a 12-8 lead and it remained that till the end.

"That was a lot of points," Miranda said after the match. "He was looking to score as he was in his hometown and with that, he brought in the energy."

Miranda had suffered a loss in the final at the '21 edition but was focused enough to win it this year. Despite getting stuck in a few situations, he trusted his game plan to pull off the win, which he thought was critical.

"I think staying composed [made the difference]," he said. "I had a little bit of gameplan, not give him too many openings for him as he caught me a couple of times but that was the goal -- to not get caught."

After ascending to the top of the podium, Miranda can definitely take pride in the win, a warm-up before he enters the USA World Team Trials in June.

"I have to work on some of the stuff for the world team trials for the World Championships," he said. "But I am definitely proud of this and this means that I am training good and hard." 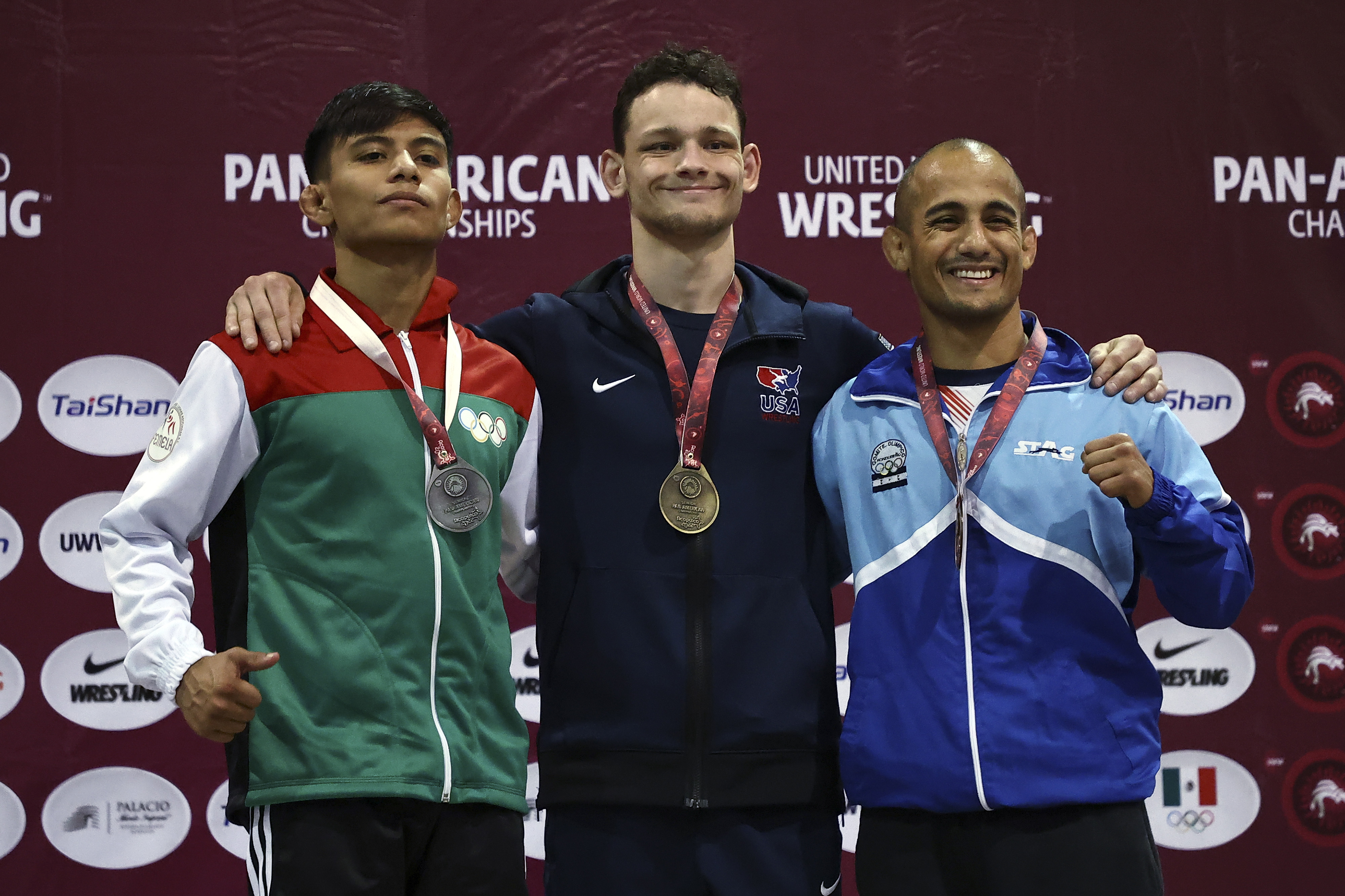 His teammate Koontz won the 55kg title with his win over Axel SALAS ESQUIVEL (MEX) in Round 2 proving to be the difference. He scored two gut-wrenches from par terre to lead 5-0 at the break and when Salas was on top in the second period, Koontz scored when Salas failed to complete a head-pinch exposure. He added a takedown to finish the bout 9-1.

At 63kg, USA's world team member Jones defeated Jose RODRIGUEZ HERNANDEZ (MEX) with 2:08 on the clock to win his first Pan-Am title. After scoring a stepout and point from passivity, he launched Rodriguez for two four-point throws from body locks to win the bout 10-0. 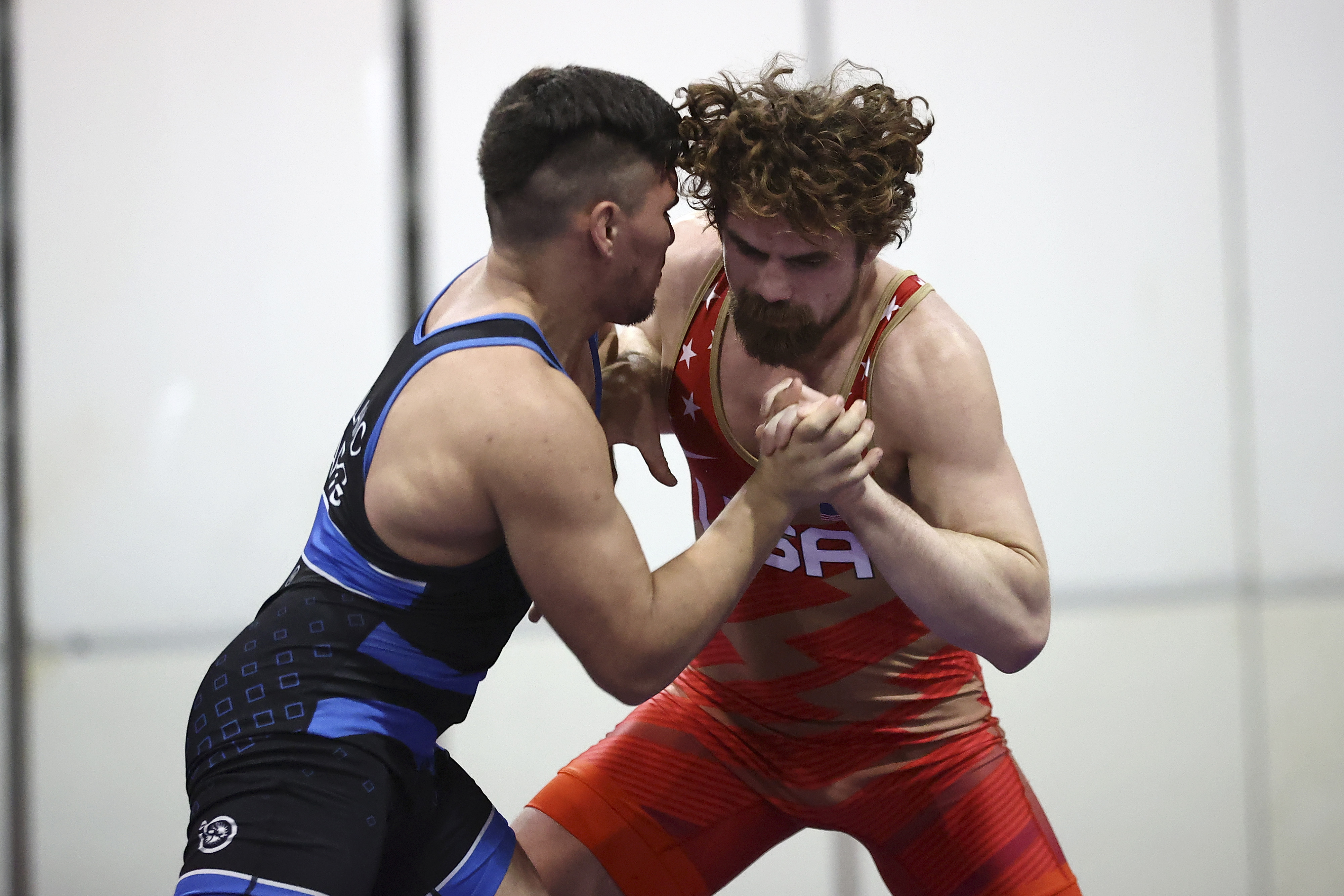 Smith was the USA's fourth gold medalist of the night as he remained undefeated in the 72kg Nordic bracket. The bout which made the difference was against Edsson OLMOS GUTIERREZ (MEX) which Smith won 4-2. This was Smith's third Pan-Am title and fifth medal overall. 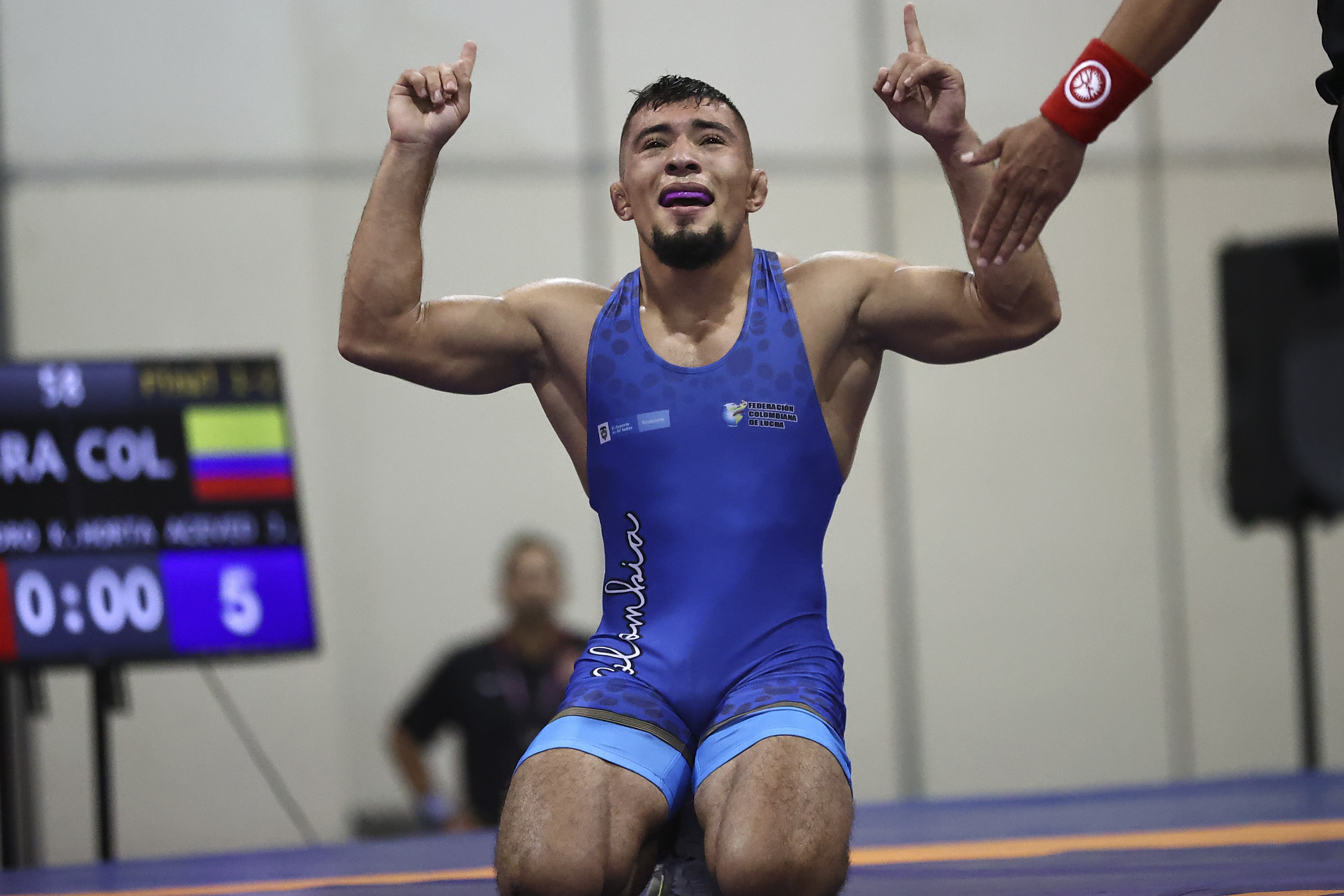 His opening action to go behind and score a takedown on the edge earned him two points before another point was added for Moraes' passivity. He scored a gut-wrench from par terre to lead 5-0 and survived the remaining time to win the gold.

"I feel proud," Horta said. "The work we are doing is good. I managed the bout tactically well to win. This was my second Pan-Am tournament for me and now I start the preparation for the Olympic cycle with the Bolivarian Games in July." 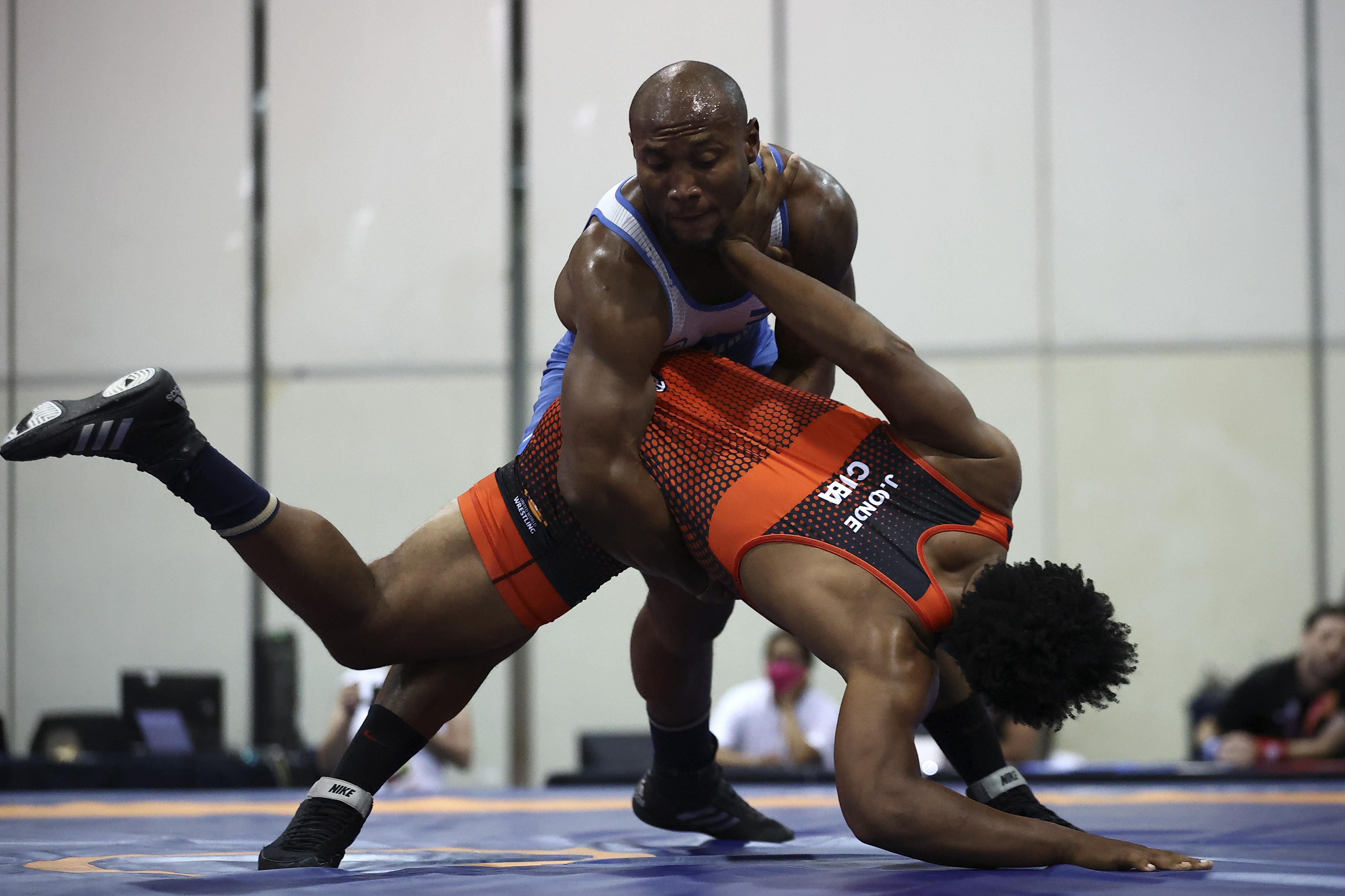 History-maker Kevin MEJIA CASTILLO (HON), who became the first wrestler from Honduras to win a Pan-Am title last year, gave himself a birthday present by defending his 97kg Pan-Am title in Acapulco. To win the gold without giving up a single point in the tournament only made it more memorable for him.

"I am really happy," Mejia said. "I never thought I will be a two-time Pan-Am champ. I thank my trainers who are always with me. Winning was hard here."

The 24-0 scoreline in his three bouts includes an 8-0 win over Juan CONDE IBANEZ (CUB) in the gold medal bout. He began with a four-point move from par terre and then scored another exposure to lead 7-0. He finished the bout in two minutes and 21 seconds with a stepout.

But to take the next step and win medals on the world stage, Mejia says that he needs better training.

"I need to prepare more [to win at Worlds]," he said. "Better training in Europe is important to have better results" 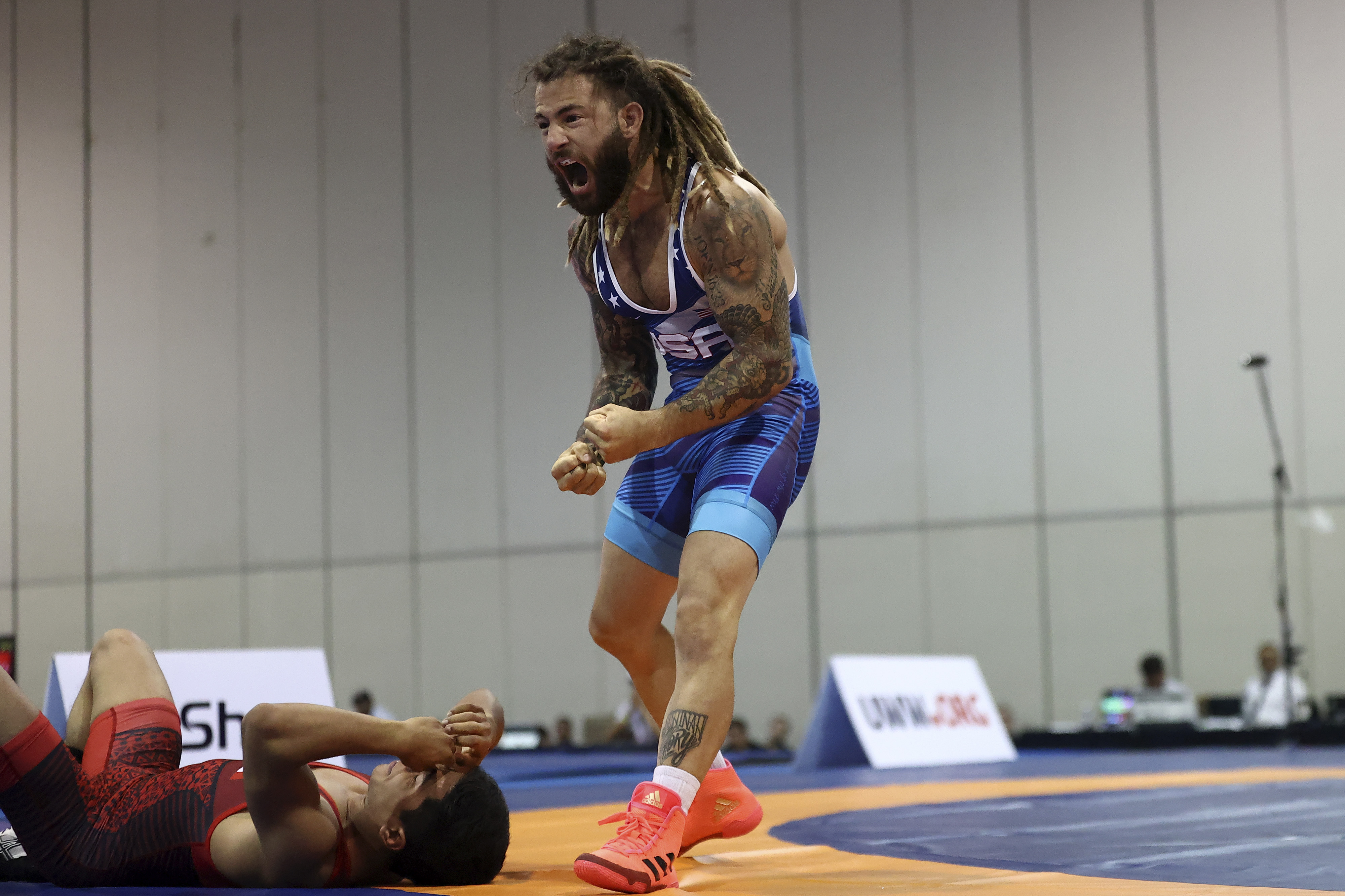