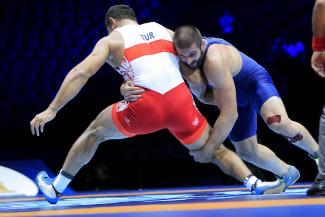 Petriashvili, a two-time world bronze medalist and a bronze medal winner at the Rio 2016 Olympic Games, won the 125kg champion’s belt with a hard-fought 10-8 victory over Akgul, who had been seeking to secure a world-level title for the fourth year in a row.

“This is incredible,” Petriashvili said after the grueling final in which the lead seesawed back-and-forth until he scored a double-leg takedown at 5:40 to nail down the victory.

“Actually, I don’t remember anything that happened in the match – I’m just exhausted,” said Petriashvili, adding “I want to thank our coaches, doctors and the others on the team. We’re all a family; we’re all brothers.”

Petriashvili had already defeated Akgul before – 8-8, on his way to the 2016 European crown, but was thumped in this year’s continental meet in May by technical fall, 14-4, as the Turkish champion reclaimed his European crown. 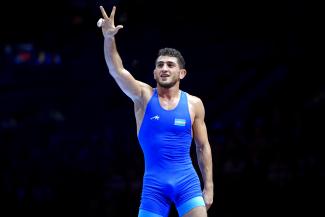 While Akgul was not able to win his third world title, Haji ALIEV (AZE), who won world titles 2013 and 2015, nailed down his third at 61kg with a demolition of 2016 European champion Gadshimurad RASHIDOV (RUS) with a fall at 5:30.

Rashidov had been the focus of attention at 61kg since he had to navigate a quadrant that included defending champion Logan STEIBER (USA), world and Olympic Games champion Vladimir KHINCHEGASHVILI (GEO), and Cengizhan ERDOGAN (TUR), a three-time European champion for Russia formerly known as Opan SAT. 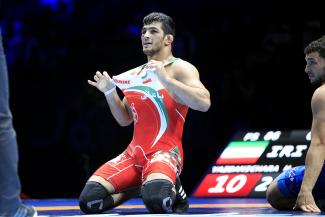 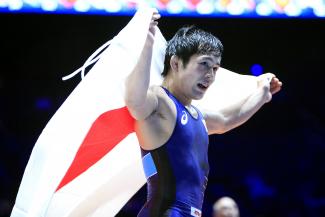 Takahashi’s win and an earlier triumph by Kenichiro FUMITA (59kg) in Greco-Roman, along with four champions in the women’s events, makes Japan the first country at the Paris championships to win gold medals in all three of wrestling’s Olympic Games disciplines.

Meanwhile, in the bronze medal matches at 57kg, Andriy YATSENKO (UKR) had a defense for everything JONG Hak-Jin (PRK) threw at him to fashion a 12-2 technical fall. Las Vegas 2015 bronze medalist ERDENEBAT Bekhbayar (MGL) kept 2013 world silver medalist Vladimir DUBOV (BUL) off balance as a forged a 9-2 win.

At 61kg, Khinchegashvili scored off a low single-leg attack in the first period and held on for a 3-0 win over Erdogan. Yowlys BONNE RODRIGUEZ (CUB) converted a single-leg attack to a takedown and then wrapped up a head-and-leg pinning combination for the fall at 2:35.

At 86kg, Vladislav VALIEV (RUS) scored with a knee pick to close the first period and held on for a  3-1 win over Aleksander GOSTIEV (AZE). J’den COX (USA) scored three takedowns in the second period to secure an 8-0 over Mihail GANEV (BUL).

Championship wrestling concludes Saturday with action in the 65, 70, 74 and 97kg freestyle categories