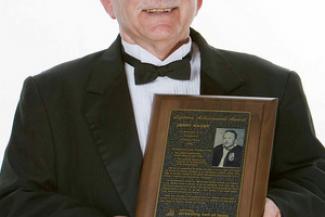 Jerry was born in Toledo, Ohio in 1937 and earned his Bachelor's Degree from the University of Toledo in 1959. He met and married Sheila George in 1958 and they moved west to Las Vegas Nevada in the early 1960's. Jerry and Sheila had recently returned to Michigan to be close to family.

Jerry is remembered as an esteemed coach and official of Olympic Freestyle and Greco/Roman wrestling. His career spanned more than 35 years; from conference champion wrestler at the University of Toledo in the 1950's, to coach of an unprecedented seven US World Champion wrestling teams in the 1980's - including the first ever US team to win a Greco/Roman World Championship in 1987, to over 30 years as an official for high school, college and international wrestling. Jerry's passion for sports in general and wrestling above all influenced his entire life, and he in turn influenced and inspired countless others with his persistent pursuit of excellence as a coach and official.

Jerry has garnered many honors throughout his long wrestling career. He was honored as one of FILA's most respected officials with the FILA Gold Star in 1977 and inducted into University of Toledo Sports Hall of Fame 2003, the Nevada Wrestling Hall of Fame in 2007, and the National Wrestling Hall of Fame in 2008. Along with these honors, Jerry cherished his USA Wrestling Gold Coach award, and the recognition he achieved for his teams as Coach of the Las Vegas YMCA wrestling program through the 1970's.

While wrestling was Jerry's first passion, he also had an abiding love of the outdoors. He spent college summers working in Yellowstone National Park and was a long time supporter of our National Parks. He brought his love of sports and the outdoors to his work as a Las Vegas juvenile corrections officer and created programs that offered positive experiences and ongoing support for the young men in his care.

Jerry is survived by his wife Sheila, with whom he shared 56 years of marriage, his sister Nancy (Ridout), his sons Marc and Lance, and their families.

Although an outstanding competitor and coach in his own right, Jerry Wager has earned the highest accolades as an international wrestling official. Since 1962, he has been licensed by FILA to referee in freestyle and Greco-Roman competition.

From 1962-1998, he officiated in more than 50 major international meets including the Pan American Championships, European Championships, Junior World and World freestyle and Greco-Roman Championships. He was selected to referee the 1980 Olympic Games, however, out of respect to U.S. athletes forced to boycott, he did not participate.

Three years later, he was the first American to be named a mat chairman for the Greco-Roman World Championships in Norway. He has been a FILA clinician in the United States, Cuba, Dominican Republic and Panama. For his achievements, FILA granted him a Lifetime Exceptionelle rating, the highest category granted to international officials, as well as two of its most prestigious awards, the bronze medal and the gold medal for his dedication and service to wrestling.

Wager also officiated on the collegiate level from 1960-63, working meets in the Big 10 and Mid-America conferences, and from 1963-66 at the prep level as head official for Southern Nevada High Schools.

A very successful youth coach, Wager served as head coach of seven consecutive U.S. teams that traveled to the World Championships in various age divisions. He coached his Las Vegas YMCA team in 26 national championships. Four of his wrestlers won World championships five times. He was honored as national “Coach of the Year” in 1978 and was one of USA Wrestling’s first two coaches to reach Gold certification.