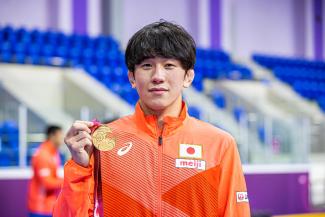 The highly anticipated third clash of the Asian 65kg titans never made it to the mat, and after receiving an injury default from rival Bajrang PUNIA (IND), Takuto OTOGURO (JPN) said he would love for the match to happen this summer in Tokyo.

Former world champion Otoguro repeated as 65kg champion at the Asian Championships when Punia pulled out of the final due to an elbow injury suffered during his semifinal match earlier Saturday in Almaty.

"It feels weird to not wrestle," said Punia, for whom the silver becomes the sixth Asian medal of his career. "This is the first time ever I have said no to a bout internationally against a person from another country. It feels bad."

Ravi KUMAR (IND) also retained his Asian crown when he defeated Alireza SARLAK (IRI) 9-4 in the 57kg final, as the five golds up for grabs went to wrestlers from five different nations on Day 5 of the six-day tournament in the empty Baluan Sholak Palace of Culture and Sports.

Otoguro, who was competing for the first time since his victory over Punia in the final at last year's Asian Championships in New Delhi, was disappointed that the match with the Indian star was aborted, but accepted that injuries are part and parcel to the sport.

"A final with Bajrang is always an interesting match, and I was really looking forward to it," Otoguro said. "He also wrestles hard and has his share of injuries. It can't be helped.

"I look forward to having a match at the Tokyo Olympics."

The two had first met in the final at the 2018 World Championships in Budapest, where a then-19-year-old Otoguro came out on top in a wild 16-9 victory that made him the youngest freestyle world champion in Japan history.

Otoguro, who graduated from Yamanashi Gakuin University in March, said he was able to continue training for the most part, as Yamanashi Prefecture, north of Tokyo, was not hard-hit by the coronavirus. "At the very least, I could run in the mountains," he said.

He participated in sporadically scheduled national team training camps, and then prepared for Almaty as a new member of the sports division of the Japan Self-Defense Forces, into which he was inducted in March. His older brother Keisuke, who will compete tomorrow at 74kg, is also a member.

Asked about being in what is regarded as the most competitive weight class, Otoguro responded, "I'm happy that I can fight in the weight class with the highest level. I welcome the challenge of beating them."

In the 57kg final, Kumar outlasted Sarlak for a victory that left the Iranian in tears after they kept trading scoring moves, but Kumar's were for bigger points.

"The feeling to be a champion again is unexplainable," Kumar said. "It has been long. I lost one tournament last year so it’s great to be back on top position," he said, referring to a loss by fall at the World Cup in Serbia.

In the first period, Kumar interspersed a takedown and 2-point barrel roll with three stepouts by Sarlak for a 4-3 lead. The two exchanged stepouts to start the second period, before the 2019 world bronze medalist pulled away with two takedowns in the last 1:15.

"The Iran wrestler was really good, but this was my first bout with him so I was keeping it normal," he said. "I wasn’t trying to do too much."

The surprise of the finals came at 79kg, where Byungmin GONG (KOR) edged 2020 bronze medalist Ali SAVADKOUHI (IRI) 5-3, scoring a takedown with 11 seconds left for his third straight close win of the competition.

"Korean freestyle wrestling has not been so good in the past couple of years and I am happy to change that to a certain extent with this gold medal," said Gong, a 2018 Asian Games bronze medalist at 74kg. "I am happy to be part of this tradition."

In the final, Savadkouhi was going behind when Gong clamped down on his arm and turned him over for 2, after which the Iranian finished off his move for a 1-point reversal.

In the second period, Savadkouhi looked to have clinched the victory when he came out of a flurry in control for 2 with :16 left, only to be caught in a double-leg tackle that allowed Gong to snatch victory from the jaws of defeat.

"Regardless of who the opponent is, I always go into the bout to beat them," said Gong, whose combined margin of victory in his three matches was three points (he won his semifinal 5-5).

"[My coaches and I] developed a strategy that whatever happens, keep calm," he said. "Play it safe but don't back down. Play cool, calm and collective."

Gong already has his next challenge lined up -- dropping to 74kg to enter the final Olympic qualifying tournament in Sofia next month.

"I am not going to lie, it is going to be hard in 74kg at Sofia. But I just want to wrestle hard and adapt to the situation whenever it arises. I think that is the best I can do."

For Savadkouhi, the 2019 Asian U-23 champion, all that is left is to reflect on what might have been. "I can't believe the mistakes I made in the final," he said. "I was not able to win the gold and it pains me."

In contrast to Gong's tight path to gold, Ali SHABANIBENGAR (IRI) was totally dominant at 97kg, steamrolling 2020 bronze medalist Alisher YERGALI (KAZ) 12-2 in the final for his third technical fall in three matches.

Shabanigengar got a stepout late in the first period to take a 3-2 lead into the second, but opened the floodgates with a 4-point ankle pick that he followed with a 2-point gut wrench.

An unsuccessful challenge added a point, which provided the necessary margin of difference when he dumped Yergali during a single-leg takedown to end the match at 3:44.

"Thank God that I got a gold medal at the Asian Championships, and I thank God that I could defeat my opponent so dominantly," said Shabanibengar, a 2018 world U-23 bronze medalist.

The host nation earned the other gold of the night, when two-time world junior medalist Syrbaz TALGAT (KAZ) scored four points in the second period of an 6-2 victory over Sirojiddin KHASANOV (UZB) in an at-times tempestuous 70kg final.

Khasanov had a 2-2 lead on criteria after the first period, but got a takedown and two stepouts -- after the second one, Khasanov gave him a little shove to the head -- to add the Asian senior title to the junior one he won in 2019.

"I am really happy to win the competition since we are hosting at home," Talgat said. "I felt the responsibility to win at home.

"All of my opponents were prepared and were tough, so to win gold against them was a good thing. Most of my opponents had already competed at the senior level, but for me it was the first time."

Yadav last brought home hardware in 2015, when he won world and Asian bronze medals at 74kg. Yadav, who placed 13th at the London 2012 Olympics, won the Asian title back in 2010.

Saiakbai USUPOV (KGZ) returned to the medal podium for the first time since 2016, again to receive a bronze, when he rolled to a 10-0 technical fall over Galymzhan USSERBAYEV (KAZ) in the other third-place match at 79kg.

Yuto TAKESHITA (JPN) extended Japan's run of bronze medalists at 57kg to four straight years, posting a solid 7-0 victory over Muhammad BILAL (PAK). Takeshita followed in the footsteps of 2017 world and Asian champion Yuki TAKAHASHI (JPN), who had back-to-back third-place finishes in 2019 and 2020, and Tomohiro HASEGAWA (JPN), a bronze medalist in 2018.

Morteza GHIASI CHEKA (IRI), one of the group of up-and-coming wrestlers dispatched by Iran for international seasoning, added a bronze medal to the Middle East powerhouse's tally with victory by fall over Nodir RAKHIMOV (UZB).

Ghiasi Cheka had levered Rakhimov to his back to go up 7-0 when the Uzbek called it a day with 10 seconds left.

Satywart KADIAN (IND), a silver medalist at 97kg a year ago, captured his third career Asian bronze, and he couldn't have cut any closer. He scored the winning takedown at the buzzer, and with an unsuccessful challenge point added, came away with a 5-2 win over Minwon SEO (KOR).

The other bronzes went to: Nodirjon SAFAROV (UZB) at 57kg, Yongseok JEONG (KOR) at 65kg, Islambek OROZBEKOV (KGZ) and Karan MOR (IND) at 70kg, and Takashi ISHIGURO (JPN) at 97kg.

The tournament wraps up Sunday with competition in the other five weight classes in freestyle, 61g, 74kg, 86kg, 92kg and 125kg.

Featured is the return of world and Olympic champion Hassan YAZDANI (IRI) to the Asian Championships at 86kg for the first time since 2018, when he won the gold in his lone appearance.