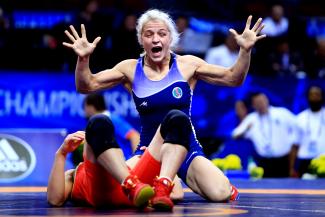 Co-Favorites: Mariya STADNIK (AZE) comes to Rio 2016 seeking a gold medal to complete her set of Olympic Games “souvenirs” after a bronze at Beijing 2008 and a silver from London 2012.

In Las Vegas, Stadnik grabbed a 2-0 lead after passivity calls on Tosaka in the 48kg final, but surrendered a takedown off a low single-leg attack in the closing seconds for a 2-2 victory, 3-2 after a challenge, for Tosaka.

Looking “invincible” after Las Vegas, Tosaka was stunned at the Asian championships in February by SUN Yanan (CHN), 5-4, on a late flurry and challenge in the semifinals. Tosaka owns a 5-1 win over Sun in the finals of the Incheon 2014 Asian Games.

Challengers: SUN Yanan (CHN), 23, won the UWW Test Event in Rio de Janeiro in January to kick off 2016 before taking the Asian championship crown with the win over Tosaka. Sun won the 2013 world title at 51kg over ERDENECHIMEG Sumiya (MGL), who is entered at 53kg for Rio 2016.

Elitsa YANKOVA (BUL), 21, since winning the junior world title in 2013, has earned a silver medal at the European Games and a bronze medal in Riga. She qualified in Zrenjanin (SRB) with a 6-2 win over former world silver medalist Maryna MARKEVICH (BLR). 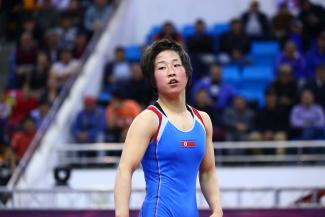 Dark Horses: Veteran Jyldyz ESHIMOVA (KAZ) made the drop from 53kg to 48kg for the Asian qualifier and has victories in this year’s Medved Prizes in Minsk and the German Grand Prix.

KIM Hyon-Gyong (PRK), 21, won a bronze medal at her world championships debut in 2014 and recorded four one-sided wins at the Ulaanbaatar qualifier for her ticket to Rio 2016.

Icho Goes for Four in Rio, Challengers Line Up to Take Best Shot

Despite these numbers, Icho, lost by technical fall to PUREVDORJ Orkhon (MGL) at the Yarygin Grand Prix in January -- Icho’s first loss on the mat since March 2003.

Icho, 32, retooled and returned to action at the Poland Open in June with three wins, including a win by fall over world and Olympic Games bronze medalist Yulia RATKEVICH (AZE) in the semifinals. 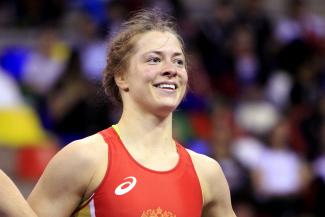 Challengers: Valerie KOBLOVA-ZHOLOBOVA (RUS), who owns a World Cup win over Saori YOSHIDA (JPN) in 2012, was world silver medalist to Icho in 2014, but suffered a leg injury in the middle of 2015. She returned for the “last chance” Rio 2016 qualifier in Istanbul.

Petra OLLI (FIN) was world runner-up to Icho in Las Vegas, but has been the gold standard at the non-Olympic category of 60kg the last two years, winning the European crown in Riga with an 8-2 victory over 60kg world champion Oksana HERHEL (UKR) in the final. 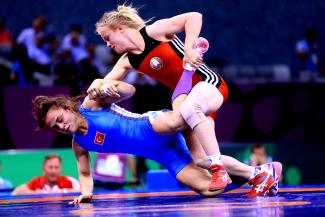 Favorite: London 2012 gold medalist Natalia VOROBIEVA (RUS), 25, won her first world championship title in Las Vegas after a silver medal in 2013 and a bronze medal the following year in Tashkent.

In Las Vegas, Vorobieva appeared focused and determined as she recorded four falls, including back-to-back falls over Aline FOCKEN (GER) and ZHOU Feng (CHN) in the semifinals and championship.

In January, however, Vorobieva suffered a loss to Dorothy YEATS (CAN) at the UWW Test Event and, in her final tune-up last month, was toppled, 5-3, by Jenny FRANSSON (SWE) in Madrid

Zhou, 22, finished 11th at 69kg in her debut at the senior world championships in 2014, but rebounded two weeks later with a gold medal at 75kg at the Incheon 2014 Asian Games with a win over London 2012 bronze medalist Gouzel MANYUROVA (KAZ).

2014 world champion Aline FOCKEN (GER), 25, won bronze medals at the European Games and world championships in 2015 and has bagged gold in three events this year, including the German Grand Prix with a 6-1 win over Jenny FRANSSON (SWE).

World bronze medalist Sara DOSHO (JPN), 21, has won three medals this Olympic cycle – but is still in the hunt for gold. Yet, already in her young career, Dosho owns a pair of wins over Vorobieva – in the 2014 World Cup final and in the 2014 world championship semifinals. 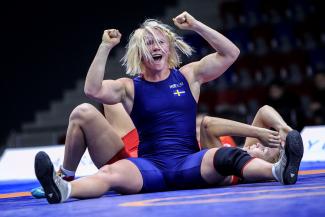 Dark Horses: 2012 world champion Jenny FRANSSON (SWE) has finished in fifth place at the last two world championship, but takes heart from triumphs at the Poland Open and the Grand Prix of Spain.

Silver Collector: Ilana KRATYSH (ISR) is Israel’s first entry in women’s wrestling at the Olympic Games and the first in wrestling since Athens 2004. And, if the judoka-turned-wrestler is successful at becoming Israel’s first Olympic Games medalist, it could very well be silver.  Kratysh has been silver medalist at the European championships the last four years to three different opponents.