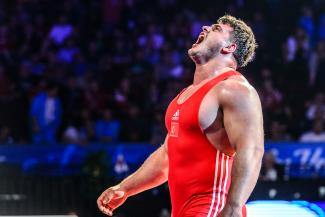 Favorite: Zhan BELENYUK (UKR) avenged a 2014 loss to Saman TAHMASEBI (AZE) in the Las Vegas semifinals and went on to win his first world championship crown.

The 25-year-old Belenyuk, who targets Ukraine’s first Olympic Games medal in Greco-Roman in 20 years, also owns a pair of European championship titles and was runner-up to David CHAKVETADZE (RUS) at the 2015 European Games in Baku.

Challengers: Saman TAHMASEBI (AZE) has been a fixture on the world championship medals podium this Olympic cycle with a pair of silver medals (2013, 2014) and a bronze in Las Vegas.

This will be Tahmasebi’s third Olympic Games, finishing 11th at Beijing 2008 for Iran and 11th again at London 2012 for Azerbaijan.

David CHAKVETADZE (RUS) defeated Belenyuk, 3-2, for the 2015 European Games gold medal, but fell to 10th in Las Vegas following an 8-0 loss to Tahmasebi in the quarterfinals.

Chakvetadze also pinned Belenyuk off a counter-throw at the Golden Grand Prix Final in November, but most recently lost to Viktor Lorincz, 1-0, at the Grand Prix of Spain in July.

Viktor LORINCZ (HUN), who won bronze medals at the 2013 and 2014 world championships, got off to a slow start this year with a seventh place in Riga, but came back with a bronze medal in Poland and the win in Spain. 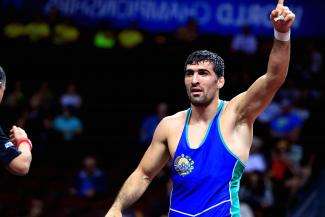 Dark Horse: World silver medalist Rustam ASSAKALOV (UZB), 32, unleashed a wicked headlock for three falls in Las Vegas for his best-ever finish at the world championships. In 2016, Assakalov has fifth-place finishes at the Poddubny tourney in January and Pytlasinski in June.

Missing (Mishin) in Action: Athens 2004 champ Alexej MISHIN (RUS), still a fan favorite -- at 37, qualified Russia at middleweight with wins over 2014 world champ Melonin NOUMONVI (FRA) and European U23 winner Denis KUDLA (GER) in Zrenjanin. He finished second to 23-year-old Chakvatadze at Russian nationals, however, and will not likely be seen at Carioca Arena 2.

Co-Favorites: Mijain LOPEZ NUNEZ (CUB), 34, won gold medals at Beijing 2008 and London 2012 and is poised to put his name in the record books as only the third Greco-Roman wrestler to win gold medals in three Olympic Games.

A victory in Rio will also give him an eighth world-level title and rank him second among Greco-Roman wrestlers at the Olympic Games -- second only to Alexander KARELIN (RUS) with three Olympic gold medals and nine world championship titles.

Lopez won his fifth world title in 2014 but came up a point short to Riza KAYAALP (TUR) in the 130kg final in Las Vegas. In an even bout, Kayaalp earned a point for the third passivity call against Lopez and made it stand for a 1-0 victory. 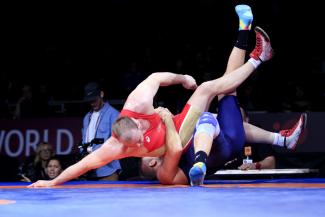 Challengers: World bronze medalist Alexander CHERNETSKI (UKR) has lost only one bout in 2016, coming in the championship final with Kayaalp in Riga. He has victories at the Ukraine International in February and the Trophee Milone in May.

London 2012 bronze medal winner Johan Magnus EUREN (SWE) continues to recover from a leg injury that sidelined him in 2015. He still managed to earn a bronze medal in Riga, losing only to Kayaalp in the semifinals. 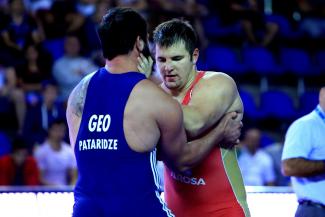