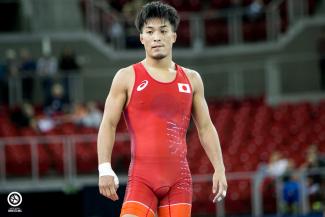 Ota reached the finals handling Olympic bronze medalist Stig-Andre BERGE (NOR), 6-1 in the quarterfinals. Ota and Berg's Hungarian Grand Prix quarterfinals bout was their second meeting since 2016. Their first match came in the quarterfinal round match at the 2016 Olympic Games in Rio de Janeiro, where Ota won 4-0.

Ota will wrestle China's fifth-ranked Tuo Erbatu in the 63kg gold-medal bout. Tuo upset the 2018 world bronze medalist WALIHAN Sailike (CHN), 7-3 in the quarterfinals. Walihan won his world bronze medal down at 60kg, where he's currently ranked No. 3 in the world. Tuo then rolled into the finals thumping America's Travis RICE (USA), 9-0 in the semifinals.

Ota and Tuo's Saturday night matchup will be their first career meeting. 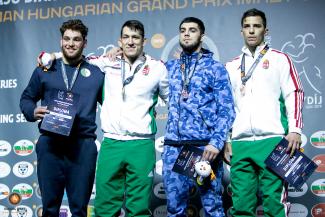 GYOR, Hungary (February 24) - Viktor LORINCZ (HUN) picked up his second Ranking Series title of the year with a 6-0 shutout victory over Algeria's Ivan LIZATOVIC in the 87kg Hungarian Open finals, and catapulted the host nation to the top of the leaderboard, five points above Iran, who led after the first nine weight classes.

In the finals, the Hungarian exposed his Algerian opponent twice with a pair of gut wrenches after the Lizatovic was dinged for passivity, and owned the 5-0 lead. A second period step out gave Lorincz the 6-0 advantage and his second Ranking Series gold of the season. The Hungarian also had a title-winning performance at the Zagreb Open two weeks ago.

Lorincz is quietly building a case to be looked at as one of the most dominate Greco-Roman wrestlers in the world after the first two Ranking Series events. Lorincz has an undefeated 9-0 record this season and has scored six shutout victories while outscoring his opponents 45-8.

Meanwhile, Korea’s KIM Seunghak and RYU Hansu collected a pair of gold medals on final day of wrestling, joining Georgia as the only nation to win more than one gold medal.

Ryu, Korea’s two-time world champion, had no trouble scoring the 8-1 victory over Ruslan KUDRYNETS (UKR) in the 67kg gold-medal bout.

Ryu smothered Kudrynets in the opening period, scoring all eight of his points. The Korean wrestler scored four points on a front head pinch/lift then tacked on an additional four points, transitioning from a takedown to a gut wrench, and commanded the 8-1 lead heading into the second period.

Ryu took the match and the 72kg gold medal with an 8-1 victory after a scoreless second period.

Kim Seunghak was the second Korean wrestler to claim a gold medal on the final day of wrestling at the Olimpia Sportpark in Gyor, Hungary. Kim won the 60kg gold medal after his finals opponent Firuz TUKHTAEV (UZB) forfeited out of the finals match.