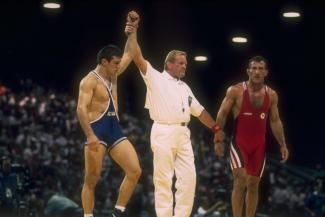 In 2000, freestyle wrestler Magomed Ibragimov became the first-ever Olympic medalist for the nation of Macedonia. The Olympic Channel looked back on Ibragimov's historic achievement and life-changing impact.

The Sydney 2000 Games will always hold a special significance for North Macedonia.

Wrestler Magomed Ibragimov not only won his first Olympic medal but it still stands as the only Olympic medal the Balkan nation has registered.

Ibragimov was born in Dagestan Autonomous Soviet Socialist Republic and is of Avar descent which is one of the largest ethnic groups in Dagestan. He started freestyle wrestling, which was a popular sport in the region, in 1986.

Heading into the Atlanta 1996 Games, Ibragimov represented Azerbaijan and was considered a favourite for a medal after he won gold at both the 1995 and 1996 European Championships. But he would only finish fifth in the 82kg category.

However, following on from his performance at Atlanta 1996, Ibragimov would go on to represent F.Y.R Macedonia.