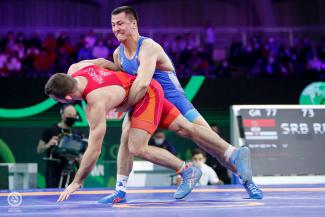 Vlasov, a two-time Olympic champion, advanced to the 77kg finals with a 2-1 semifinal victory Viktor NEMES (SRB) in a battle of world champions. Vlasov scored a passivity in the first. Nemes came back to take the criteria lead off a passivity before Vlasov retook the lead with a passivity and held on for the win

He will meet European silver medalist Zoltan LEVAI (HUN) in the 77kg finals. Levai edged Yasaf ZEINALOV (UKR) 1-1 on criteria in the semifinals. The Hungarian scored the first point off a passivity to go up 1-0. Levai scored a passivity point of his own in the second period to take the criteria lead, which would prove to be the difference in the match.

Chakvetadze dominated 2017 world bronze medalist Hossein NOURI (IRI) 7-0 in the semifinals at 87kg. The Russian Olympic gold medalist used a four-point throw to go up 5-0 in the first period. He added two step outs in the final period while shutting down Nouri.

Opposing Chakvetadze in the 87kg finals will be Kiryl MASKEVICH (BLR), who rolled to a technical superiority over Zurabi DATUNASHVILI (SRB) in the semifinals. Maskevich led 4-3 at the break before pulling away in the second period on the strength of a four-point throw.

The 22-year-old Sefershaev moved into the 55kg finals with a 9-0 technical superiority over Balbai DORDOKOV (KGZ). Sefershaev scored an early takedown to go up 2-0. He extended his lead to 3-0 with a passivity point. Late the in period, Sefershaev scored two points off an arm throw before finishing the match with a four-point throw. Earlier in the day, Sefershaev knocked off 2018 world champion Eldaniz AZIZLI (AZE).

Sefershaev will meet Serif KILIC (TUR) for the gold medal. Kilic, a silver medalist at the Zagreb Open last month, was dominant in claiming a 10-0 technical superiority in one minute over Artiom DELEANU (MDA) in the semifinals. He scored a four-point move early in the match, and then used a gut wrench to go up 6-0 before finishing the match with another four-point throw.

Abdullaev turned in an impressive showing on the opening day. After starting his tournament with a victory over Roman PACURKOWSKI (POL), Abdullaev handled Rio Olympic champion Davor STEFANEK (SRB) 7-1 in the quarterfinals. After the match, Stefanek left his shoes on the mat, signifying his retirement from the sport after 17 years on the senior level.

In the semifinals, Abdullaev cruised to a 9-0 technical superiority over Khalmurat IBRAGIMOV (KGZ) in the semifinals. Abdullaev led 2-0 at the break before opening up the scoring in the second period to end the match early.

In the second semifinal at 67kg, Islambek DADOV (AZE) advanced to the finals with an 8-2 win over Artur POLITAIEV (UKR). Dadov led 1-0 at the break and then extended his lead to 4-0 in the second period. Politaiev cut the deficit to 4-2 late in the match before trying a desperation move in the closing moments, giving Dadov four points and a six-point victory.

Korpasi won a hard-fought match, 3-1, over Aik MNATSAKANIAN (BUL) in a battle of multiple-time world medalists. The 33-year-old Hungarian scored the only point of the opening period off a passivity. In the second period, Mnatsakanian scored his first point off a passivity to take the criteria lead. Mnatsakanian then attempted a gut wrench but Korpasi countered and scored two points to take the 3-1 lead in what turned out to be the final scoring sequence of the match.

Amoyan shut out Cengiz ARSLAN (TUR) 7-0 in the second semifinal at 72kg. Amoyan raced out to a 5-0 lead on the strength of a four-point throw in the opening period. He added a takedown in the second period to win by seven.