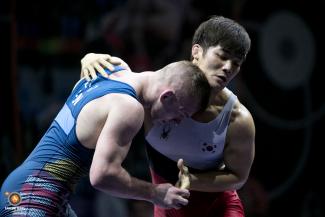 Azizli Remains Top-Ranked Wrestler at 55kg
Eldaniz Azizli comes in as the No.1 seed at 55kg. The Azeri has a resounding 30-point lead over second-ranked Ilkhom BAKHROMOV (UZB) and has the luxury of sitting out of the Oleg Karavaev and still keeping his top spot.

Bakhromov has the narrow six-point lead over Budapest world runner-up Zholaman SHARSHENBEKOV (KGZ), and a nine-point lead over fourth-ranked Ekrem OZTURK (TUR). But this may not matter because there are only two athletes entered into the Oleg Karavaev at 55kg and neither are within striking distance of earning a seed for Nur-Sultan World Championships.

If the entry list stays the same, this weight won't change before September, leaving the potential semifinals matchup between Azizli and Ozturk on the top side, and Bakhromov and Sharshenbekov on the bottom side.

Emelin Holds Criteria over Ciobanu, Will be No. 1 Seed at 60kg
Sergey Emelin and Victor CIOBANU (MDA) traded golds at the World and European Championships and could meet each other in another gold-medal match if the rankings hold through the World Championships.

Emlin, the first ranked wrestler at 60kg, holds an 18-point advantage over the man who upset him in the European finals, Vicotr Ciobanu, but the Russian holds criteria and has locked up the top seed because of it.

KIM Seunghak (KOR) climbed to the third spot in the latest rankings and established himself as a credible threat to win a 60kg medal at the world championships after winning back-to-back Ranking Series titles. Earlier this year, Kim won the Hungarian Grand Prix, then won the Sassari City Matteo Pellicone Memorial last month.

Ivan LIZATOVIC (CRO) is ranked fourth in the world at 60kg and only sits four points behind Kim. But Kazakhstan's 11th ranked Aidos SULTANGALI sits 17 points behind Lizatovic and will wrestle at the final Ranking Series event. He'd need a gold medal in a weight class with greater than 20 athletes to earn the 18 points he needs to overthrow Lizatovic for the fourth spot.

Top Three at 63kg Locked in For Nur-Sultan
Reigning world champion Stepan Maryanyan's record has remained unblemished since he won the world title in Budapest. He's since won the Dan Kolov - Nikola Petrov Tournament and the European Championships and has cemented his spot at the top of the 63kg weight class with 80 Ranking Series points.

The two wrestlers right behind him, Elmurat TASMURADOV (UZB) and TUO Erbatu (CHN), have also locked up their top-four seed, but only six points separate the two. Tasmuradov, who got hurt at the Asian Championships, holds a six-point lead over Tuo.

Slavik GALSTYAN (ARM) is ranked fourth in the world at 63kg, 22 points behind Tuo. Galstyan still has some work to do if he hopes to lock up a seed at Worlds. Thirty-three wrestlers can still catch him, and one of the wrestlers looking to steal a spot is 22nd ranked Shinobu OTA (JPN). Ota is entered into the Oleg Kavaraev and needs 15 to take over the fourth spot from the Armenian.

Surkov Stands at No. 1 at 67kg
Defending world champion Artem Surkov has a 30-point advantage over second-ranked RYU Hansu (KOR) and will sit out of the Oleg Kavaraev because he's locked up the No. 1 seed.

But Korea's Ryu only has a three-point cushion over Poland's third-ranked Gevorg SAHAKYAN and Kazahkstan's Meiirzhan SHERMAKHANBET.

From there, six wrestlers can claim a seed, but only two of them will wrestle at the Oleg Kavaraev, and they both happen to be from Japan. Tsuchika SHIMOYAMADA and Shogo TAKAHASHI, who are ranked ninth and tenth respectively, are tied with 28 points.

Since they are the only two top-ten ranked wrestlers entered into the final Ranking Series event, if more than 20 wrestlers show up in their bracket and either win a gold medal, they could jump inside the top-three just before the World Championships.

Mnatsakanian Moves to No. 1 After Staebler Dropping Down to 67kg
Germany's Frank STAEBLER has been making his way down to the Olympic weight of 67kg since winning his third world title in Budapest and will be forfeiting his top-ranked at 72kg. Aik MNATSAKANIAN (BUL) will be the beneficiary of the German wrestler's move. After he moves up to No. 1, and with no ranked wrestlers entered into the Oleg Kavaraev, the other top-three seeded wrestlers at the World Championships will be Balint KORPASI (HUN), Abuiazid MANTSIGOV (RUS), and Tarek Aziz BENAISSA (ALG), respectively.

Kim Remains Lone Non-European No.1-Ranked Wrestler
Korea's London Olympic champion Kim Hyeonwoo is the lone non-European wrestler to hold the world's No. 1 ranking. Kim won the Asian Championships and the Sassari City Matteo Pellicone Memorial, while also finishing with bronze medals at the Zagreb Open and Hungarian Grand Prix. His 87 points are 26 more than second-ranked Viktor NEMES (SRB), which means he'll be the top-seeded wrestler at 77kg when the World Championships roll around.

Nemes has a one-point lead over reigning world champion Aleksandr CHEKHIRKIN (RUS), though it's not clear if Russia will go with Chekhirkin or two-time Olympic champion Roman VLASOV (RUS), who won the European title at this weight.

Hungary's Tamas LORINCZ is the fourth-ranked wrestler and is only in danger of losing his seed to Kamal BEY (USA), but since the American failed to make the world team, Lorincz should be safe not competing in Belarus.

Kus' European Bronze Pushes Him Past Bacsi Who Recently Retired
Emrah KUS (TUR) and Peter BACSI (HUN) are ranked first and second respectively heading into July, but since Bacsi has announced his retirement, Saeid Morad ABDVALI (IRI) will move into to the second slot come September.

Viktar SASUNOUSKI (BLR) is the fourth-ranked wrestler, but that's likely to change because two top-eight wrestlers who are close enough to steal the fourth seed will wrestle in Belarus.

Reigning European champion Rajbek BISULTANOV (DEN) is three points away from Sasunouski, and Asian bronze medalist Maxat YEREZHEPOV (KAZ), who is seven points from the Belarusian, are both aiming for gold at the Oleg Karavaev.

87kg Seeds Set Heading into Oleg Karavaev
The seeds at 87kg for the World Championships are set in stone. The reason being, Hungary has two wrestlers in the top-four and can only enter one of them into the World Championships. In addition to that, there's only one unseeded wrestler who can jump into the top four, but he'll receive a bump because of the two seeded Hungarians.

Reigning European champion Zhan Beleniuk will be first. Turkey's two-time world champion Metehan BASAR will follow him in the second spot. Hungary will most likely go with fourth-ranked Viktor LORINCZ, who has defeated third-ranked Erik SZILVASSY three times this year. This means Lorincz will be the third-seeded wrestler, with Islam ABBASOV (AZE) moving into the fourth slot.

Evloev Enters Nur-Sultan No. 1 at 97kg
You can lock in Musa Evloev, Kiril MILOV (BUL), and Tracy HANCOCK (USA) to the top three seeds at 97kg for the World Championships. They've built enough points to sit out of the final Ranking Series event and still sit in the top three.

The remaining top-four ranked wrestler who hasn't locked up his spot is Mahdi ALIYARIFEIZABADI (IRI). Aliyarifeizabadi sits in fourth with 39 points. There are still seven wrestlers, none of which are entered into the Oleg Karavaev, that could pass him if they were to show up. Of those seven wrestlers that can catch Aliyarifeizabadi, four of them sit within nine points. That means, a medal at the Oleg Kavaraev would steal the spot from the Iranian.

When it comes to the fourth-ranking, KIM Minseok (KOR) holds the spot as of now. Though it's unlikely to happen because there are only eight wrestlers entered into the Oleg Kavaraev, Muminjon ABDULLAEV (UZB) can still overtake the Korean with a gold-medal performance in a bracket with 20+ wrestlers. 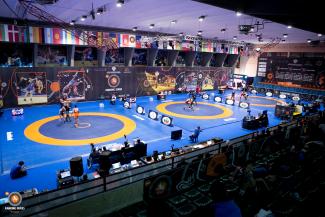