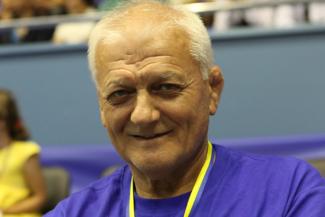 Corsier-Sur-Vevey, SWITZERLAND (October 14) – Well-known wrestling coach and educator Oleg SAZANOV of Ukraine has died. He was 76.

Mr. Sazanov was born in Lviv, Ukraine in 1938 and helped establish the Lviv Female Wrestling School. His wrestling school and the wrestlers it produced were known worldwide, producing more than 80 medals across a variety of weight categories and age divisions.

“We are saddened to hear of the loss of Mr. Sazanov,” said United World Wrestling president Nenad Lalovic. “His effort and foresight in promoting female wrestling and coaching some of the best athletes in the sport will stand as a proud legacy.”

Mr. Sazanov was responsible for helping to create the Ukrainian training system used for female wrestlers. The development included an education from the school of physical culture and was proven effective under his management.