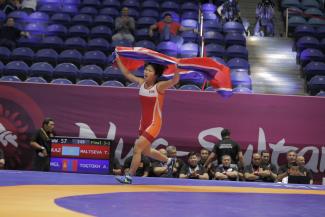 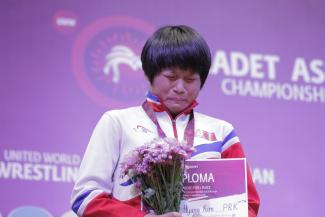 The North Korean side was boosted by recent assistance they received from United World Wrestling's developmental program "Technical Assistance for Competitions." The program allowed for three young athletes to compete in the championships and also stay for an additional week to attend the "More than Medal" Asia.

"We are very happy to see such positive results," said Deqa Niamkey, UWW Director for Development. "Wrestling deserves to be represented by every nation and to see the joy on these athletes faces means we are on track." 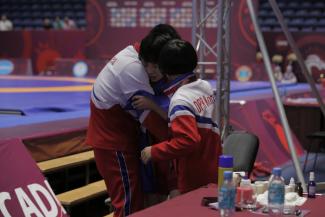 Prior to this year, North Korea had not won a medal at the Cadet Asian Championships in women's wrestling since 2016 when MyongGyong WON captured a gold medal at 40kg and UnHui HWANG claimed a silver at 43kg. 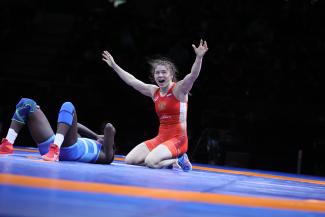 SOFIA, Bulgaria (May 7) -- Veronika CHUMIKOVA (RUS) was on her way to becoming the lone Russian to fail to qualify her weight class for the upcoming Olympics. Instead, she will be on her way to Tokyo as part of a full contingent thanks to a dramatic late victory.

Chumikova dug out of a six-point hole against Grace BULLEN (NOR) with a nifty lateral drop that led to a fall in the final minute of their thrilling 57kg semifinal at the final world Olympic qualifying tournament on Friday night in Sofia, Bulgaria.

Chumikova's win, combined with one-sided victories by Olga KHOROSHAVTSEVA (RUS) at 53kg and Liubov OVCHAROVA (RUS) at 62kg, means that Russia has joined Olympic host Japan, China and the United States -- and moments earlier, Mongolia -- in fielding a full team in all six women's weight classes at the Tokyo Games.

"It's one of the happiest days for the Russian team as the whole team is going to the Olympics," Ovcharova said of the feat, which came a day after the men filled their final opening in freestyle.

Mongolia joined the elite group thanks to a second miraculous victory of the tournament by Bolortuya KHURELKHUU (MGL), who filled her country's lone remaining open spot at 62kg.

"I am very happy and it's a great job for my Mongolia to qualify six out of six," Khurelkhuu said. "I will train hard and win in Tokyo."

Ecuador earned its lone Olympic place in any style from Lucia YEPEZ (ECU) at 50kg, as the South American nation was among 10 different countries that grabbed the berths that went to the two semifinal winners in each weight class at the last-chance tournament.

On a night of high drama, the clash between Chumikova, the newly crowned European champion at 59kg, and 2020 European gold medalist Bullen was of Olympic quality and intensity.

After Bullen came out firing and gained a quick stepout, Chumikova used an effective fireman's carry for a pair of takedowns and a 4-1 lead going into the second period.

But Bullen, who moved to Norway as a South Sudanese refugee at age four, showed her resilience and determination by coming back with a driving takedown, a pair of two-point gut wrenches and a four-point back trip to go ahead 12-6.

With time running out, Chumikova nailed a perfectly timed lateral drop to slam Bullen onto her back. Bullen bridged desperately, but Chumikova, who still trailed 12-10, pressed down and secured the fall at 5:28.

"The last period my coach just said that to trust myself and believe it doesn't matter if I am losing 6-12," a tearful Chumikova said. "I managed to perform the technique I had never done before.

"For me this is a huge moment to qualify for the Olympics. I missed the Russian Championships but I hope all the mistakes I did here will help me. I had a lot of emotions in the semifinals and I knew this is the reward if I win. This is unbelievable and that's why I am crying."

A similar scenario played out a short time later at 62kg, when Asian silver medalist Khurelkhuu fell behind 9-1 against European bronze medalist Veranika IVANOVA (BLR), who had a pair of four-point moves in the first period.

In the second period, Khurelkhuu scored a takedown and 2-point exposure to cut the gap before applying a chicken wing to turn Ivanova over and win by fall at 4:44.

"I was losing during the bout, but before it I had only promised myself to win," Khurelkhuu said. "So I was just looking for a win despite the score being 1-9. That's why I got it by pin."

It was deja vu all over again for Khurelkhuu, who used the same technique in the quarterfinals to vanquish Nathaly GRIMAN (VEN) after trailing 6-1.

In the other 62kg semifinal, Russia's Ovcharova cruised to an 8-0 victory over Luisa NIEMESCH (GER). Ovcharova, a 2020 European and 2019 world bronze medalist at 59kg, opened with a four-point back suplex, to which she added a 2-point roll, then topped with a second-period takedown.

"It was not easy at all for me because at the European [qualifier] I was able to win only one bout," Ovcharova said. "But my coaches believed in me. The Olympics is the dream of every athlete and I achieved mine today.

"The life of an athlete is not too long and we have only one chance to win and we can't miss it."

Andreea ANA (ROU) added to the drama -- unfortunately in a spectator-less Arena Armeec Sport Hall -- when she pulled off a last-second 4-2 victory over Samantha STEWART (CAN) at 53kg.

After the two traded first-period takedowns, Ana, a European bronze medalist at 55kg, trailed on last-point criteria when she caught Stewart with a driving double-leg takedown with just five seconds remaining to steal the victory.

"This was my dream and I am so happy to achieve it," said Ana, a two-time world U23 bronze medalist. "I hope I will fight good at the Olympics."

European champion Khoroshavteva got the Russian juggernaut going in the second semifinal at 53kg, when she overwhelmed Betzabeth ARGUELLO (VEN) by 11-0 technical fall.

Khoroshavtseva, a 2019 world bronze medalist at 55kg, scored the majority of her points on counters to Arguello's attacks, which could not pierce the Russian's defenses.

At 76kg, revenge was on the menu and it tasted sweet for 2018 world silver medalist Yasemin ADAR (TUR) when she cruised to a 10-1 victory over 2019 European silver medalist Martina KUENZ (AUT).

Last month, Kuenz knocked Adar out of the European Olympic qualifying tournament in Budapest with a late fall in the quarterfinals. This time, Adar had the upper hand, and put the match away in the second period with a takedown and three rolls off a lace lock.

"I am very proud of myself and the whole team," Adar said. "In Budapest, we had a problem that my coach was COVID positive and could not come and I missed him in the corner. I thought there was something missing. I was not 100 percent there. In this bout he was here and I am so proud."

In the other 76kg semifinal, Alla BELINSKA (UKR) gave Ukraine its fifth Olympic women's ticket when she outclassed Maria ACOSTA (VEN) 8-0 in the final match of the session.

Belinska, this year's European champion at 72kg, scored a driving takedown and two stepouts in the first period, then added a pair of takedowns in the second to deny Venezuela its last chance for a women's Olympic berth.

India will now have four women in Tokyo thanks to a solid effort from Asian bronze medalist Seema BISLA (IND), who edged Anna LUKASIAK (POL) 2-1 at 50kg.

Bisla scored a shrug-by takedown just moments after giving up an activity point, and that accounted for all of the scoring as she held on for the victory.

"This bout was very tough for me because this was my last chance. My coaches and everyone back home were waiting for me to qualify and they were confident as well," said Bisla, who came up short in the Asian qualifying tournament in Almaty.

"In Almaty, I was ready but I don't know [what happened], the travel and then I had reduced my weight to 50kg after a long time. Despite that I was trying to motivate myself that I will qualify but my body did not work there. But before coming here, I was confident that I will qualify."

Her coach, Kuldeep MALIK, said he was impressed with her performance.

"She had one of her best days, I have seen this type of defense from Seema after a long time and to counter and win two points was good," Malik said. "Her attack was good but defense was better."

Ecuador can certainly be proud of the effort turned in by Yepez, who held on for a nail-biting 6-6 win on big-point criteria over Patricia BERMUDEZ (ARG) in an all-South American clash in the other 50kg semifinal.

Yepez went ahead in the first period with a single-leg takedown and nifty 4-point reverse spin throw. Bermudez, a two-time Olympian, used an effective arm throw to tie the score with three 2-point moves, but it wasn't enough to trump the 4-pointer.

The other Olympic spot at 57kg was earned by Mathilde RIVIERE (FRA), who gave France just its second ticket to Tokyo by scoring a takedown in each period and handily defeating Giullia OLIVEIRA (BRA) 5-1.

Hristova started off with four points off a cradle in a manhandling of Adela HANZLICKOVA (CZE), finishing off a 12-2 technical fall with :04 left in the match, while Manolova scored a takedown and roll early on before defeating Zhamila BAKBERGENOVA (KAZ) 5-3.

The tournament continues Saturday with the Greco-Roman competition.